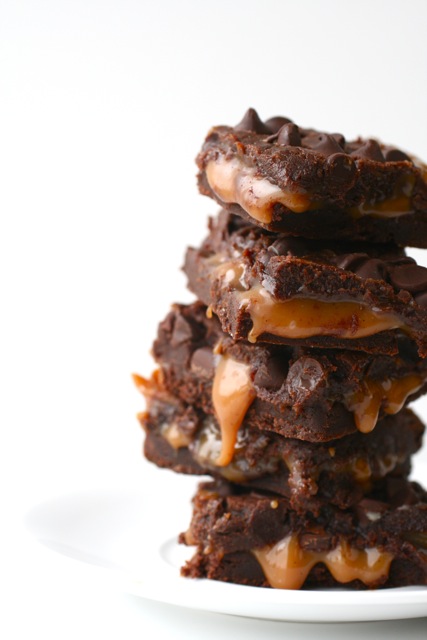 Sometimes I feel that simply the name of a recipe and the photo of said dish are really all you need to know.  This is one of those times.  If the combination of caramel and brownies isn’t enough to get your attention, you may have wandered onto this blog by mistake.  A couple of weeks ago I was having a rough time of it.  I’ll spare you any details but suffice it to say, it was one of those times when an ooey gooey chocolate dessert was in order.  These have been on my “to try” list for over a year and they were the first thing my mind jumped to when pondering the appropriate dessert therapy.  I didn’t want to run to the store and by some wonderful turn of fate, I had every single ingredient on hand.  Not only that but this recipe used up the half bag of store bought caramels sitting in the pantry.  (I also ended up using some of the homemade caramels I had left over from the holidays and for the record, they still taste awesome.)

Normally I never, ever make a half batch of brownies.  It just seems like a bad idea.  But that is what my pantry was able to provide this time so that is what I did.  I made them in an 8×8-inch pan and it worked perfectly, no change in the baking times or anything.  Now, the original recipe calls for pecans to be added to the top layer of brownies but if you are a regular reader you already know my thoughts on adding nuts to an already perfect chocolate dessert.  I have still included the pecans in the version below though because I actually think they would be okay here – kind of a turtle brownie concept.  Whichever way you choose to make them, please do make them.  I know you’ll love them.

slightly adapted from The Pastry Queen by Rebecca Rather