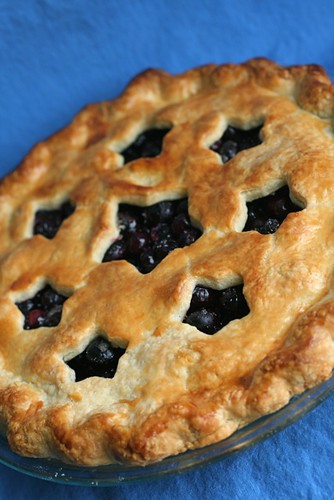 So this pie has quite a story behind it.  Months ago before I owned Baking: From My Home to Yours by Dorie Greenspan, I was browsing through the book in Barnes and Noble.  As soon as I saw the picture of her blueberry pie, I knew I had to have that book and I had to try that recipe.  Fast forward to June 17, the day I went into labor.  I made both Dorie’s blueberry pie and my old favorite peach pie for a cookout that Ben and I were going to that evening.  We brought the pies to the get-together, but ended up leaving for the hospital just 45 minutes after we had arrived.  We left the pies there but the rest of the guests felt bad eating them without us, so they froze them and planned to bring them back to us after the baby had arrived.  They did just that and let me say, I am SO glad no one at the party ate that blueberry pie.  It was AWFUL.  And not just because it had been frozen for a week, it was just not a good pie!  The filling was actually gritty from the large amount of flour and sugar intended as a thickener, and the lemon flavor was far too strong.  What a disappointment!  I was so looking forward to a perfect blueberry pie but that was not it.

I told my great friend Chelle about the disappointment, and we decided to try another blueberry pie recipe “together”.  (I mean “together” in the internet sense because she lives nearly 5 hours away, but we had a great time anyway :-P ) I’m really glad I gave it another go because this recipe was just what I was hoping for.  The pie crust is the one I have always used and it has never failed me.  Plus, it can be made in a stand mixer in a matter of minutes, which I love.  I do a lattice on almost every pie I make so I decided to try something different this time and I thought the little heart cut-outs were a cute touch.  The pie filling tasted fantastic!  The blueberry flavor was perfect, and the lemon and cinnamon added a nice complexity.  The filling was also juicy without being too runny.  So, while I am disappointed in my first pie failure, I’m glad I ended up finding this recipe and having some fun with my friend :-)

Line the bottom of a 9-inch pie pan with one of the rolled-out dough rounds. Set pan aside in a cool place until ready to fill.

To make the filling, place the blueberries in a large bowl, sprinkle with the lemon juice and toss to coat evenly. In a small bowl, stir together the sugar, cornstarch, lemon zest, salt and cinnamon. Sprinkle the sugar mixture over the berries and toss to distribute evenly. Immediately transfer to the dough-lined pan. Dot with butter pieces. Place the remaining dough round on top of the pie and trim the excess from the bottom and top rounds. Crimp the dough rounds together to seal the edges. Be sure to cut vents in the top crust to allow steam to escape during baking.

Refrigerate the pie until the dough is firm, 20-30 minutes. Position a rack in the lower third of the oven and preheat to 375°. In a small bowl beat the egg and water with a fork to make an egg wash. Brush onto the top crust just before baking.

Bake the pie until the crust is golden and the filling is thick and bubbling, 50-60 minutes. Transfer to a wire rack and let cool completely to set, 1 to 2 hours. Serve at room temperature or rewarm in a 350° oven for 10 to 15 minutes just before serving.

Note: If fresh blueberries are unavailable, use frozen blueberries (without thawing) and increase the baking time by 10-15 minutes.