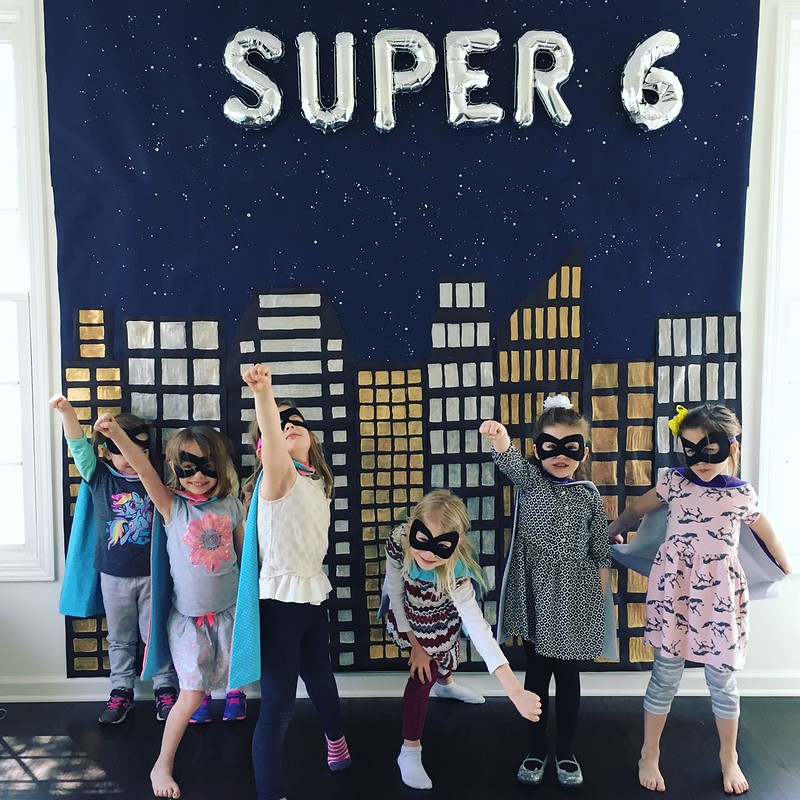 Hey! Caroline turned six and I’m finally getting around to writing about it! (See below for more on that.) Oh, this sweet girl of mine is a ball of energy with loads of personality and sass. When I asked her what party theme she wanted, she bounced around with a few ideas and finally settled on super heros! I could hardly think of a more fitting idea, so we went with it. We didn’t want to go the route of trademarked heroes, particularly since the majority are traditionally male, so we went for colorful, fun, and generic super powers. Even better.

Happily, my niece was born the week leading up to the party and I was able to be at the hospital to meet her shortly afterward. Unhappily, work was completely insane in the week leading up to the party. Due to both of these factors, I didn’t have nearly as much time or energy as I would have liked to put into party prep. Even keeping it simple, I was still fairly pleased with how things turned out. More importantly, Caroline had a blast with her friends and that’s all that really mattered. 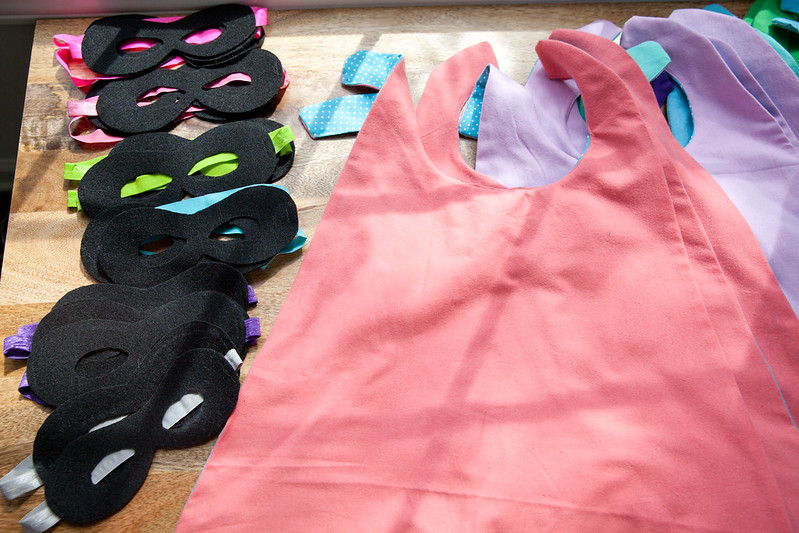 I didn’t get much planned as far as party activities went, but we had truly perfect weather for the occasion (especially for the first week in April!) so we mainly just let the kids run around outside in the yard and pretend to be super heroes. Fun for them and easy for us!

Since I didn’t have a bunch of fun games and activities set up like I had hoped, I did want to have one concrete thing for them to work on. I sewed super hero capes and masks in a variety of colors (made a hybrid self-drafted cape pattern inspired by several free versions I found on the interwebs). We had several sets of fabric markers for the kids to decorate their capes and they had such a blast doing it! I considered letting them also use fabric paints but then decided against it so they wouldn’t have to wait for them to dry and could change into their super alter egos stat! 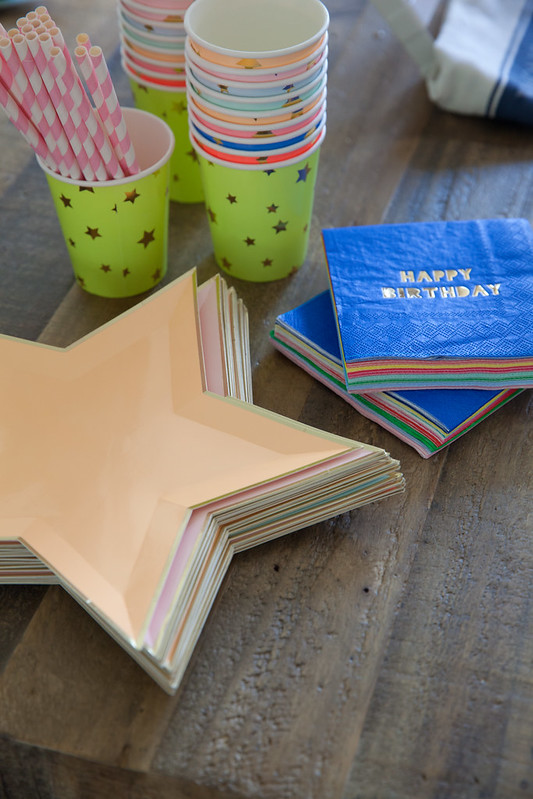 As I said above, details were kept pretty simple due to time constraints but a variety of fun party supplies is an easy way to bring any event together. Loved all these fun plates, cups, and napkins (vendor details below). 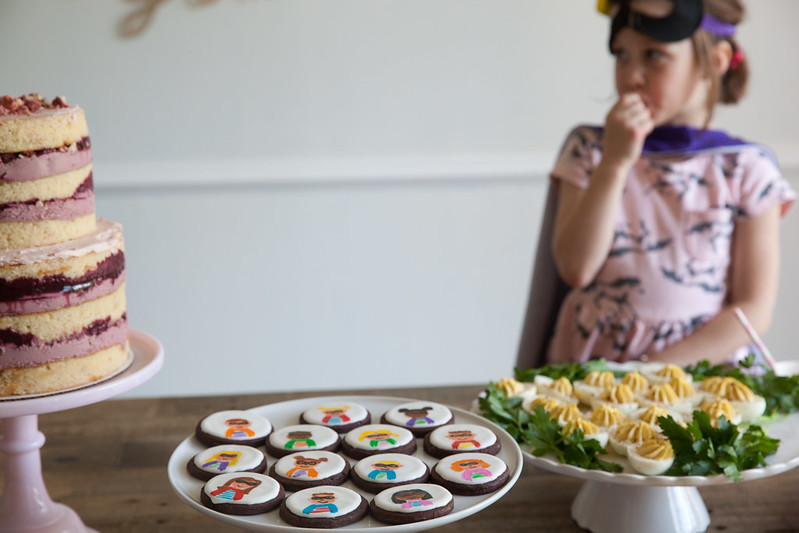 Food was kept soooo simple. We grilled hot dogs and had a huge platter of fruit, a plate of veggies, and of course, deviled eggs. No Annie party is complete without deviled eggs because really, they are for me. 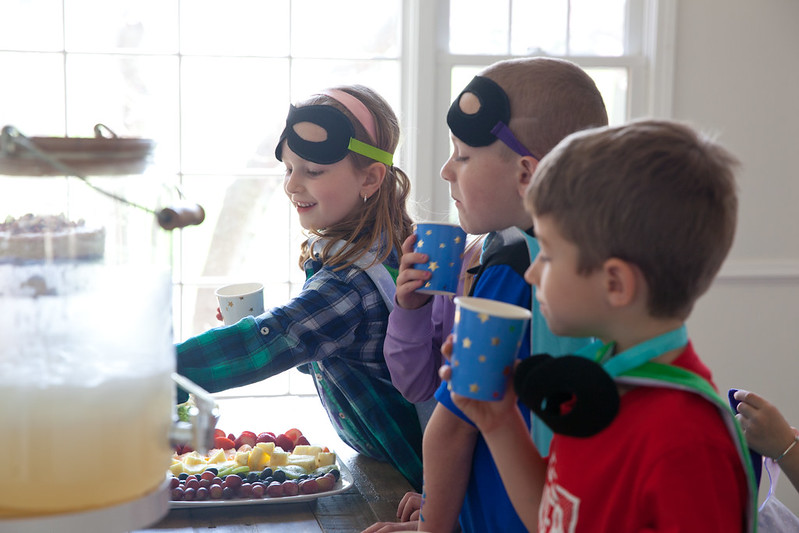 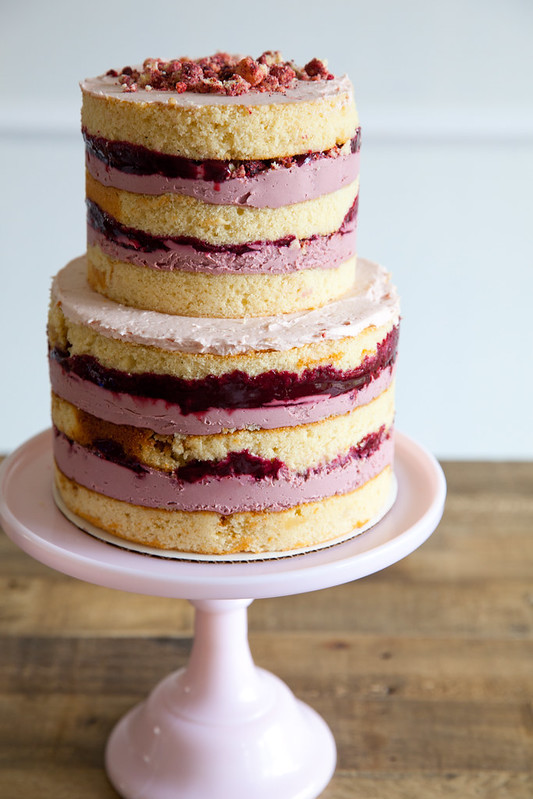 Caroline and I had recently tried a blackberry layer cake that we loved at our beloved Cake Bake Shop, so we decided a homemade version would be perfect for her party. Her party was at the tail end of her school’s spring break and as such, I expected low attendance. However, TONS of kids came and I panicked and ended up making two tiers. So glad I did because 1) we needed it, 2) tiered cakes are just so striking, and 3) too much cake is not a thing. Recipe is here; note, for a tiered cake I made one regular 6-inch cake and one 8-inch cake using a 1.5 batch recipe. 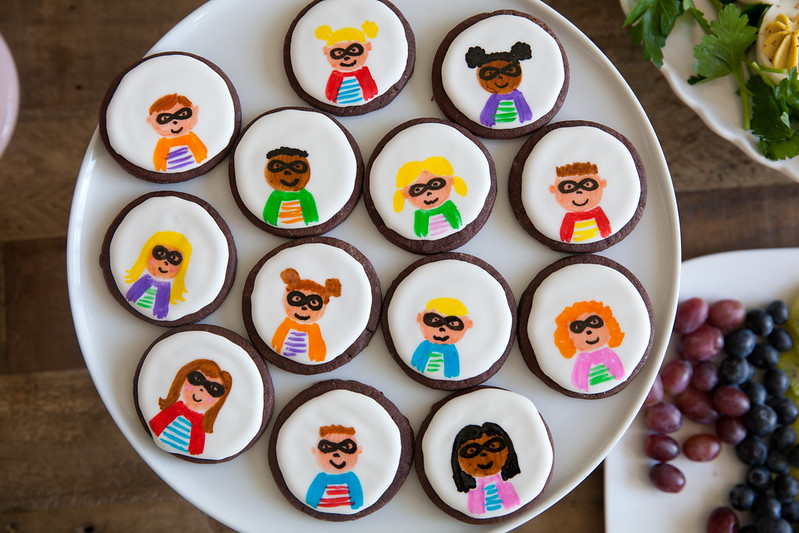 These little super hero cookies were a little idea that came to me rather randomly and I simply couldn’t stop thinking of them. I baked chocolate sugar cookies, flooded them with a layer of plain white royal icing, and then drew the cute little people on them with a set of edible markers. The kids went NUTS for these. I made enough for the kids to have one each, but it was a good thing I had extra plain flooded cookies set aside because they were begging for more. I ended up drawing on demand, like some sort of caricaturist or something. It was fun and so silly!

My darling Caroline, I think you absolutely are super and I am always excited to see what you will do next!

Note: My lovely readers, I truly apologize for the silence here lately. I don’t want to make excuses, but I also don’t want you to think I don’t want to be here! That couldn’t be further from the truth. There are several contributing factors to my absence:

I hope to be back to posting more regularly very soon. At least now I have a finished kitchen which should help A LOT!