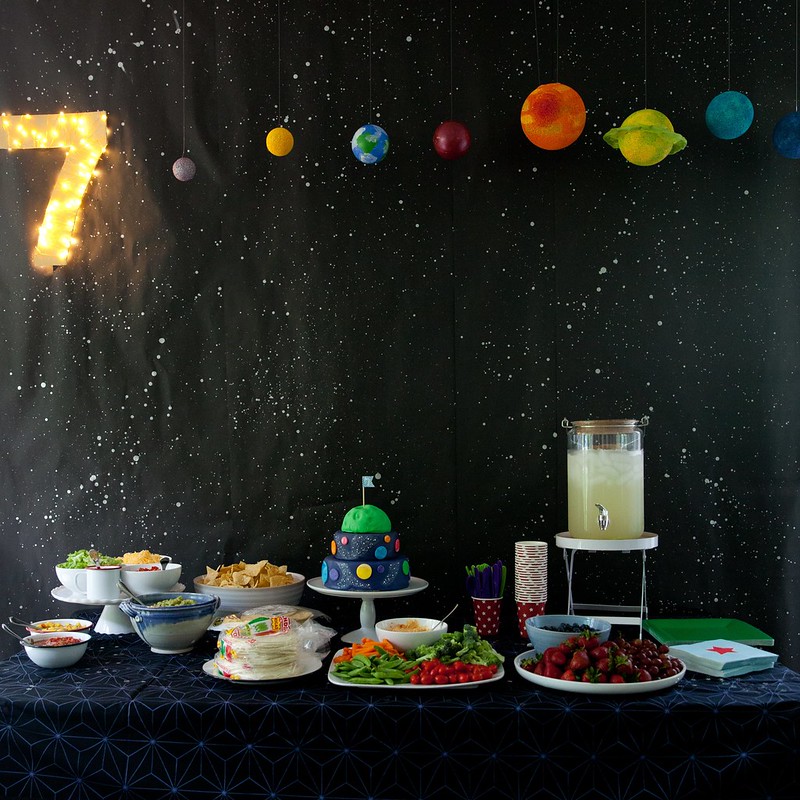 Another year has flown by and at this point, I’ve stopped even trying to comprehend where the time is going. Our boy is seven. SEVEN! I’m sure I will blink and he will be graduating from college. This does not seem like an exaggeration. As has become his habit, he has been talking all year long about what sort of theme he would choose for this party. (He pretty much started that discussion the day after his sixth birthday party.) He has been interested in outer space for a long time and this theme has been the front runner all year long. Just before mailing out the invites, he almost changed his mind to a taco party which I was all for, but then I suggested just combining the two. Space party with a taco bar for lunch. Sold! 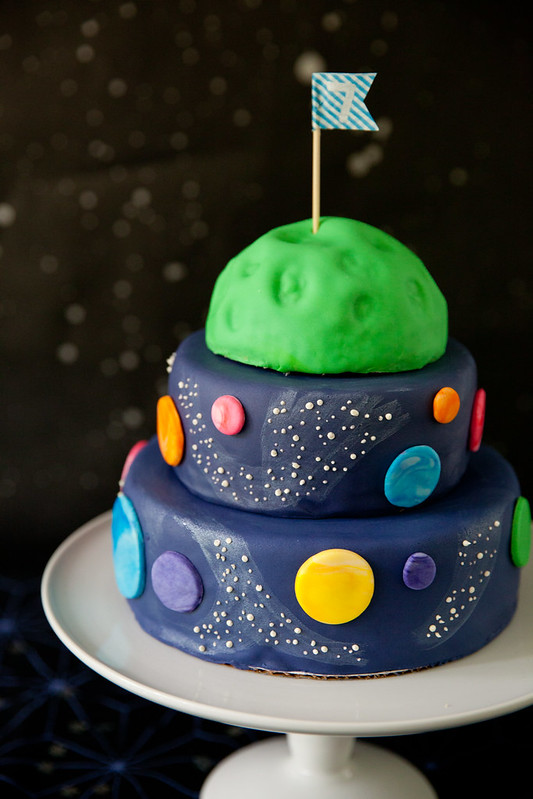 Andrew remembered a similar outer space cake that I made a few years ago and begged me to recreate it for his party. No problem! I love this cake because, though it looks impressive, it is actually quite easy since it is covered with fondant and all of the shapes involved are circles. The cake layers were chocolate at his request (from the classic chocolate layer cake recipe). Between the fondant planets, I painted the cake with a bit of pearl dust for shimmer and then piped on little dots with left over vanilla buttercream to look like stars.  The planet on top is a rice krispie treat shaped in a bowl instead of a flat pan. This doubled well as a nice dessert option for our gluten free guests! 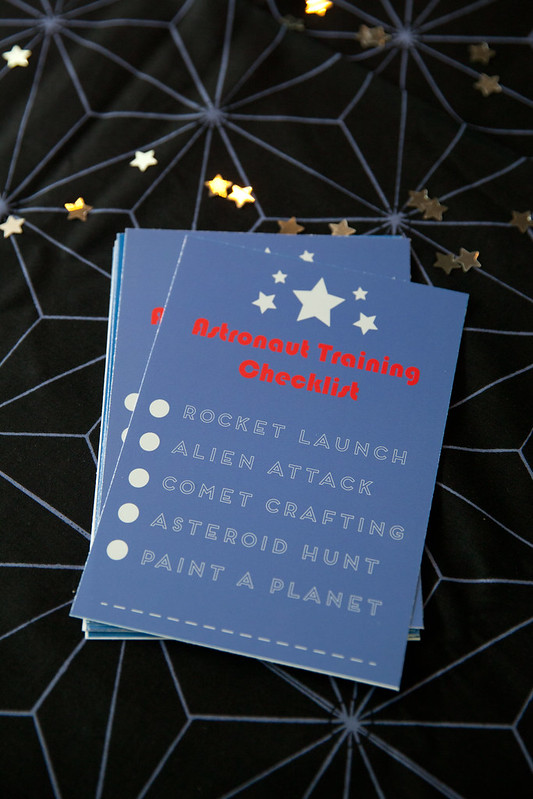 I tried to come up with some fun activities to keep the kids busy throughout the party, and we decided to frame it as an astronaut training program. We included a rocket launch using this toy which provided nearly limitless entertainment, alien attack (read on below), making a comet out of foil and ribbon, asteroid hunting (basically just like an egg hunt but with bouncy balls for the kids to keep), and planet painting (more below). I am happy to say, the activities went over very well and the kids had a ton of fun! We just let them bounce around from activity to activity as they liked without trying to get them to all do the same thing at once and it worked out great. 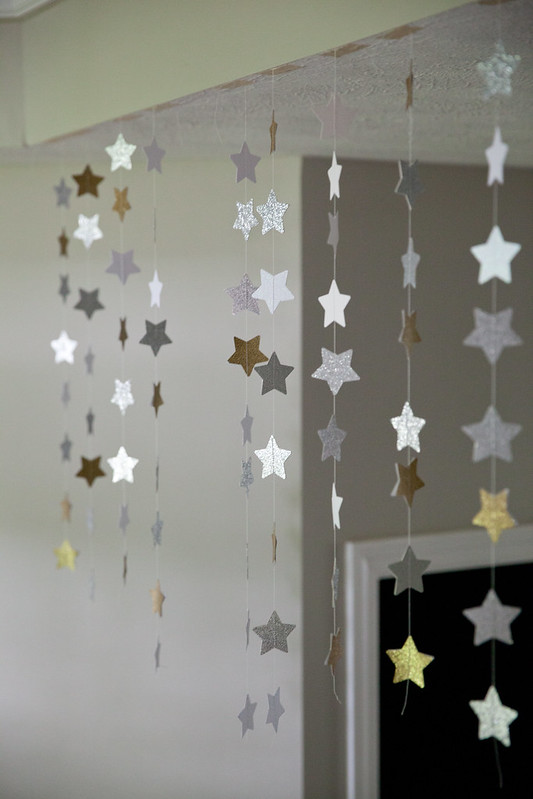 These little star garlands were a fun addition to the decor in the entryway. I bought glitter cardstock in white, silver and gold colors, cut out stars with a large punch, and then sewed them into garlands on my sewing machine, doubling up the stars so that two glitter sides were facing out and the wrong side was not visible. 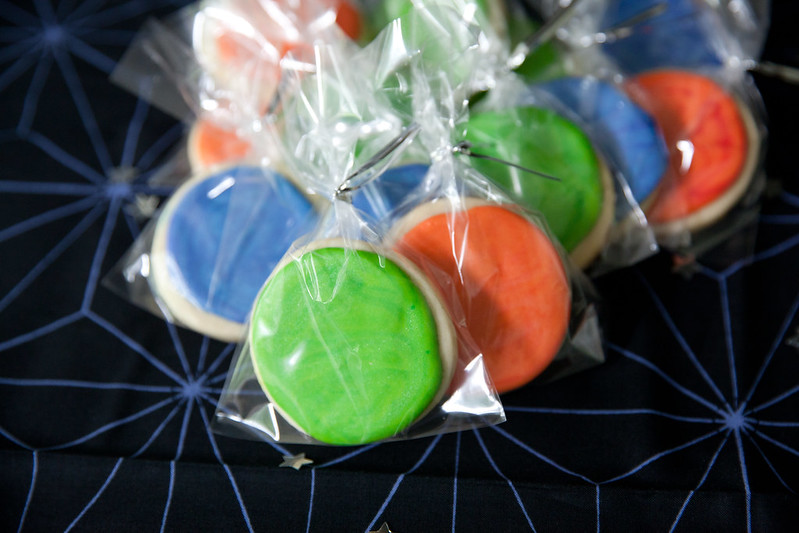 I couldn’t resist including some sugar cookies with royal icing in the favor bags we gave out. I didn’t have much time to prep this party so I kept these super simple with plain round cookies to look like planets. I purposely left the gel icing color unevenly mixed so that it would give the somewhat marbled effect similar to that of the gaseous planets. 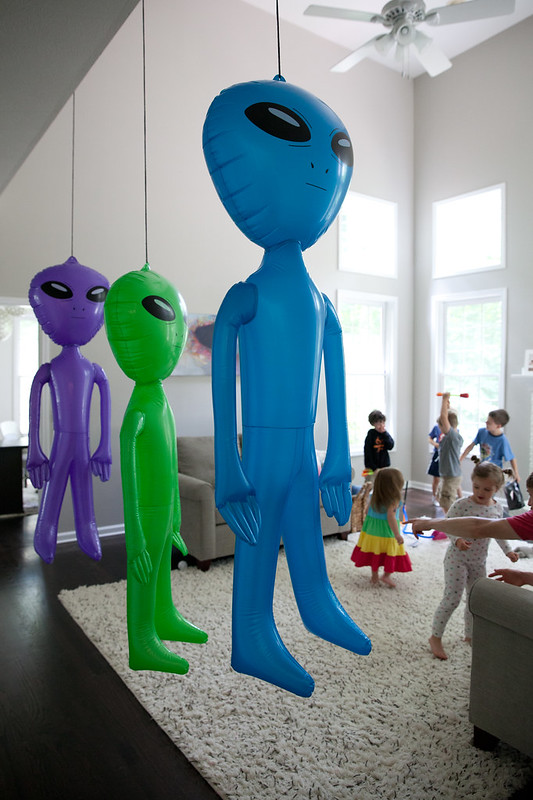 These blow up alien dolls were a spur of the moment Amazon purchase and they might be my favorite part about the whole thing. Did these things ever crack us up!! We used our air compressor to blow them up quickly and for the days leading up to the party, Ben had a great time using them to scare me repeatedly. They miraculously stand up on their own, so every time I came out of a room, an alien would be standing at the door when I opened it. Simultaneously hilarious and terrifying. For the “alien attack” activity, we just hung them from our balcony and let the kids throw whiffle balls or their comets at them. Simple, fun, and again, hilarious. 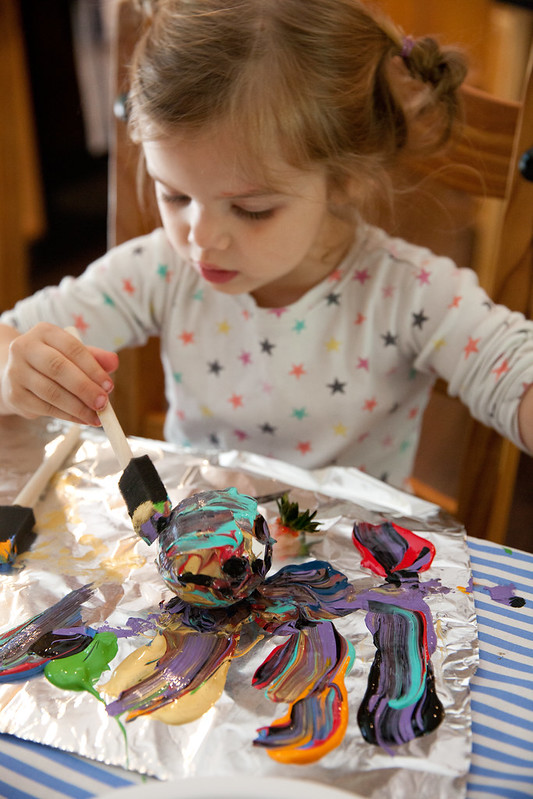 Planet painting was just letting the kids go nuts with craft paint, sponge brushes and extra styrofoam balls. Comet crafting isn’t pictured, but basically we had precut lengths of metallic ribbon in a variety of colors. Kids held the ribbons together at one end, crumbled a piece of aluminum foil around them into a ball to form the comet and its tail, and that’s it! They were pretty and flew very well when thrown because of the light weight of foil.

The solar system background was definitely my other favorite part. I used left over chalkboard paper from last year’s party where we had used it as a table covering, thinned out some metallic water-based craft paint, and splatter painted it. So quick and easy and I absolutely loved the way it turned out! The seven acting as the sun is a piece of foam board I cut out, painted metallic gold and added gold glitter to help give off more light. I wrapped it with these lights and then ran the cord behind the craft paper so it was inconspicuous. The solar system itself is just styrofoam balls from the craft store sponge painted in a rough imitation of the planets. Saturn’s ring is made with toothpicks with ribbon hot glued around the circumference. Though Jupiter and Uranus should technically also have rings, my fingers couldn’t take any more hot glue burns so I just called it good. Real astronomy buffs, look away. I hot glued clear monofilament for jewelry making to the top of each planet and used that to hang them from the ceiling. 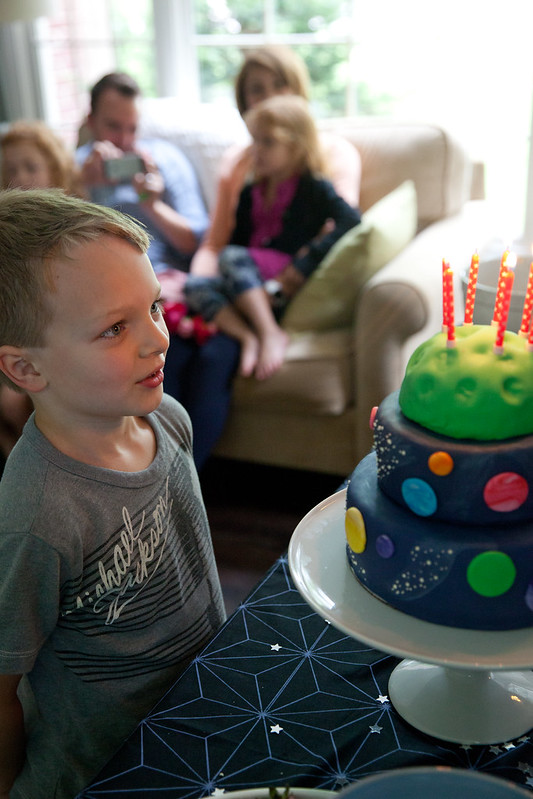 This boy is such a light in our lives and we are so proud of him. I am so happy that his space party was everything he hoped for and that a great time was had by all. Thanks to all of our family and friends who celebrated with us and helped make this such a special day. We love you all!