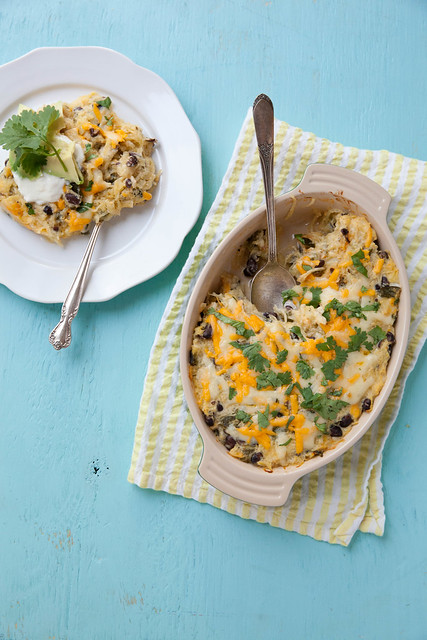 Ah, spaghetti squash. When I first came across it I was skeptical. I constantly see it billed as being just like pasta, but healthier because it’s squash. The first time I tried it my suspicions were confirmed. It had potential, yes, but it was really not “just like pasta”. Similar to kale, it needs a bit of TLC before it lives up to its potential.  I’ve been playing around with different ways of preparing it to make it better than just okay. I wanted it to be great. For me, one sure fire way to make almost anything food better is to incorporate other favorite foods – black beans, poblano peppers and gooey melted cheese are a great start. 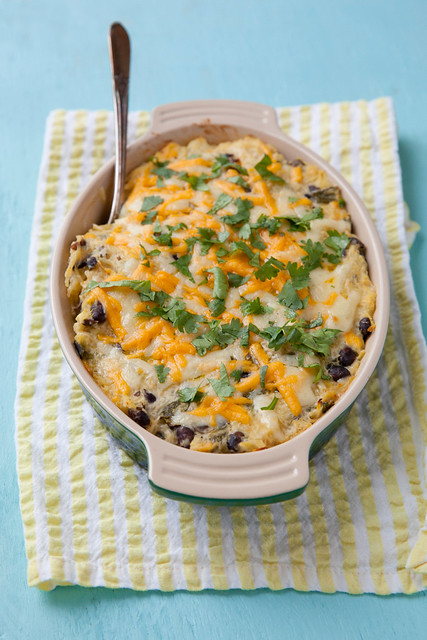 Roasting the squash does take some time, but that’s okay. It gives you time to get everything else ready for the rest of the recipe and maybe even relax for a bit. The roasted squash is briefly drained, mixed with a fantastic spiced compound butter, black beans and roasted poblanos. I included greek yogurt for a bit of creaminess but sour cream will work too. Top with cheese and pop back into the oven until it’s all kinds of melty goodness.  Finally, spaghetti squash is more than just okay for me – it’s actually crave worthy.

Also, just a reminder that the Fair Trade Fashion giveaway is ongoing and will be open for one more day. Don’t forget to enter!