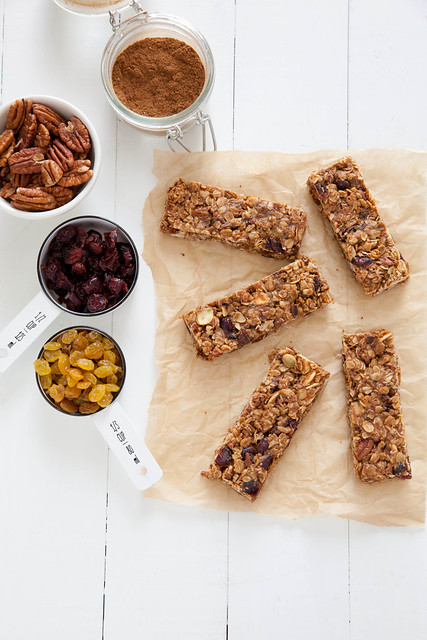 Here’s the deal. I normally don’t get that excited about granola bars. Yes, I eat them on occasion, but more often than not, that choice is borne of necessity. I’m on the go, haven’t had a chance to eat and know I won’t for a while – a granola bar is an easy, (should be) healthy choice. Given that I make all sorts of staple items from scratch, you might think I’ve been making granola bars for years. They seem simple enough right? Oats, some nuts and fruits, stuck all together and sliced into bars. Yes, they seem simple but at least in my experience, that hasn’t been the case. I’ve tried so many recipes from normally reliable sources but found trouble at every turn. Mushy, dry, too sticky, not sticky enough, too full of sugar, and the list goes on. I had nearly given up hope but decided the prospect of a pumpkin spice granola bar was enough to coax me to try again. 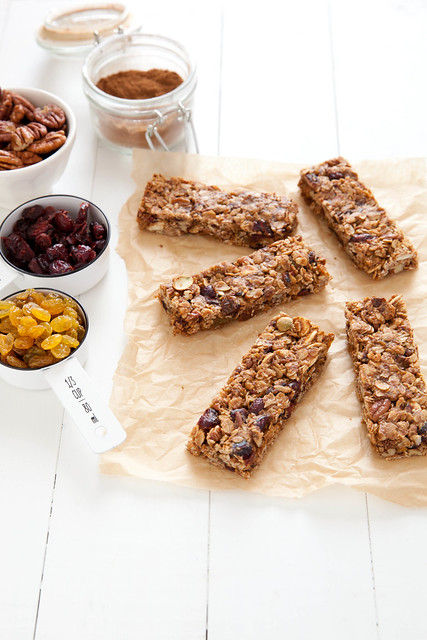 After reading about ratios, binders, and more until my eyes crossed, I came up with a game plan, tested it out, and waited nervously to see what the final result would be. I’m pretty sure I heard choirs of angels sing when they came out of the pan intact (yay!), sliced neatly (oh yes!), and had a perfectly chewy texture. The bars are naturally sweetened with dates, honey and maple syrup so there is no need for added sugar, another advantage compared to most commercial bars.

Now, lest the pumpkin spice police get up in arms – I did not actually use pumpkin in these bars. The flavor is so mild that you would need a lot of pumpkin to actually make a difference and the moisture of the puree is something I wanted to avoid for fear of affecting the integrity of the bars. The pumpkin pie spice and pepitas are pumpkin enough for me, but if you require pumpkin, feel free to substitute a few tablespoons of pumpkin puree for the sunflower seed butter. Be warned, they may not hold together as well. Now that I have the base recipe figured out, I’m excited to play around with other flavor combinations and different mix-ins. It is so on.