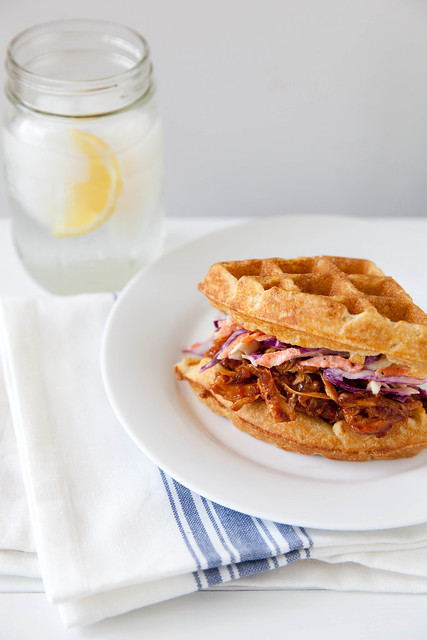 Chicken and waffles. How did that become a thing?  When did it become a thing? Is it a distant relative of steak and lemonade? (Which I also don’t get, by the way.)  To be honest, I hadn’t even heard of chicken and waffles until a few years ago. Prior to what you see here, the only time I have actually tried the combination was Thomas Keller’s version, a couple of years ago at Bouchon in Vegas.  Pretty nice introduction if you ask me.  Given my relative inexperience with all things chicken and waffles, it was pretty surprising when the idea for this meal materialized in my mind out of absolutely nowhere. 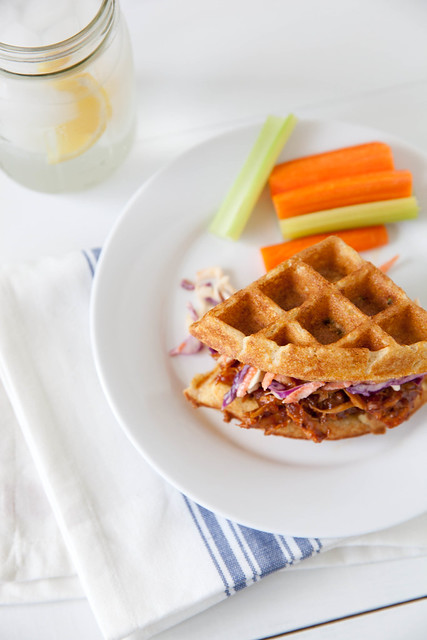 It may have had something to do with the container of leftover barbecued chicken getting jostled around my freezer every time I dug for something else, something better. Whatever the reason, I’m so glad the thought occurred to me. Okay, so the chicken and waffles part came easily – but what else on it?  This part took some brainstorming but ultimately the idea of a very lightly dressed slaw came to me…like cole slaw, but not because yuck.  I’m happy to report that the whole shebang worked just as well together as I had hoped. The flavors and textures were a great combination, and of course, the kids thought it was totally cool to eat waffles as sandwiches.  These are a fun alternative to the usual barbecue sandwiches served in the summer.  Let’s make this a thing! 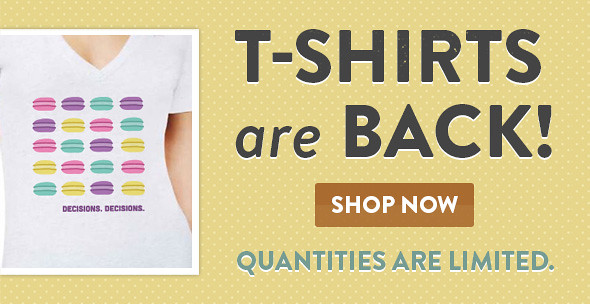 PS – Shirts and onesies are selling fast. They’ll probably only last another couple of days so get yours before they are gone!

waffles from Joy the Baker