We’re all familiar with what is typically known as Mexican seven layer dip, right?  Usually it has a layer of refried beans, maybe guac, sour cream, various cheese and veggies on top.  Ben’s mom has been making a version of this for as long as we’ve been together (over 15 years now!)  I swear, for something so simple, I have never been able to make it taste quite as good as hers whenever I attempt to make it myself.  She has to be the one to do it.  Last week I was pondering all sorts of food ideas, and suddenly I had a major lightbulb moment – why not update that classic dip with flavors that are a bit more interesting?  Don’t get me wrong, I love the original, but it could use some freshening up. 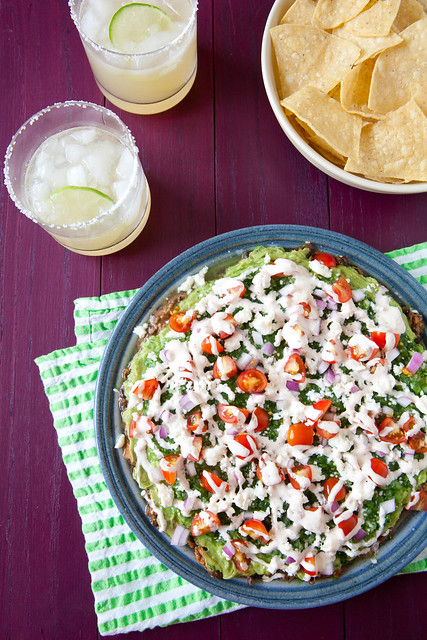 The first order of business was the bean layer. Instead of refried beans from a can (you can do better!), I made my own extra quick version but instead of bacon I used chorizo.  Because is chorizo ever the wrong answer?  No, of course not. Guacamole used to be a sticking point for me but I’m a reformed guac hater turned addict, so a layer of that goes on top of the beans. Next comes a thin layer of fresh tomatillo salsa, followed by a sprinkling of queso fresco, red onion and chopped tomatoes. The finishing touch (and quite possibly my favorite) is a generous drizzle of chipotle lime sour cream.  As much as I love all the components separately, I wasn’t sure whether they would really work all together.  Now that we have tried and devoured it, I can safely say that I think this version is a great improvement. It’s fresh and the flavors all work so very well together. No matter what your plans are for Cinco de Mayo, I’m pretty sure they should include this dip.  Just like chorizo, this is never the wrong answer.

Mix It Up – Some variations to try:

For the sour cream: