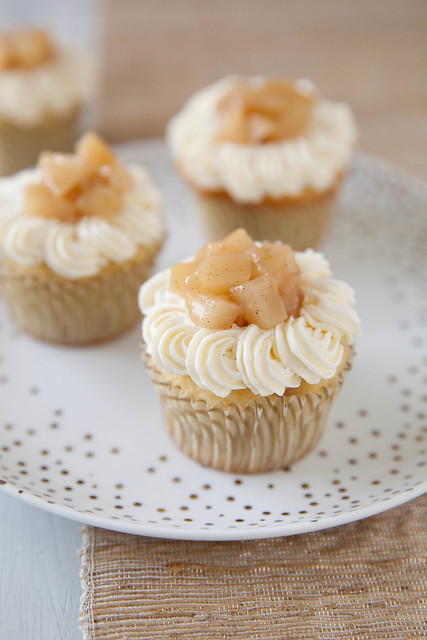 I’ve mentioned before the crazy long and ever-growing list of cupcake flavors, past and present, that I have compiled.  My coworkers use it as a guide when choosing a treat for their birthdays.  Every so often I’ll add a handful of new ideas to the list, and when I do this, I tend to get on a roll.  Ideas just start coming – some specific, concrete ideas I have seen elsewhere.  Some are more murky, a wisp of an idea I had in that fleeting moment of brainstorming.  That is how these started out.  Merely a vague thought added to the list, and overlooked for at least a few years by everyone choosing their treat.  Not that I was surprised, of course.  Pear so rarely plays the leading role, and even if it does, it’s tough going up against over the top concoctions or timeless classics.  Imagine my surprise when someone actually chose them! 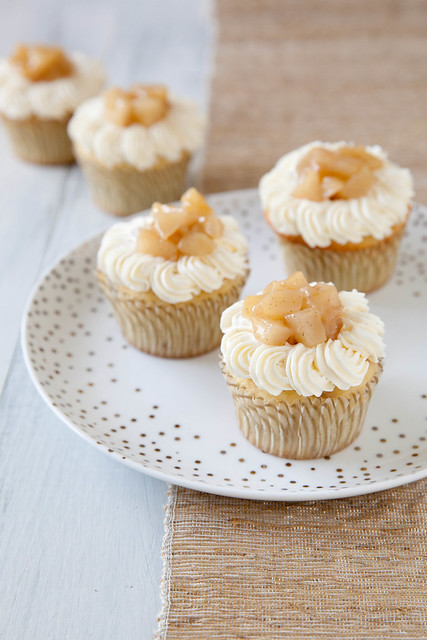 Surprise, and then immediate panic since I didn’t have a concrete idea in place.  Baking with pears can be challenging, helping their subtle sweet flavor shine and not be overpowered by something else.  Cooking pears is always my starting point to accentuate their flavor, so I made some caramelized pears and mixed those in to the cupcake batter.  I used a simple vanilla bean swiss meringue buttercream and then added a quick pear sauce to the top.  I did use a pinch of fall spices in this recipe, because they go so well with pears.  In the end I was really happy with the balance of pear and vanilla and these went over very well with the work crowd.