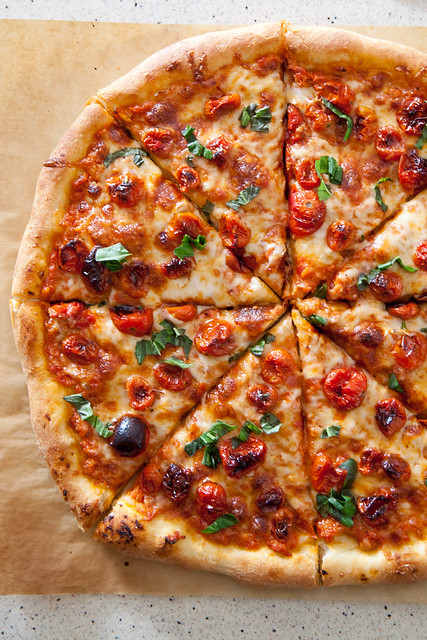 At this time of year, our garden is bursting with produce. Unfortunately since we don’t have the space to have a massive garden a la Ina Garten, the bits of produce coming in are a random hodge podge.  Nearly every day, I pick a few handfuls of tomatoes, a couple of future pickles, and a pepper or two.  I just don’t have the kind of mass harvests I dream of for making huge batches of tomato sauce from my own garden.  Maybe someday, but not yet.  (That’s okay though – we pick up mass quantities of organic tomatoes from the farmers market and play pretend.  It’s all good.)

I’ve been promising Andrew since spring when we planted our garden that we would make a pizza with our tomatoes and basil, and we have made a few traditional margherita pizzas this year.  A couple of weeks ago I wanted that, but better.*  I was also randomly craving pasta a la vodka when suddenly these two ideas combined and it hit me how totally fabulous a pizza could be with a tomato cream sauce.  Like, woah.  I ended up skipping the vodka since we were out and just made a simple tomato cream sauce.  Rather than topping with fresh tomatoes I used oven roasted tomatoes since, you know, I put them in everything.  (Yet another recipe coming next week, just FYI.)  Though I may not have buckets of fresh tomatoes, I do have enough to roast for a fab pizza.  As you might imagine if you love tomato cream sauce, oven roasted tomatoes, basil, mozzarella, and oh yes, PIZZA as I do, this was nothing short of spectacular.  Still simple, but just better.  I adore this pizza.

*For the authenticity police who will exclaim no! This is not pizza margherita…I know, and I’m okay with that.