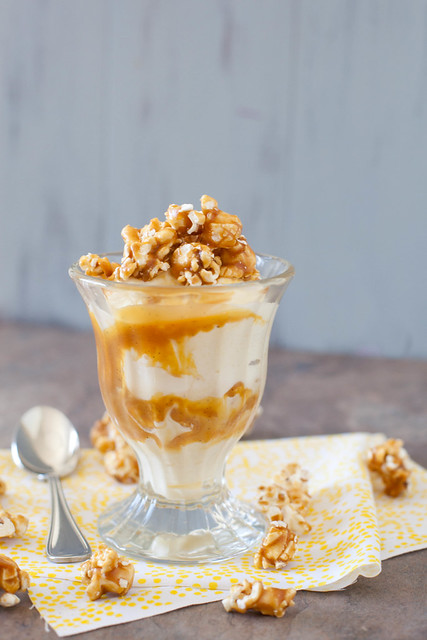 July is generally not one of my favorite months of the year.  While it beats the gray, freezing winter months no contest, I wouldn’t consider it top tier like October (swoon), April, May or June.  This year, though, I’m finally starting to embrace July more than usual.  I’m not aching for fall…in past years, that longing has generally set in in early June.  I’m quite sure there are several factors at play making July more tolerable this year.  For one, the weather has been actually really mild and nice – no horrid heat wave like last year.  Of course I’m always grateful for the plentiful fresh summer produce while it’s around.  We’ve been spending lots of time outside with the kids, doing all sorts of fun activities and just playing around.  And then of course, there is the obvious, the thing that makes every July nearly lovable – it’s National Ice Cream Month.

I have a few great ice cream recipes to share over the course of the month, but I wanted to start out with this one because it’s so different than anything I’ve had before.  The ice cream itself is actually popcorn flavored – yes, you read that right.  The cream mixture is steeped with popcorn before the base is finished and frozen.  As a result, this slightly sweet frozen treat is infused with popcorn flavor.  Not creepy fake popcorn flavor like that abomination of a jelly bean, but real popcorn flavor.  Even being the popcorn fiend that I am, I was uncertain of whether this would really be a dessert I truly enjoyed.  The ice cream itself is a little sweet and a little savory, and combined with a handful of caramel corn and a drizzle of salted caramel sauce, it makes for a dessert that is both unique and memorable.  And for popcorn/caramel corn lovers like myself, kind of addictive.  You’ve been warned.