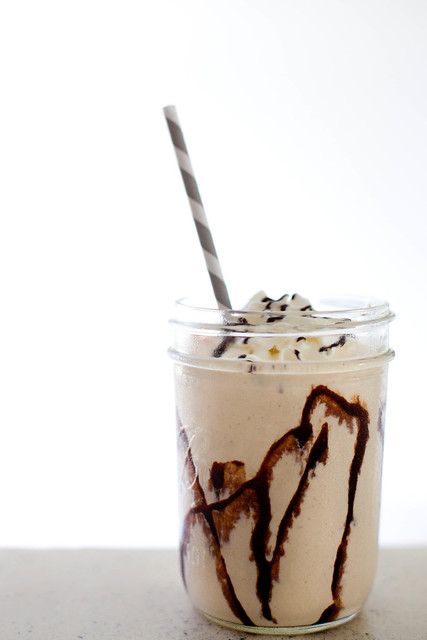 Father’s Day weekend was busy like whoa for us this year.  We hosted Andrew’s fifth birthday party on Saturday (more about that next week), and Sunday we spent the day at a lovely party celebrating Ben’s grandparents’ 65th wedding anniversary where I was the unofficial official photographer.  So yes, lots of fun but overall exhausting.  The kids and I gave Ben a few gifts but I didn’t get to cook or bake him any special Father’s Day treats.  I made up for it though, by making him this peanut butter smoothie.  Why is this smoothie worthy of a Father’s Day gift, you might ask?

Oh, this smoothie.  It all started back in April when we took a short little jaunt up to Chicago for an incredible dinner at Next, the second restaurant created by Grant Achatz (remember Alinea?) along with Chef Dave Beran. We experienced their menu for The Hunt and the meal was truly amazing beyond description (hence why I haven’t written anything else about it.)  We experienced several new-to-us foods that evening, many of which would make most people squeamish…but per the usual of the talented staff they employ, every single bite was an enjoyable adventure.  When discussing it later, Ben and I agreed that we couldn’t even determine a least favorite course because we had loved them all.  What does this have to do with the smoothie?  The morning after The Hunt, we visited a lovely restaurant for brunch recommended by our favorite traveling and eating buddies, Ryan and his wife Andrea.  Ben ordered a peanut butter smoothie and I’m telling you, I haven’t heard the end of it since.  Despite our incredible experience at Next, this smoothie was all Ben could talk about.  He has been asking me to recreate it at home ever since.  Well, it took me a couple of months to get around to it and a few rounds of tweaks, but we finally got result we were hoping for.  Creamy, thick, and very peanut buttery.  Add the drizzle of chocolate syrup and/or whipped cream for extra indulgence.  Ben says: two thumbs up!