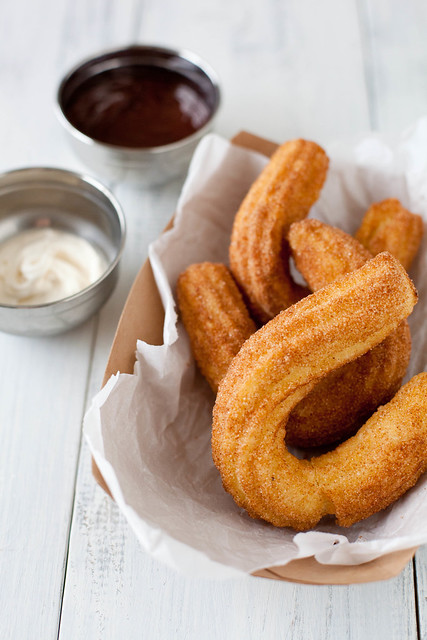 It may be cliché, but I couldn’t resist the opportunity to make churros in time for Cince de Mayo.  Over the past year or so, I’ve become slightly enamored with them thanks to the fantastic churros at XOCO, one of Rick Bayless’ restaurants in Chicago.  Really, fantastic isn’t an adequate word to describe them.  They deserve their own superlative.  A simple piece of fried dough coated in a cinnamon-sugar mixture and dipped in ice cream or chocolate sauce.  Holy moly, they are deserving of the hype.  When we are in Chicago, we always make time for XOCO, even if we’re only there for less than 24 hours.  I was excited at the prospect of making these at home, and I was also curious to know whether they would be difficult.

As it turns out, these are actually easier than most other doughnut-like things.  The batter is mixed and since it isn’t yeasted, it’s pretty much ready to be used right away.  Piping the dough into the hot oil was a bit of a guessing game as to how the shapes would turn out, but I was able to make pretty consistent U shapes without too much trouble.  I almost never make fried things at home but these were worth it. 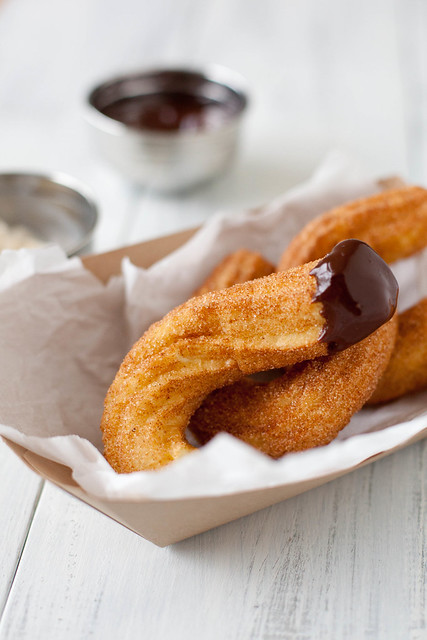 Have you ever made churros?  Or if you have at least eaten them, what do you like to dip them in?  I think the vanilla ice cream is totally the way to go, but Ben likes the chocolate sauce.  I know some people dip them in hot chocolate, which also sounds pretty great.  I hope you all enjoy some amazing Mexican food this weekend.  I know I will!

For the chocolate dipping sauce: