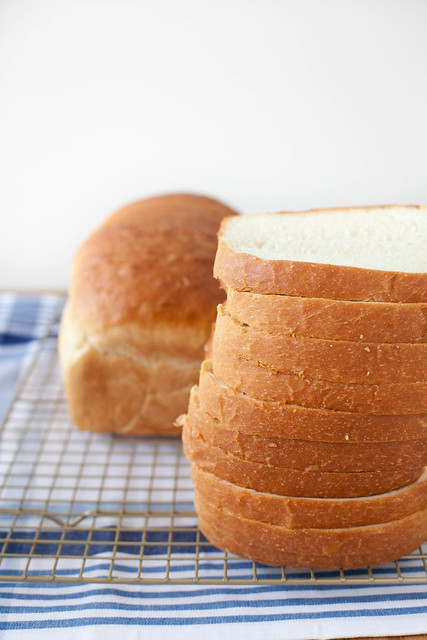 In general I avoid labeling any recipe as “the best”, “the ultimate”, etc. for a couple of reasons.  First off, I of course haven’t tried every type of (whatever it is), so who am I to deem it number one?  Second, I fully believe there are plenty of fantastic recipes out there for just about any food you can imagine, so it’s likely that more than one of them are deserving of such hype.  But I’m making an exception for this recipe, because at least here in my kitchen, this is the best white bread recipe I’ve ever made.  And I’ve made a lot of them. 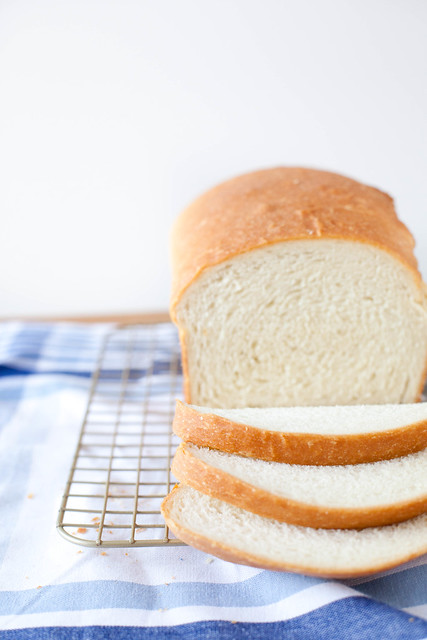 This recipe comes from my awesome friend Shanon‘s grandmother, which makes me love it even more.  Let’s talk about the loaves themselves.  Tall, puffy, soft but not too soft, and a tender golden crust – in short, exactly what I’m looking for in a loaf of homemade bread.  We generally eat white bread only on rare occasions, but I am so incredibly glad to have this recipe in my arsenal now for when those times arise.  The afternoon this came out of the oven, I couldn’t resist doing exactly what my inner child wanted, so I made a grilled cheese.  It was killer.  Though we could have easily demolished the loaf, we dutifully sliced both up, stored them in freezer bags, and now we have bread at the ready the next time a grilled cheese emergency strikes.

(By the way, in case white bread isn’t your thing, stay tuned for an upcoming series on the blog about whole grain baking.  I’m excited about it!)

slightly adapted from The Curvy Carrot