How to Make Fresh Coconut Curls 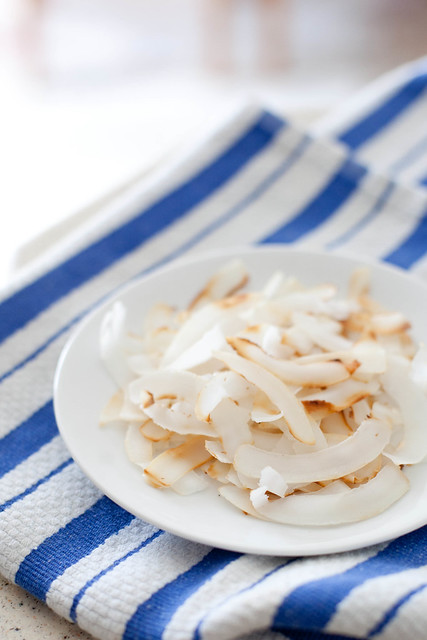 I’m not typically one to be intimidated in the kitchen, or to shy away from a challenge, but one thing that has long intimidated me is dealing with fresh coconut.  I’ve looked longingly at the gorgeous fresh coconut curls atop pretty cookies, cakes, pies and more in magazines and cookbooks and finally I decided enough was enough.  It was time to figure this out.  As with so many things, the biggest obstacle was getting over the mental hurdle of intimidation.  Turns out, the whole process was pretty simple.  Certainly more involved than buying a package of shredded coconut but the results are so much more visually striking.  I know this will be my go-to choice for topping coconut flavored things from here on out.

I know that some supermarkets sell various pre-cut or otherwise manipulated coconuts to make this process more simple.  I wanted to figure out how to work with a regular old coconut in the event that this is the only kind available.  (And it actually was the only kind I saw at the store when I went to buy this one.) 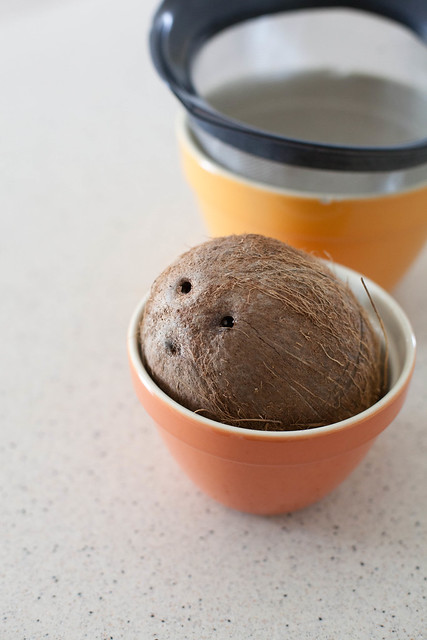 So, let’s get started!  The coconut will have three eyes in the base.  Use the tip of a (clean) screwdriver to poke a hole through the two softest of the eyes.  (You may need to use a hammer to pound the screwdriver through the shell.) 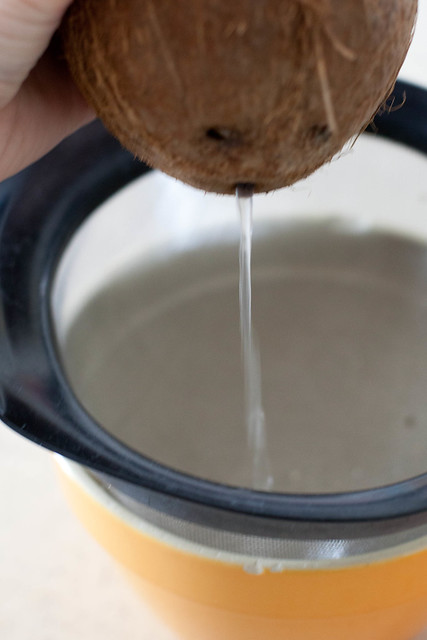 Pour the water/milk from the coconut through a fine strainer into a bowl or cup.  Discard or save for a later use. 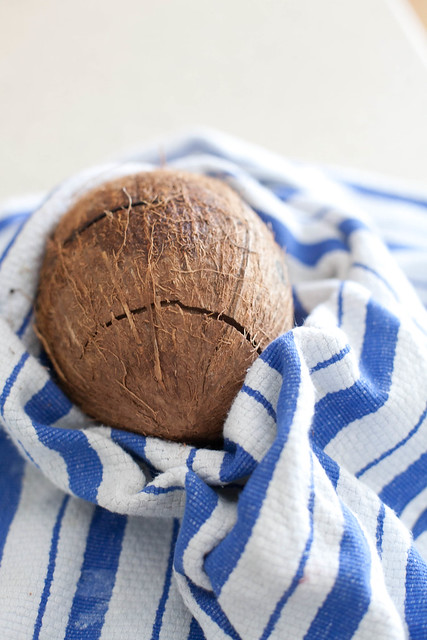 Place the coconut on a baking sheet and bake at 350˚ F until the shell is cracked in multiple places, about 30-35 minutes.  Set aside until cool enough to handle. 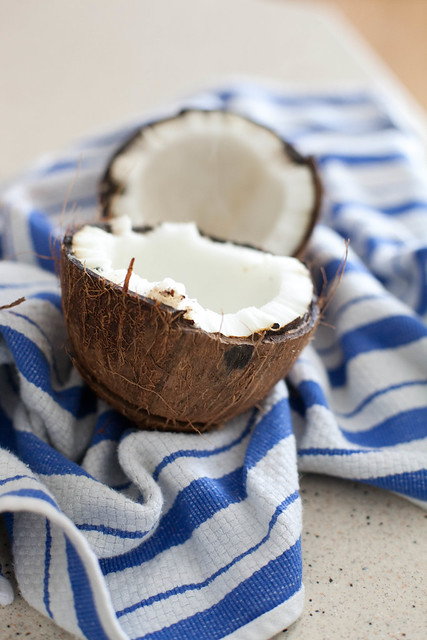 Wrap the coconut in a towel and hit it with a hammer several times in the same place to break it in half or multiple large pieces.  (I just banged it against the edge of our counter and it worked fine.) 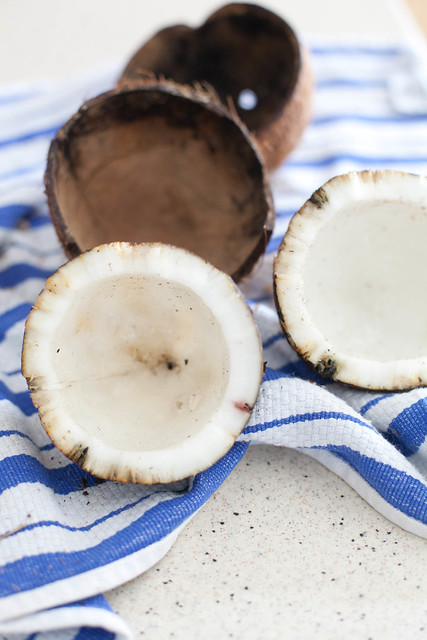 Pry the coconut flesh away from the shell.  (I slid a knife around the inside of the shell to help loosen it and it came out easily.) 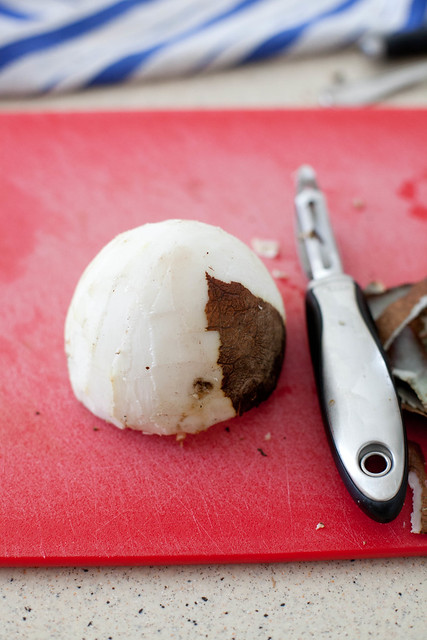 Use a vegetable peeler to remove the tough dark outer skin. 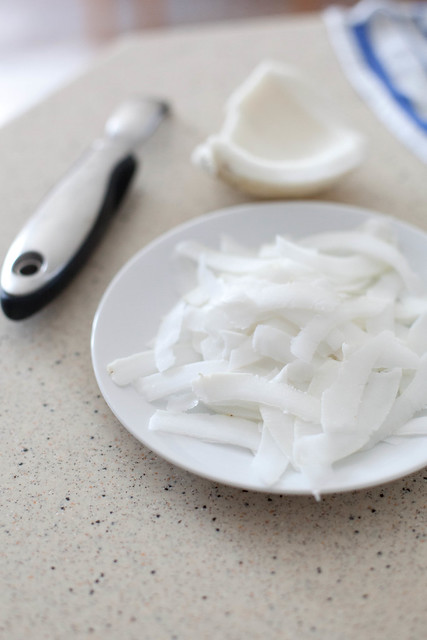 Rinse the coconut chunks and the vegetable peeler.  Peel along the broken edges of the coconut flesh to make long, thin curls of coconut. 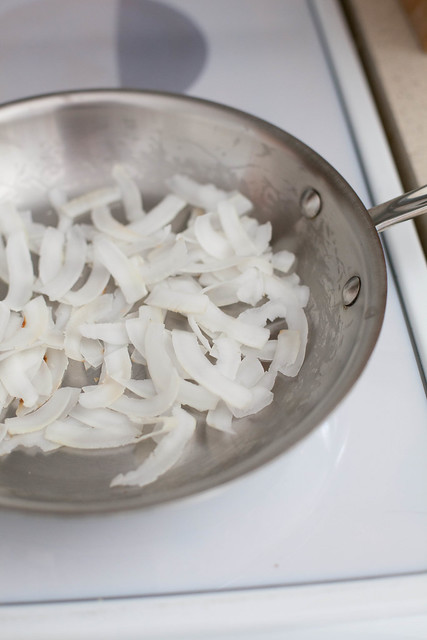 Transfer to a skillet over medium heat and toast, stirring occasionally, until browned to your liking.  Use to garnish desserts, etc. as desired.  (Side note – many recipes will call for coconut to be toasted in the oven but I vastly prefer to do this in a skillet, where I can keep a close eye on the toasting and avoid burning or uneven browning.)