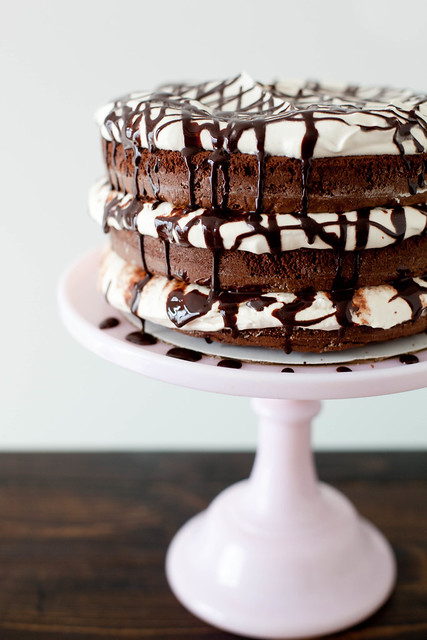 My brother’s girlfriend totally rocks.  She is super fun, as sweet as can be, smart, loving, incredibly gorgeous…  She goes with me to Britney Spears concerts.  She is my perfect teammate for Wii Pictionary (what what?!)  And to top it off, she is a fellow brownie lover who really, truly loves brownies as much as I do.  Her birthday was in early March and obviously brownie something or other was in order.  But this wasn’t just any birthday – it was her 21st.  I started thinking of ways to combine brownies and booze and this was the first idea to strike me.  It was also the last, because really how could I improve upon boozy brownies layered with Kahlua and Bailey’s spiked whipped cream and chocolate syrup?  You’re right.  I couldn’t.

This cake’s outrageousness is ideal for a 21st birthday, but don’t worry – you could just as easily adapt this to make a single layer of boozy mudslide brownies (divide the recipe in half and bake in an 8 x 8 inch pan.)  Because the brownie layers are dense and fudgy compared to the light, fluffy whipped cream, the cake should be assembled just before serving.  (If you assemble it further in advance it will still taste awesome but just be a bit unsightly.)  And obviously, since we’re talking about three layers of brownie, a thin sliver is plenty so there is lots of cake to go around.  This can feed a crowd for sure!  If there are kids or others in attendance who choose not to partake in alcohol, consider baking an extra pan of brownies for them and have vanilla ice cream at the ready.  No one should be left out of birthday fun!

To finish:
Chocolate syrup, for drizzling