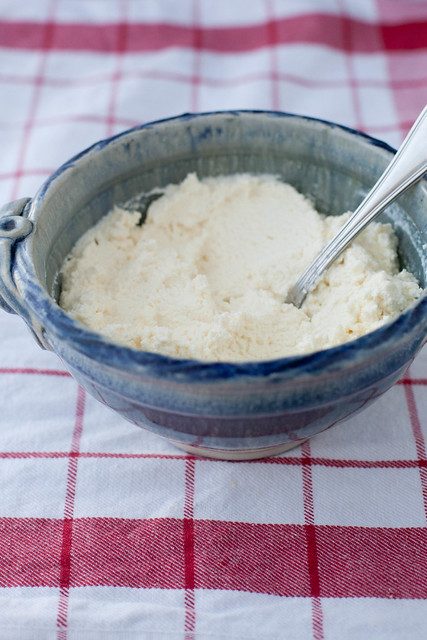 In my never-ending quest to make as much from scratch as possible, I’ve conquered many staples that in the past, I would never have thought possible.  Yeast breads and doughs have become second nature, I haven’t bought bottled salad dressing in a year or two, tortillas are so much better homemade, and I kicked my little yogurt container habit to the curb.  This year, I’m hoping to experiment with at least a couple of attempts at cheese making, and it only seemed natural to start out with what everyone says is the easiest cheese to make from scratch – ricotta.

Now that I’ve done it, I can say two things.  First, it really was easy.  I couldn’t believe how quick and simple the process was, and that it only required ingredients I already had on hand.  And second, this totally took ricotta to a whole new level for me.  I’ve never disliked ricotta, but I only used it in things – lasagna, other pastas, etc.  The usual suspects.   I never just enjoyed it on its own.  But this was so much richer and creamier than the stuff from the store.  Next week I’ll be sharing my new favorite use for it.  In the mean time, feel free to mix in some fresh herbs and garlic, spread on crostini and enjoy ASAP.   Preferably with wine.