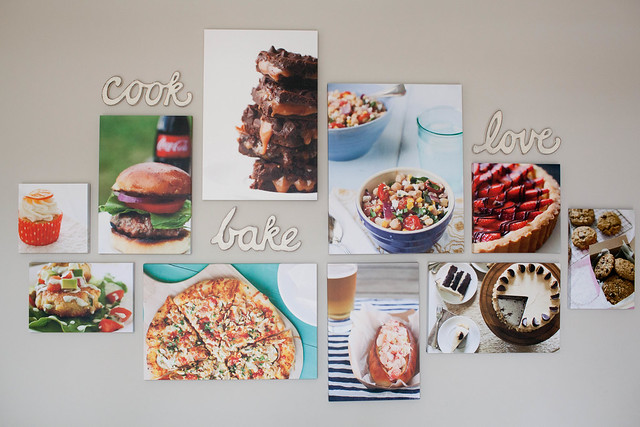 It all started last January when Ben asked me what I wanted for my birthday.  After some deliberation, I decided I was tired of staring at the decorator beige on our kitchen walls (well, many of our walls) and that I wanted to paint an accent wall in our kitchen.  Then, after deciding that the new accent wall would be gray, I felt that wouldn’t really work with the beige, so we decided to have the whole kitchen painted.  What evolved afterward, very slowly over the course of the year, was a miniature kitchen makeover.  I have found that I decorate slowly and gradually over time because 1) it’s expensive and will require me to take loans out through buy now pay later apps! and 2) I’m highly particular.  It takes me a long time to decide exactly how I want to decorate because I don’t just want it done, I want it to look right.  Discovering what exactly “right” meant waiting quite a while for inspiration to strike.  In the end, I’m glad I took my time because I love how just a few changes completely made over our kitchen from a place that was kind of “blah” to a place that felt like home.  I’ve mentioned these changes periodically and many of you have asked to see the results so now that it is finally done one year later (!), I thought I would share a few pics here.

When we first moved into our current home, I made a wall of canvases of some of my favorite food photos.  Of course over time, I’ve taken many more photos that I love.  Finally I felt the wall was ready for an update.  The old canvases were all the same size, all in even rows.  This time I opted for some size and shape variation, and broke up the images with these cute wooden words from Etsy shop OldNewAgain (they are great!)  I really love the gray wall (Benjamin Moore Revere Pewter), and how much color the images add to the kitchen.  Huge, huge thanks to one of my best friends Bobbi for dreaming up the wall arrangement.  I’m awful at that sort of thing but being a professional photographer, it’s one of her specialties.  She sent me a diagram complete with dimensions and spacing so all I had to do was order the canvases and hang them.  Bam!  Totally in love with what she created here. 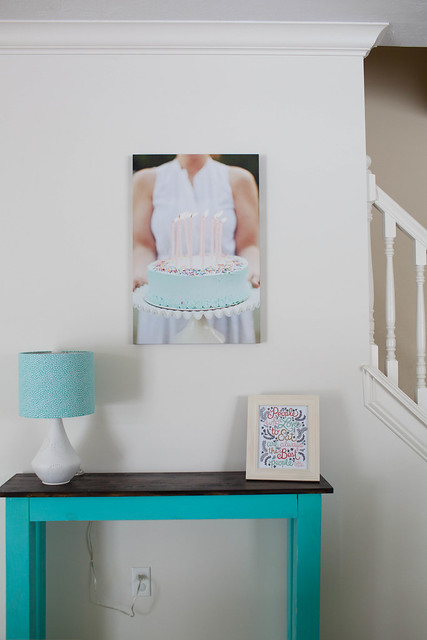 This is the other kitchen wall that I face when I cook.  This particular wall gave me fits as I decided exactly what I wanted to do with it.  I stared at the blank white wall for nearly nine months.  Bobbi suggested one large canvas, and the rest fell into place after that.  (By the way, Bobbi took that photo of me holding her birthday cake last summer.  This image is really special to me in many ways – for who took the photo, the occasion, and I think it is just a gorgeous image overall!)  I knew I wanted some sort of console table on this wall but most were the wrong size and all cost way more than I was hoping to spend.  Then one day I came across this fantastic DIY console table tutorial and I thought…I could do that.  I made my table in different dimensions than the one in the original post to better fit in our space.  This was a surprisingly easy project that took just a weekend to complete (mostly downtime, waiting for things to dry.)

Lighting has to be one of my biggest stumbling blocks when it comes to decor.  I searched every site and every store I could think time and again looking for a lamp that would fit in this space.  Nothing seemed quite right, and those that looked right were too big!  And then I remembered – Pottery Barn Teen.  Maybe since I don’t have teenagers yet, I never seem to think of this site, but they have some great stuff! As soon as I saw this lamp I knew it was the one.  The base can be lit with or without the actual lamp part lit, and it gives off such a pretty glow!  I love love love it.  And the shade was on super sale – score!  I also could not pass up this adorable print (mine is 8″ x 10″) with such true words from Julia Child.  It is right at home in our kitchen.  The frame is from Target. 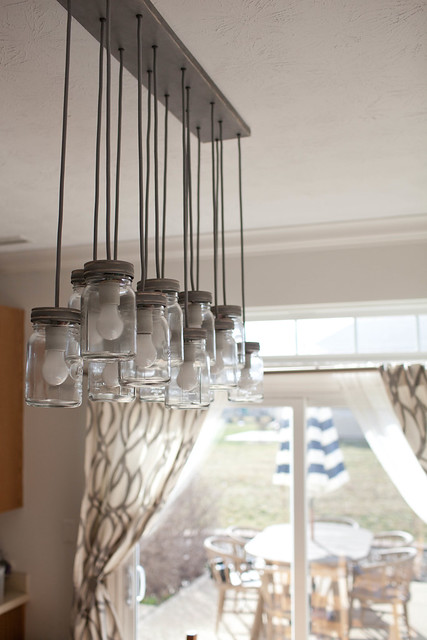 The old pendant light that hung over our dining table was one of my least favorite things about the kitchen.  Before we even moved in I said, ‘That has to go ASAP.”  And then it stayed for over two years.  I had had my eye on this mason jar chandelier from Pottery Barn forever but I was very skeptical about how it would look in our kitchen.  Then I saw it in person at Bobbi’s house (we are decor twins in soooo many ways), and I decided to go for it.  A coupon code and some rewards dollars also helped me take the leap.  Although it was a bear to install (thanks Ben!), we are so glad we decided on this light.  We love it!  Though, I always have to laugh when friends come over and ask if I made it.  Ha!  I am quite certain I would cut myself and probably shock myself trying to create any kind of light fixture. 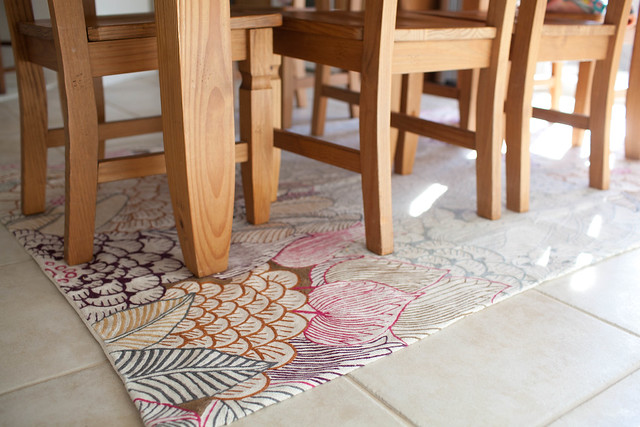 The former rug under the dining table was a plain boring neutral bought solely out of necessity when we moved in.  I wanted something with color, but still light and not overpowering.  After searching high and low, I found this rug from Anthropologie.  I wasn’t quite sure if I would like it in person but once I saw it, it was just the thing. 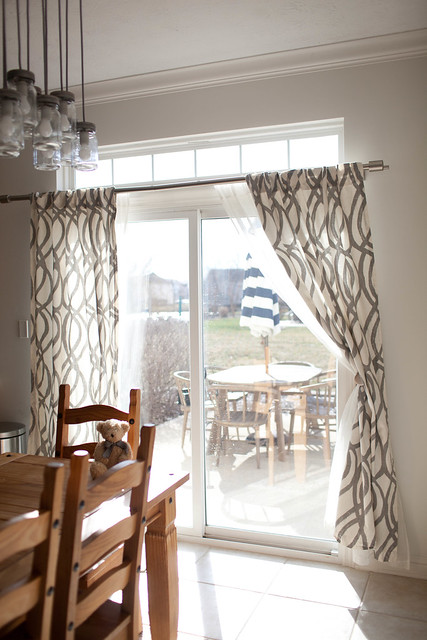 We previously had vertical blinds in the kitchen which annoyed me for a few reasons.  They made lots of noise when brushed against, the kids loved to play in them, pull on them, break them, etc., and they just reminded me of living in a college apartment.  I ordered these sheers and curtains and a new curtain rod from west elm.  I had to wait months because they were on back order, but worth it!  I really like the modern pattern.  (Teddy bear photo bomb!) 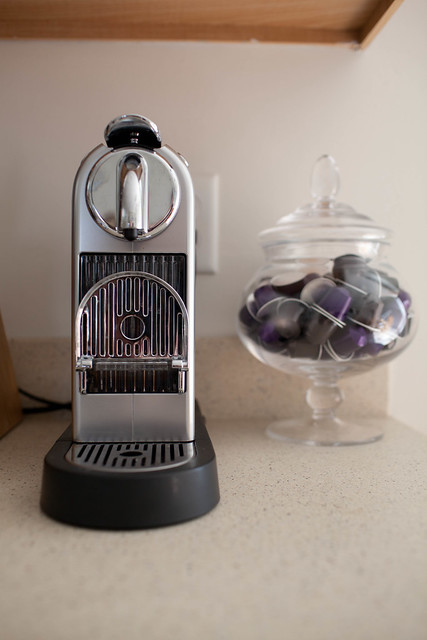 And while this isn’t exactly part of the makeover, this Nespresso maker has been a nice addition to the kitchen.  I like this covered jar from Crate & Barrel for storing the capsules.  (It seems they no longer carry it, but I’ve seen similar things at Target.)

Though it was a slow moving project, it has been awesome to see the kitchen transform into a space that is so much more our style.  Now I’ve moved on to our playroom, which should be finished soon!