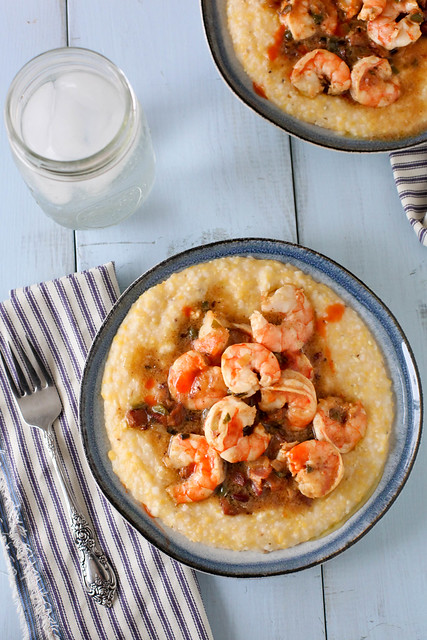 Growing up in Indiana, grits were something I ate exactly zero times before the age of 18.  25-ish, actually.  The first time I ever tried grits, I made the mistake of using a recipe online that called for instant grits.  That seemed convenient in theory, since it was the only type of grits my grocery store carried, but one bite was all I needed to learn that they had no texture and were suspiciously similar to cream of wheat (something I have detested since I was a child).  I backed off for a while, figuring grits were just not my thing.  However, I finally had an opportunity to try real, honest to goodness shrimp and grits in Charleston.  Those grits were fab and I realized quickly, the texture of stone ground grits made all the difference.  And then I experienced (to me) the best shrimp and grits yet while visiting Richmond.  They were extra spicy and made even more awesome with the addition of poached eggs on top.  AYKM?!

Anyway, it may have taken me twenty-some years to fully appreciate the greatness of shrimp and grits, but I’m all caught up now.  Good quality grits are key!  Ben was previously uninitiated, but one time was all he needed and he was sold.  In fact, I believe he said something like, “Why haven’t we been eating this every day?”