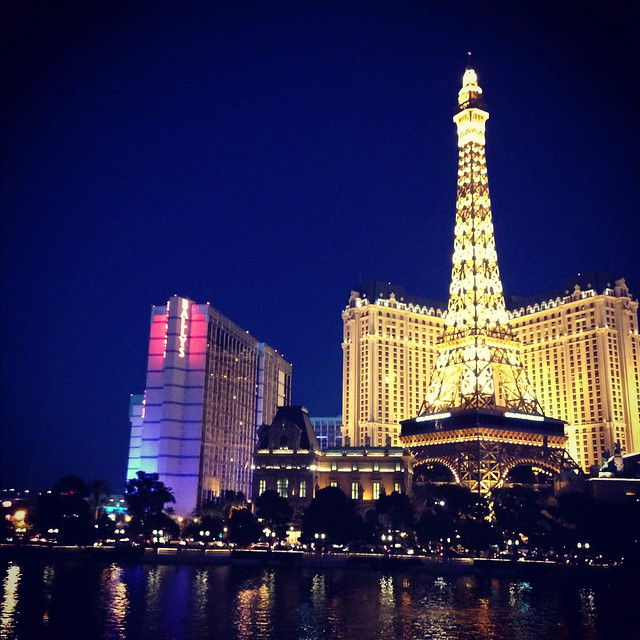 Well, this post is a bit late but better late than never, I suppose.  At the beginning of November, I traveled to Las Vegas to present a poster at a medical conference.  Ben was able to take a couple of days off from work and come along with me, so we turned it into a mini vacation.  Now, let me say up front that Vegas is someplace I never thought I would visit.  Though I like to have a good time, I’m not a huge party girl and I have exactly zero interest in gambling, even though this is the place I could learn more about ultimate texas holdem than anywhere else in America.  I figured that this trip would be spent mostly in my conference with the remainder of the time spent sleeping in the blessed kid-free quiet of our hotel room.  However, a few of my coworkers who had been there before reminded me that though a lot of typical Vegas is not my scene, there is one thing there that I do love: food.  Yes!  I started researching, including asking for recommendations from all of you on my Facebook page, and suddenly I was overwhelmed trying to narrow down the massive number of offerings into a select few for our brief trip.  I didn’t take my real camera, but here’s a glimpse of our trip through my iPhone.

Before I get into all the food, a note about our hotel.  After a lot of research (I am a major travel over-researcher), we ended up staying at Vdara in City Center.  I chose Vdara primarily based on the fact that it is a non-gaming hotel, but is still an easy walk from pretty much everything we wanted to see and do on the strip.  I’m picky about hotels but thankfully Vdara was the perfect place for us in Vegas.  The room was very nice, the service was always friendly and attentive, and the hotel overall was extremely pleasant.  Of all the details we loved about Vdara, our absolute favorite was that everything smelled amazing.  They pipe in some sort of refreshing, spa-like fragrance that was such a welcome change every time we entered the building after walking through smoky parts of other hotels.

Our first night there, we checked in to the hotel, relaxed for a few minutes, and then headed out to meet up with some of our friends for dinner.  Based on the recommendations of so many of my readers from Facebook, we chose to dine at The Tao.  The dramatic entryway was gorgeous, and really set the tone for the elegant but hip restaurant inside.  We all enjoyed our meal and the nice atmosphere there.  I had the Tao Tini as my beverage.  Then we split a Kobe beef spring roll for an appetizer.  I went with sushi for dinner and chose the lobster roll and spicy tuna roll.  The sushi was good, but not anything ground-breaking, and I’m pretty sure it gave me a mild case of food poisoning so…kind of a mixed review overall.  I’d definitely eat there again but next time I would probably try one of the actual entrees rather than sushi. 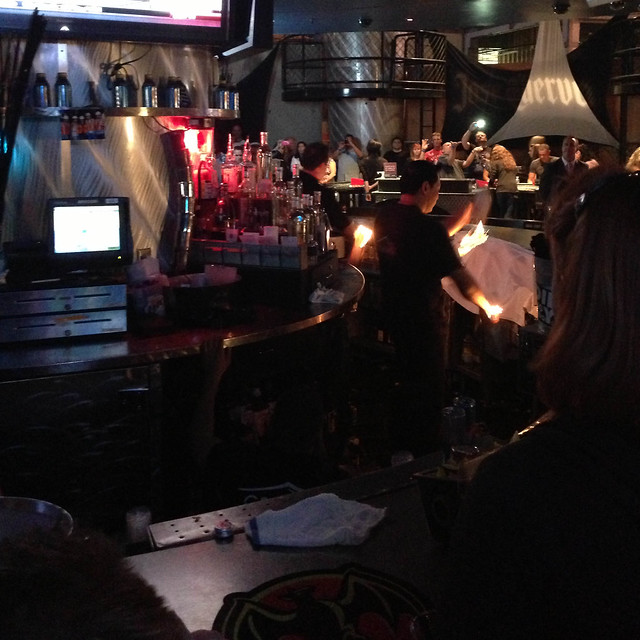 After that, we walked back down the strip with our friends and we all decided to stop at the Carnaval Court Bar for drinks and dancing.  None of us were really interested in the more legit(?) club scene of Vegas, so this was the perfect place for us to just hang out and have fun.  They had a really fun cover band playing and we danced for hours.  They also had several insanely talented bartenders doing crazy things like juggling bottles on fire, balancing some huge number of bottles on their heads, and all sorts of other amazing feats.  It was great entertainment! 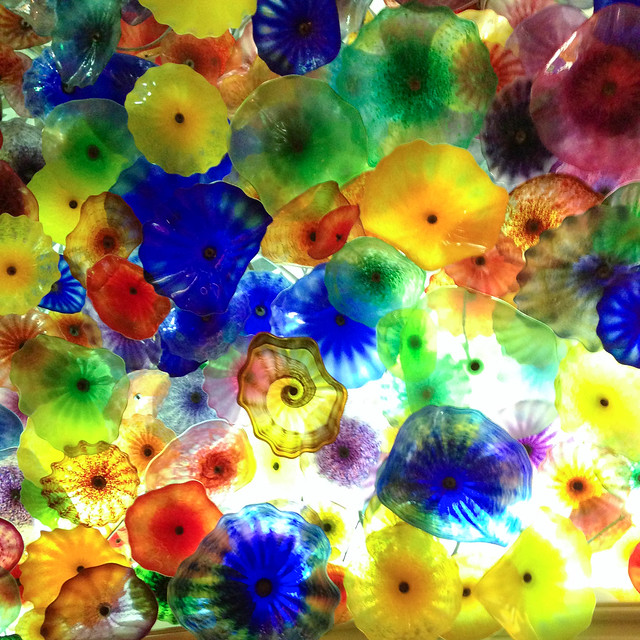 The dancing and the time difference finally got the better of me, so we headed back to our hotel.  But, since we walked through Bellagio to get to Vdara, we couldn’t resist stopping at Jean Philippe Patisserie for some gelato.  This place was pretty flippin’ fantastic and as you’ll see, we took full advantage of our numerous walks past it.  That night I tried the tiramisu gelato.  Divine. 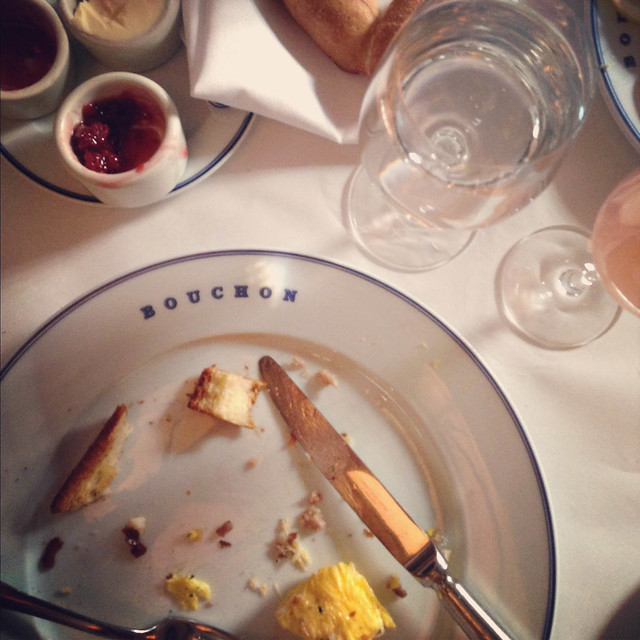 Now let me just say that of all the places we planned to dine at in Vegas, I was most excited to eat at Bouchon.  I’m sure it is wonderful for dinner as well but since so many readers recommended it for brunch, we headed there first thing in the morning.  What followed is rather hard to describe, other than saying that everything about the meal was utterly perfect.  That day I enjoyed the crab cake omelette with a peach bellini.  Ben had biscuits and gravy benedict – insane!  Of all that wonderful food though, my favorite part was the incredible French bread and sour cherry jam.  I could eat that every day forever, really.  And so, I fell in love with Bouchon and that sealed the deal – we ended up eating there every single day for breakfast.  Why bother going anywhere else? 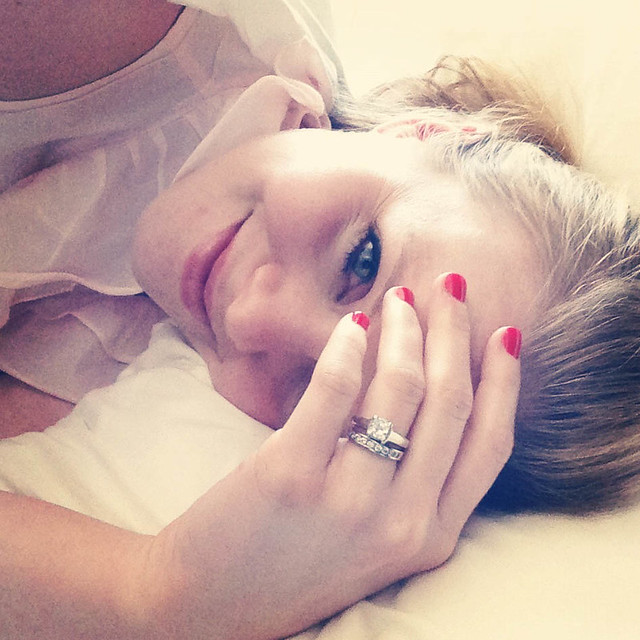 We were up a bit early because our time zones were still a little out of sync, so I had just enough time for a manicure at the Vdara Spa before I had to be at the conference.  Since it was fall, they had a special going on with a pumpkin spice manicure.  It involved a pumpkin spice mud masque and caramel milk lotion, so yes, it was awesome.  I took a brief cat nap afterward and as you can see, the luxury of a manicure + nap is not one this momma gets often.  I was just so, so happy to have a moment to rest. 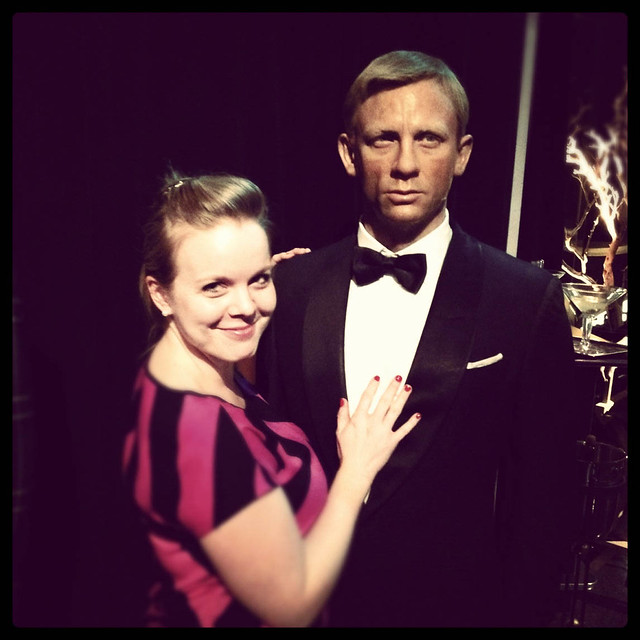 That afternoon we had a small break in the conference, and a bunch of us decided to pop over to Madame Tussaud’s wax museum.  I’ve seen pictures from Madame Tussaud’s many locations for years and have always wanted to go.  It was a really fun way to spend 20-30 minutes.  Most of the wax statues were incredibly realistic, and they had a wide variety of figures – movie stars, musicians, sports stars, historical figures, and movie characters.  Daniel Craig/007 was my favorite ;) 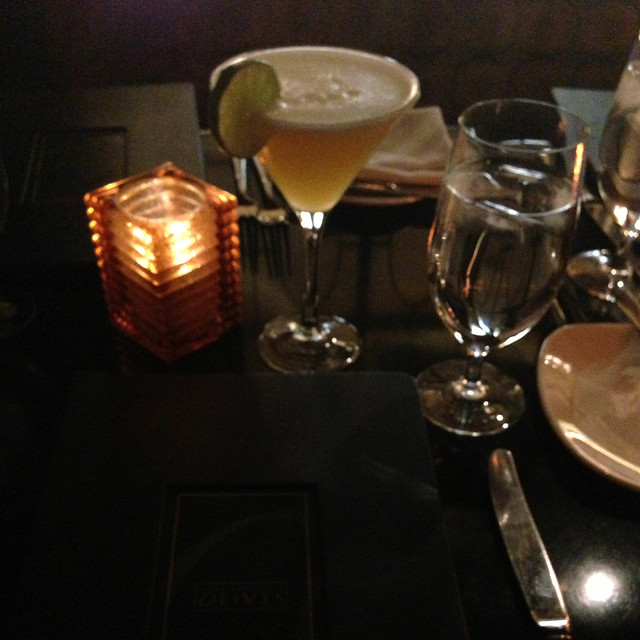 I’ll spare you the details of the conference itself and skip right ahead to dinner that evening.  Another great reader recommendation, we tried Olives at Bellagio.  Based on their menu I figured it would be good, but it far surpassed my expectations.  In fact, this was my favorite dinner of the entire trip.  All I have to remember it is this blurry pic of my cocktail but that’s okay because I took notes.  Speaking of the cocktail, it was stellar – a passion fruit sling back.  I need to find out how to recreate it because really, I loved it!  We all shared a shrimp chorizo flatbread with garlic crema as a starter.  For my entree I had the veal fontina fazzoletti which was some sort of comfort food bliss.  I’m at a total loss for how to do it justice with words! 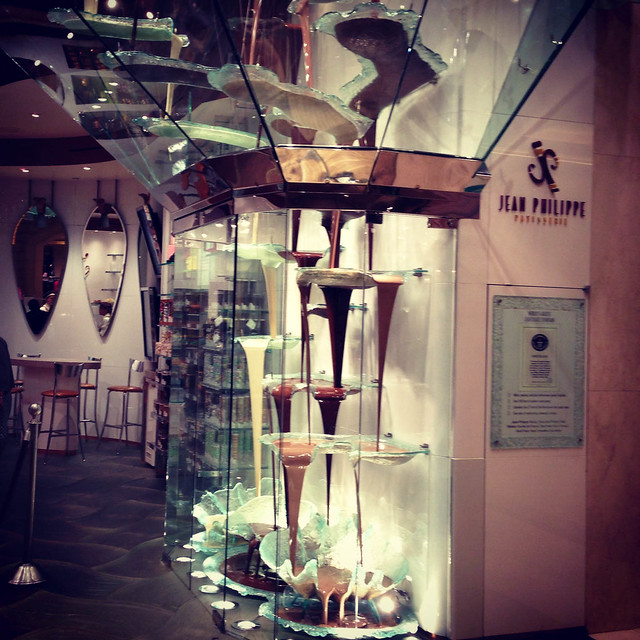 After dinner we went to a Cirque de Soleil show which was…just not my thing.  It started out really strong and then got kind of weird and boring.  I’m sure there are some great ones there but I just was not a fan of the one we saw.  But, afterward we made our way back to Jean Philippe for gelato – this time pistachio.  Oh, did I mention their awesome chocolate fountain?  It was kind of mesmerizing. 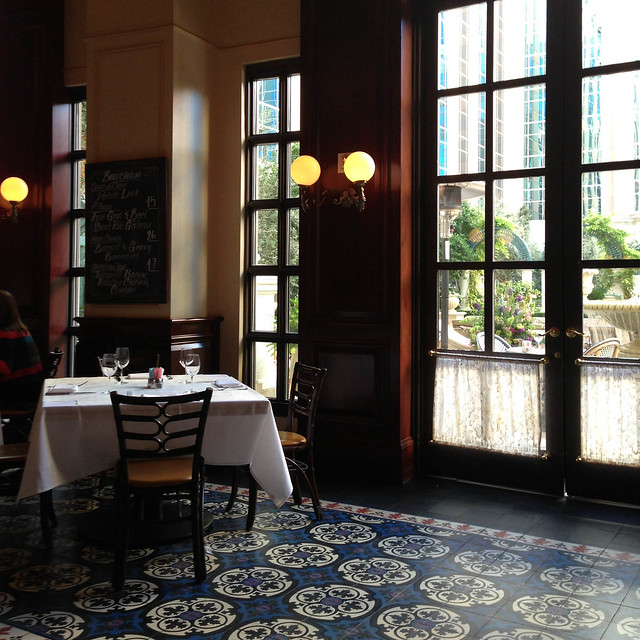 The next morning was Bouchon again before I had to be at the conference.  That day I tried the chicken and waffles.  Oh yeah, Thomas Keller has a version of chicken and waffles.  Even better than you could ever imagine.  It was accompanied by a mimosa and more of the incredible bread and jam.  Oh, that jam.

I spent the morning in the conference and then a group of us went to lunch with our attendings and a few other conference attendees.  The job of choosing a restaurant for lunch was sprung on me at the last moment, and lunch options were one thing I had not researched very much.  After flipping through Yelp and Urbanspoon we went to Milos, a Greek restaurant at The Cosmopolitan.  The food was really great and they had a lot of nice lighter lunch options, which was a welcome change after so much indulgence!  I had the meze platter as a starter, and the shrimp with tomato feta sauce with couscous for my lunch.  Loved it all!

That evening we dined at one of the most reader-recommended restaurants, Mon Ami Gabi at the bottom of the Eiffel Tower.  We came early in hopes of getting outside seating so we could watch the Bellagio fountains, but eventually we accumulated enough of a party that they didn’t have a table large enough to seat us outside.  No matter though, we sat inside and had a grand time.  I tried the Paris Romance cocktail and Ben and I split a cheese trio starter.  For my entree I had the lobster tartine, which I loved and was another nice, lighter meal after so many heavy ones. 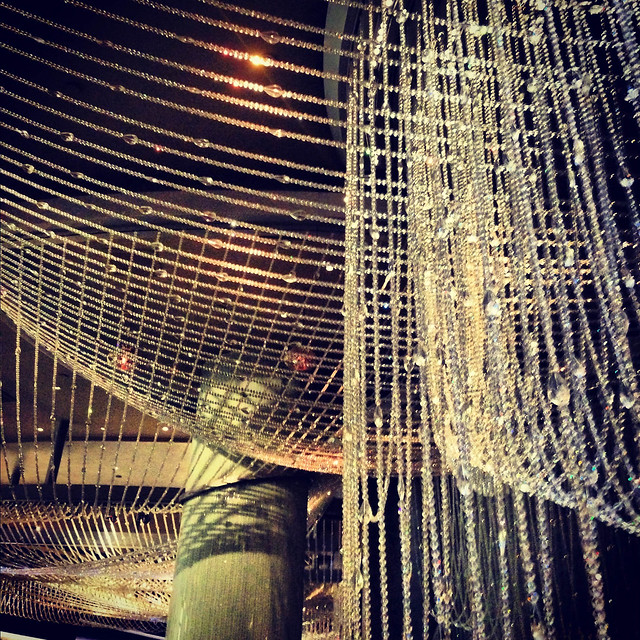 Much later that night, we met up with a few former colleagues who were also attending the conference and went to a bar in Cosmopolitan.  Man, I just have to say – that hotel is a sight to behold.  These strands of crystals were draped aaaalllllllll over the ceilings, pretty much everywhere.  It was very glam and chic.  I don’t remember what cocktail I tried there.  It must have been decent but not memorable in any way.  Of course by that point, I was barely holding my eyes open after such a jam-packed trip.  I was tired and ready to see my babies. 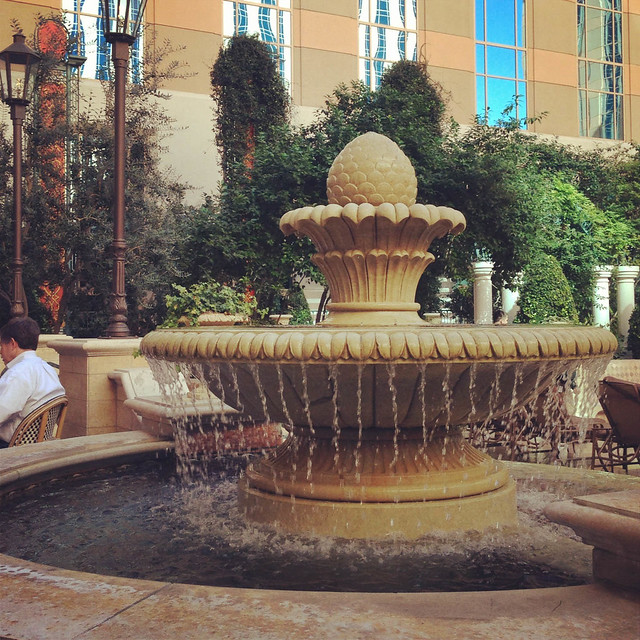 The last morning, I attended my final session of the conference and we headed over for a last meal at Bouchon.  That day was a Monday and much to my dismay, the sour cherry jam is only a weekend offering.  The mango jam they gave instead was lovely, but still, no sour cherry jam.  This was more around lunchtime so I had the moules frites.  Awesome, as expected. 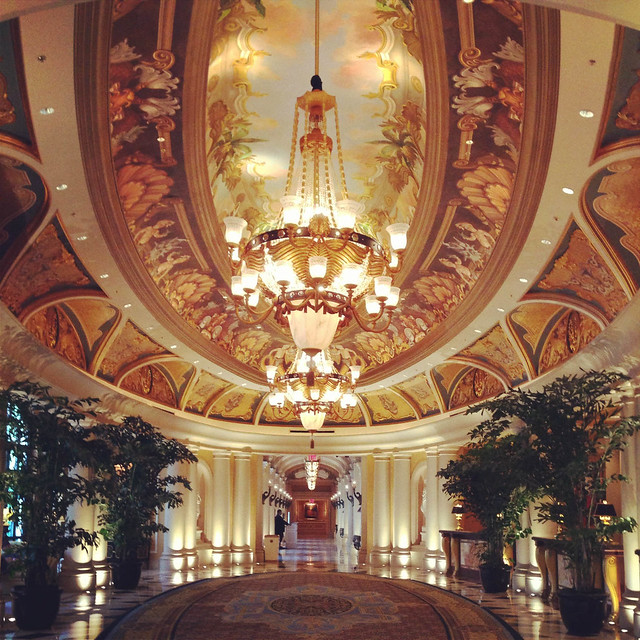 By the way, Bouchon is located in The Venetian which is a gorgeous place to behold.  So striking! 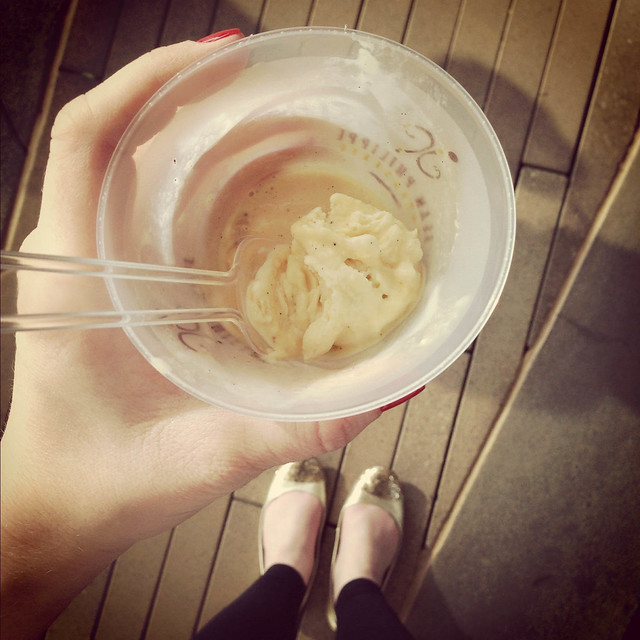 We had a final hour to kill before our shuttle picked us up for the airport so of course, it meant one last gelato.  This one was creme brûlée, and it was definitely my favorite flavor that we tried.

So overall, Vegas was way more fun than Ben and I expected it to be!  Though much of what goes on there is not our thing, we still found plenty of fun things to do and lots of great food to enjoy.  I’m not sure I’ll go back unless I have a reason, but at least if I do, now we have lots of places we know we love and more we would like to try.

Disclaimer:  This is not a sponsored post of any kind, just me sharing the details of my trip with you in case they are of use in your own future travel plans.  I have no affiliation with any of these businesses, and am writing about them just because I want to :)