How to Make Macarons – Step by Step 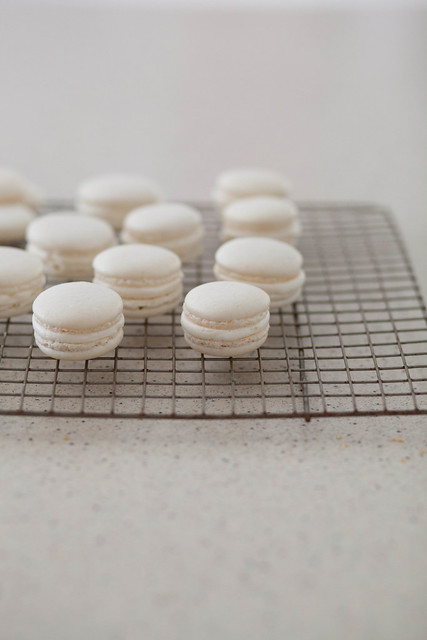 French macarons are a small cookie with a big reputation.  A reputation for being beautiful and delectable, and also a reputation for being incredibly temperamental and finicky to make.   The first time I made them, and many times after that, I wasn’t sure what all the fear was for.  They had always turned out fine.  But then suddenly, they didn’t.  Sometimes they worked out but sometimes not so much.  I tried various techniques to troubleshoot these issues with varying success but overall, I was frustrated.  I was ready to try something new.  And suddenly, in absolute perfect timing, my copy of Bouchon Bakery by Thomas Keller arrived and it held the key to fixing my macaron frustrations.

The general method I had relied upon before is known as the French method, where the dry ingredients are folded into a meringue.  The method described here is known as the Italian method, and involves incorporating a sugar syrup into the egg whites while they are being whipped (i.e. an Italian meringue), which is then incorporated into the dry ingredient mixture.  Having now experimented with both methods repeatedly, I find I prefer this method for numerous reasons.  First and foremost, I get the results I want consistently.  I prefer the taste, texture, and appearance of these to any I have made before.  Second, the recipe allows some flexibility so to ensure the batter is the appropriate texture for piping.  And third, I find this more convenient in multiple ways.  There is no need to age the egg whites (YAY!), wait and let the shells rest before baking, or to let them sit for ages before oh-so-carefully removing them from the baking sheets.  Pipe, bake, cool briefly, and move to a cooling rack.  Repeat as needed.

So, after making literally hundreds of these with great results, I decided they were ready to be shared with you all.  Hopefully you will enjoy this recipe just as much as I do!  Here I’ll walk you through the general technique and the exact recipe to include measurements is below.  Let’s make macarons! 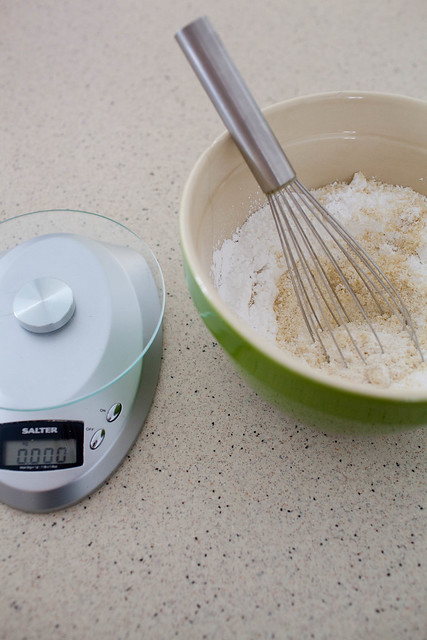 First, preheat the oven to 350˚ F and place a rack in the middle of the oven.  Line baking sheets with parchment paper.  In a large bowl, combine the almond meal and confectioners’ sugar.  Whisk together to blend and break up any clumps.  (You can also use an equal weight of blanched or slivered almonds and grind them in a food processor, but I much prefer the convenience of almond meal, not to mention I think it ultimately results in a better texture.  If your almond meal is coarse or looks clumpy, you may want to run it through the food processor to grind it a bit more, to ensure a nice smooth top to those pretty cookies.) 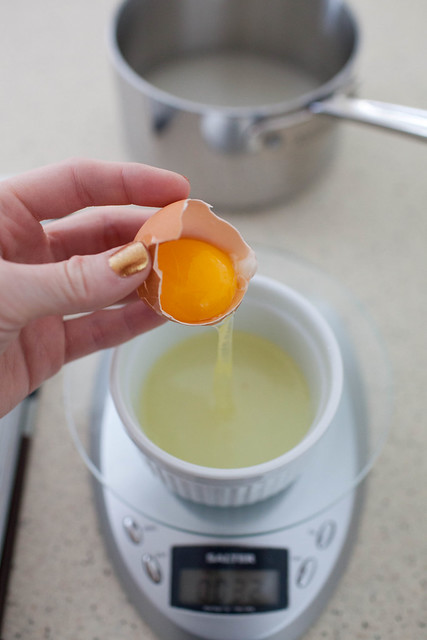 Next you’ll weigh out a portion of egg whites to fold into the dry ingredients.  One large egg white weighs approximately 30 grams – just a useful little kitchen tip that comes in handy from time to time. 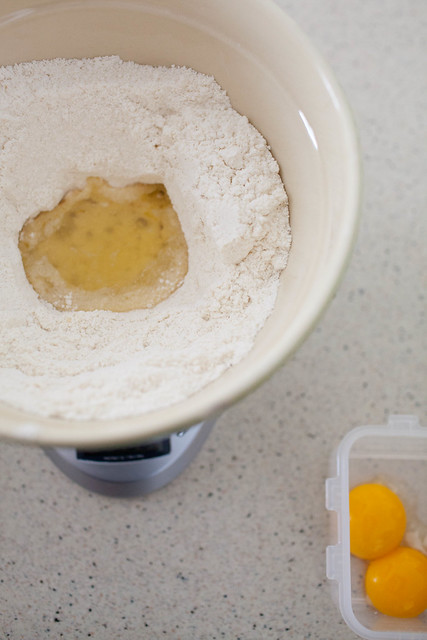 Make a well in the center of the dry ingredients and pour in the egg whites. 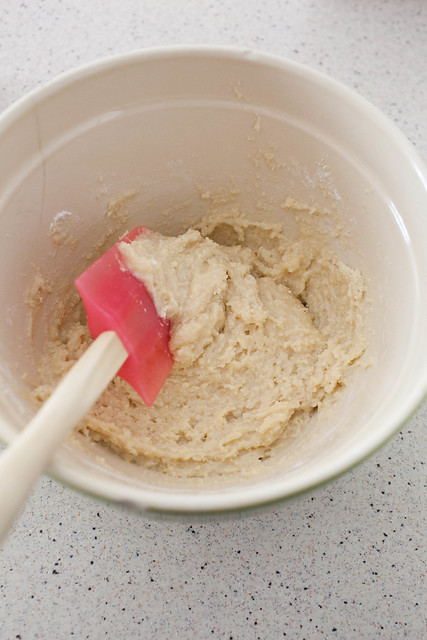 Blend the egg whites into the dry ingredients until evenly mixed.  The mixture will be thick and paste-like. 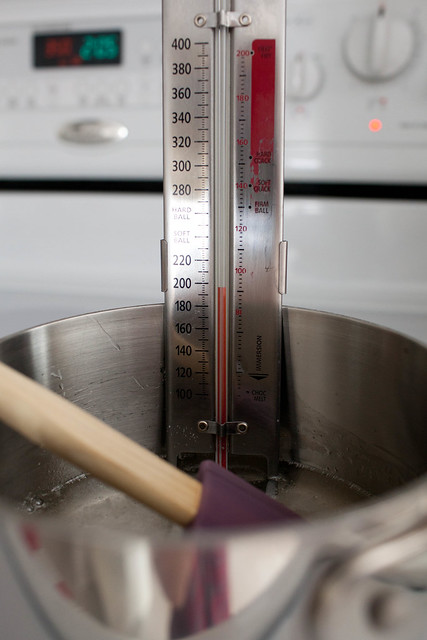 Meanwhile, combine the sugar and water for the syrup in a small saucepan over medium-high heat with a candy thermometer clipped to the side.  When the temperature is around 200˚ F, begin whipping the egg whites. 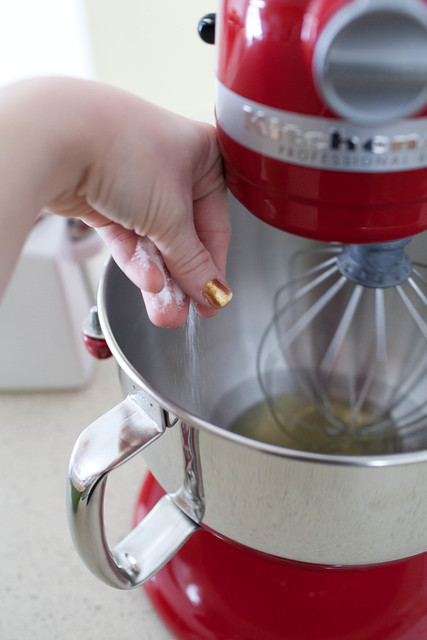 In the bowl of a stand mixer, begin whipping the second portion of egg whites on medium-low speed.  Add a pinch of sugar to the bowl. 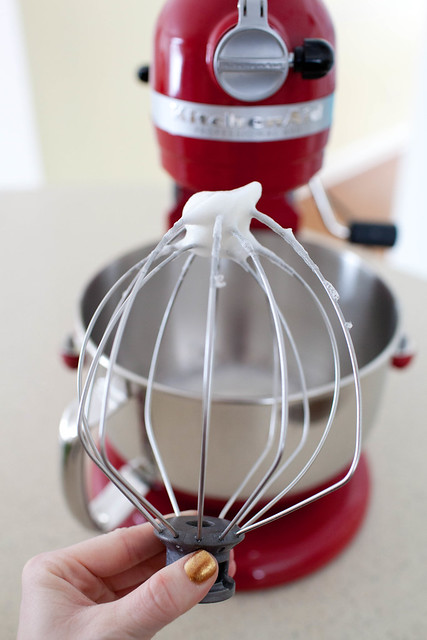 Continue whipping the whites on medium speed until they form soft peaks.  If soft peaks are achieved before the syrup reaches the target temperature, reduce the speed to low to keep the whites moving. 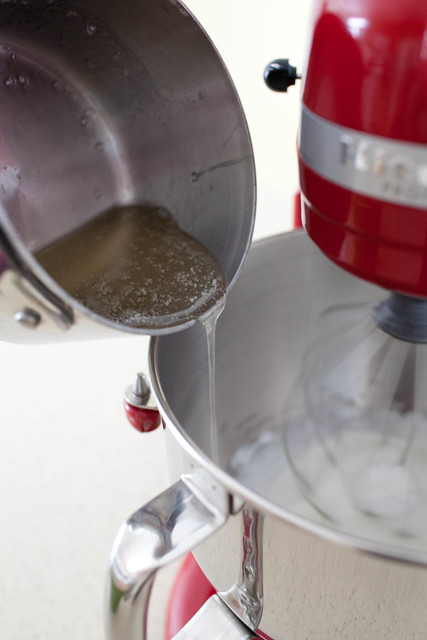 Once the syrup reaches 248˚ F, immediately remove it from the heat.  Increase the mixer speed to medium and pour the syrup down the side of the bowl in a slow drizzle until fully incorporated. 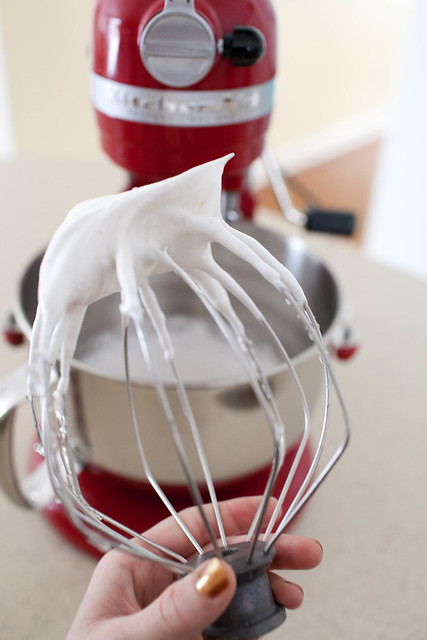 Increase the mixer speed to medium-high and whip the meringue until stiff, glossy peaks form.  If you are going to add color to the macaron shells, this is the time to do so.  Gel or powdered food colors should be used.  The Bouchon book recommends Chef Master Liqua-Gel colors, and now that I have tried them I whole-heartedly agree.  I have tried so, so many brands of powders and gels for coloring macarons and these win by a landslide.  Just remember that whatever color your meringue mixture is, it will lighten a bit when mixed with the almond mixture, so keep that in mind depending on the end result you are hoping for. 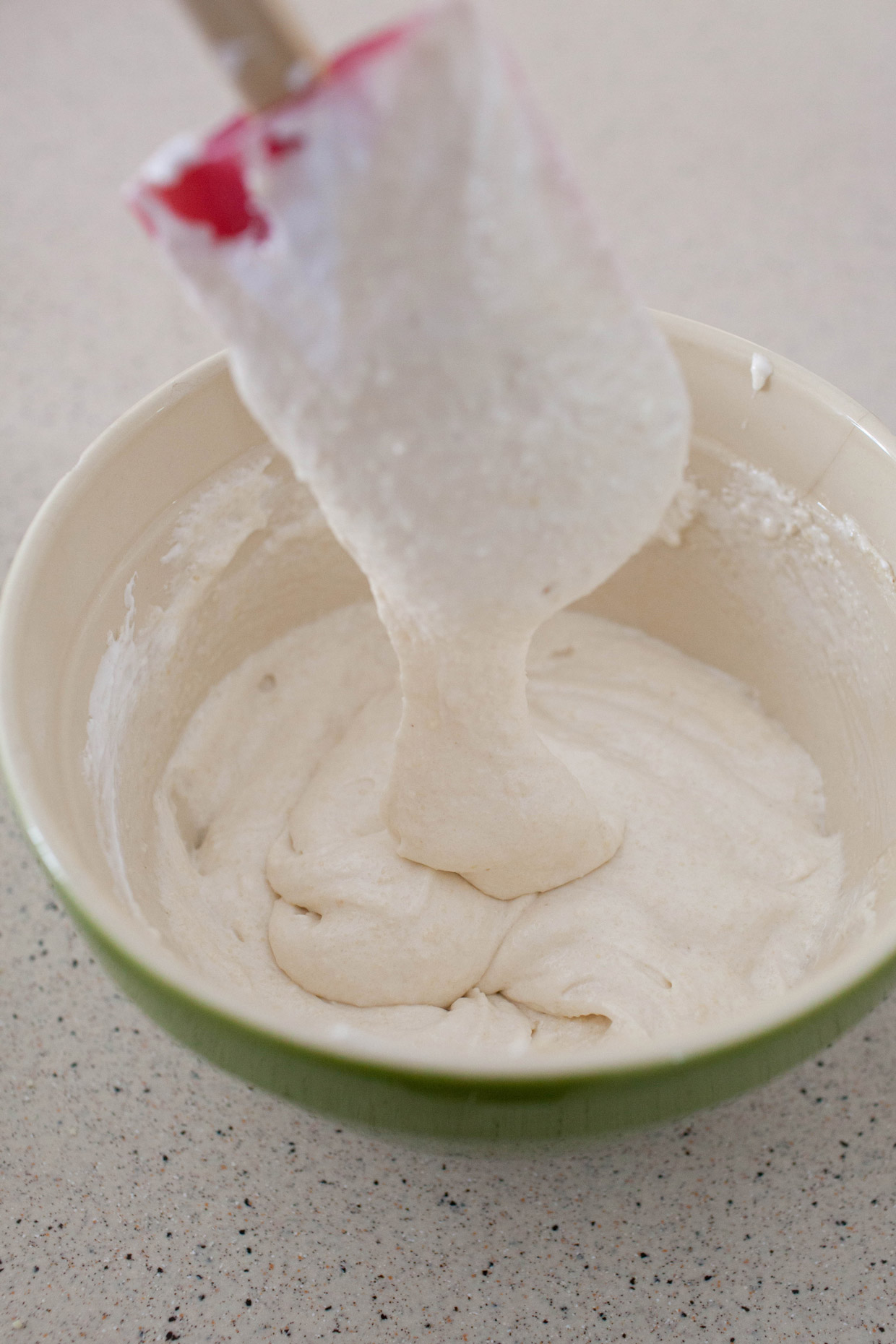 Add one third of the meringue mixture to the bowl with the almond mixture.  Fold in gently until the mixture is smooth.  A bit at a time, gently fold in the remaining meringue until the batter is smooth and runs in thick ribbons off of the spatula.  You may not need all of the meringue, so add it gradually.  (I typically use most but not all of it.) 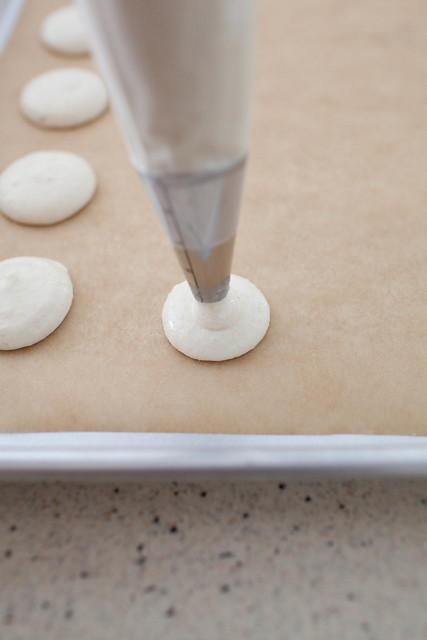 Add the batter to a pastry bag fitted with a plain round tip with about a ½-inch opening.  Hold the bag perpendicular to the baking sheet about ½-inch above the surface of the pan.  Steadily pipe rounds about 1¼- to 1½-inches in diameter. 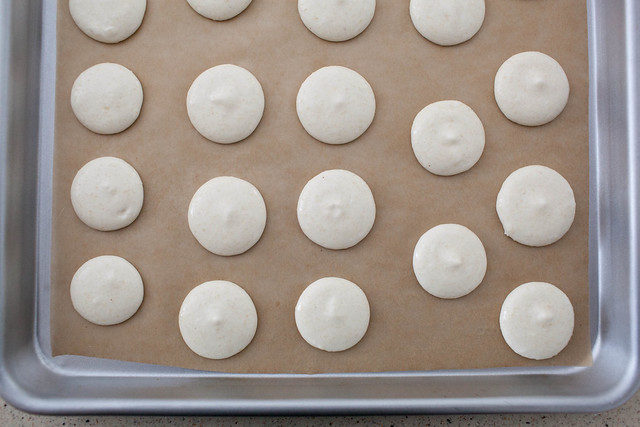 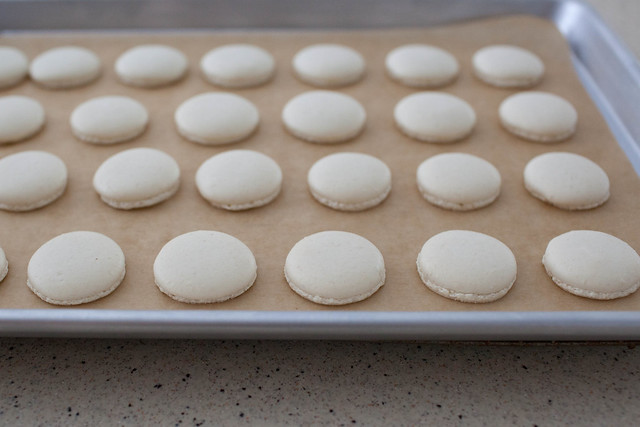 Transfer the baking sheet to the oven and immediately reduce the temperature to 325˚ F.  Bake for 9-12 minutes, until the tops are smooth and set and “feet” have formed around the bottom. 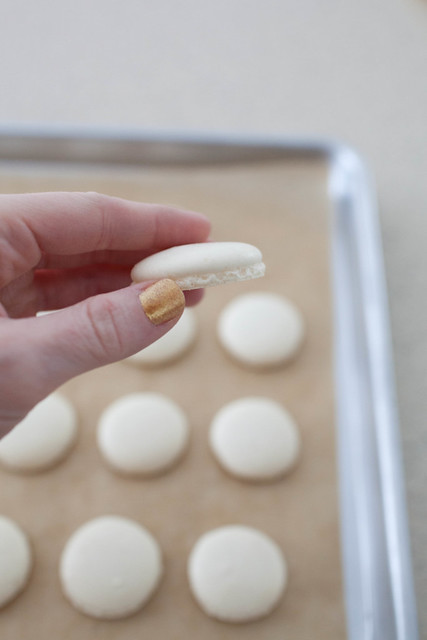 Let the shells cool just briefly on the baking sheet, maybe 5 minutes or so, and then peel away from the parchment.  They should come away easily and fully intact.  Transfer to a cooling rack.  Repeat as needed with the remaining batter, replacing the parchment paper with each batch.

Once the shells are baked and cooled, match them up in pairs by size and sandwich with the filling of your choice.  Ganache or Swiss meringue buttercream are my favorite options.  For the most part, the filling of the macaron is where the majority of the flavor play comes in because the shells should not be altered too much or they may not turn out quite right.

Buttercream or ganache, for filling