Visiting Connecticut: A Weekend with My Girls 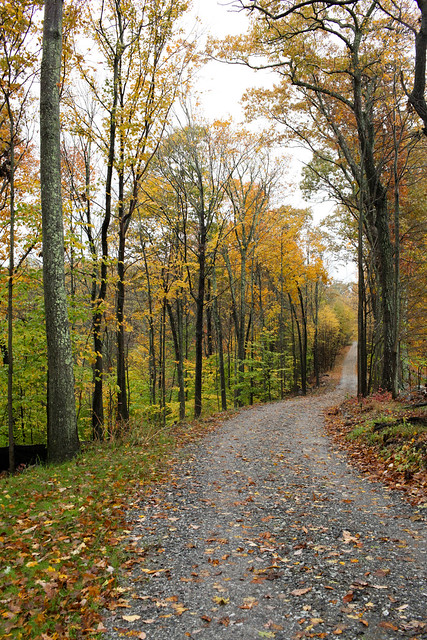 Oh, where to begin?  October is my favorite month of the year, but this year it was made way more fun than usual because I took a trip to enjoy an extended girls’ weekend with four of my best friends.  If you’ve been reading my blog for any length of time, you’ve definitely heard about them before.  We met years ago through our common love of food and blogging about it, and now after innumerable daily emails, texts, etc. they are truly some of the best friends I could ever ask for.  We last got together earlier this year in February to surprise Courtney with a baby shower and we had so.much.fun.  But the trip was over in the blink of an eye, not to mention we were missing Elly that time around so we decided we had to do it again, with the whole group and with a little extra time together.  This time Tara and her husband Kyle graciously hosted us in the beautiful new home they built this year.  Connecticut in the fall?  So gorgeous.  That’s her driveway up there! 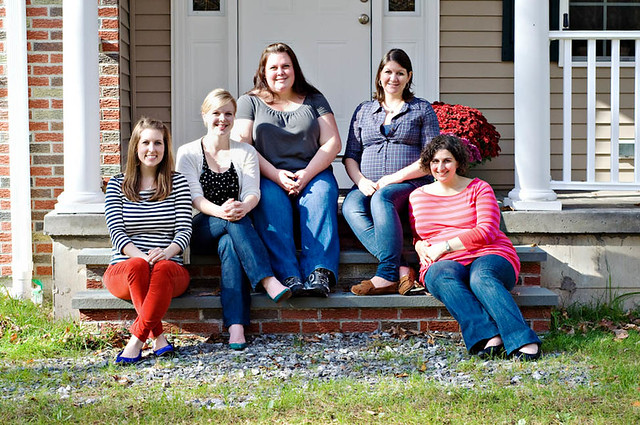 Josie and I met up in Atlanta and flew in together.  We all arrived late in the evening at the airport, but that didn’t stop us from picking up where we left off and getting right down to the usual silliness.  We stayed up late talking and laughing…pretty much the standard for the whole trip.  The next morning we collected ourselves and went out to breakfast at a little place near Tara’s house called Leo’s.  It was a cute place with a very homey feel and good breakfast food.  For me the highlight was the waffles with pumpkin cannoli cream which Tara insisted we all sample.  So awesome!  (As you will see, the trip was heavily centered around food.)  The bulk of the rest of that day was spent with more talking, giggling, and not much else.  My face hurt from smiling so much. 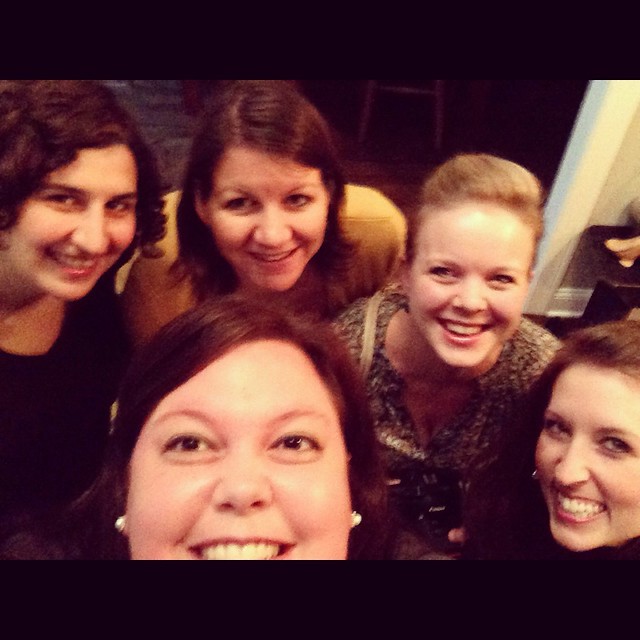 Later that evening we got ready to go out, and attempted to snap a group self-photo.  This was the best we could do.  I love it :)

Five foodies overcomplicate most decisions related to food, so naturally it took us quite a while to decide on where to eat dinner.  We finally decided on Taste in Croton-on-Hudson, and it did not disappoint.  The cheese board was fabulous and we really enjoyed the entire meal.  We wanted to stay for dessert but unfortunately we didn’t have time…

Because we needed to head over to the Hudson Valley Jack O’Lantern Blaze.  Guys, this was seriously amazing.  I have never seen any Halloween event that was this cool!  They have over 5,000 hand carved jack o’lanterns, most of which are built to compose various jaw-dropping scenes.  Every turn of the path led to some new incredible sight.  I am certain that I will be going back to this sometime in the future and bringing the kids.  I know they would absolutely love it. 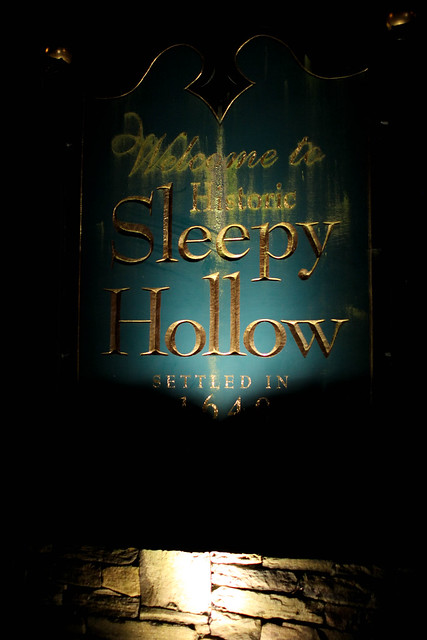 After we left, we were on a mission to find dessert.  Vacation with girlfriends is no time to be skipping dessert, after all!  After much Yelp/Urbanspoon/Google Map-ing, we were en route to our sweet treats when we headed into Sleepy Hollow.  The real Sleepy Hollow!  We were beyond excited and had to stop the car to snap a quick photo.  Andrew is obsessed with the tale of Ichabod Crane and the Headless Horseman, so I knew he would be excited about this and oh, was he ever! 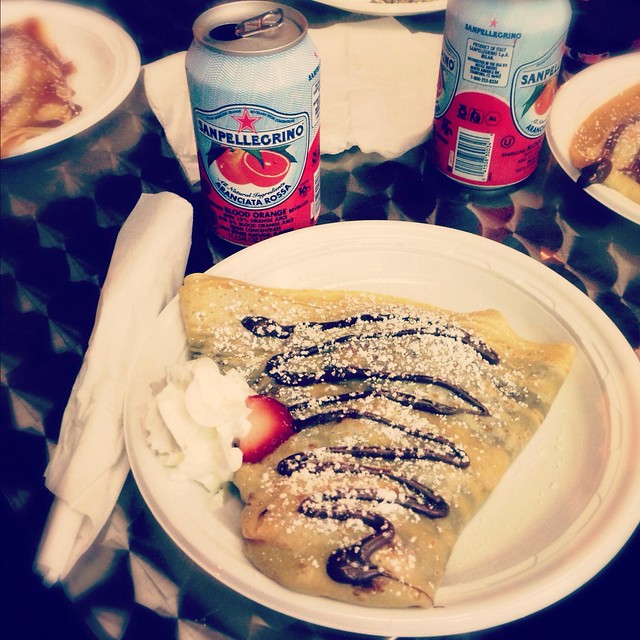 After our brief distraction, we made our way to what was basically the only dessert place we could find open at that time of night, Yogurt Le Crepe.  A frozen yogurt + crepe joint.  So incredibly delicious.  Why don’t we have this in Indiana?  I chose a strawberry Nutella crepe and it was unbelievable.  Ugh, just thinking about it makes me want to go back right now!  After we finally returned home it was the usual – stay up late, laughing hysterically. 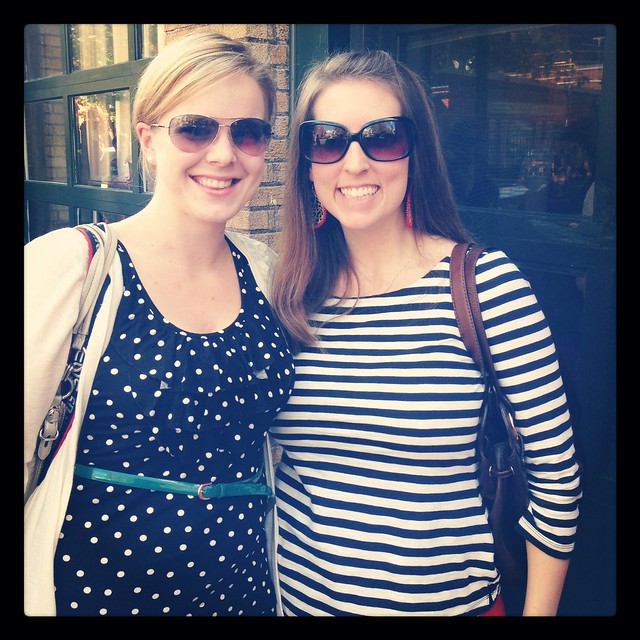 The next morning despite being quite exhausted, we rallied because we had someplace important to be – Cupcake Camp New Haven. 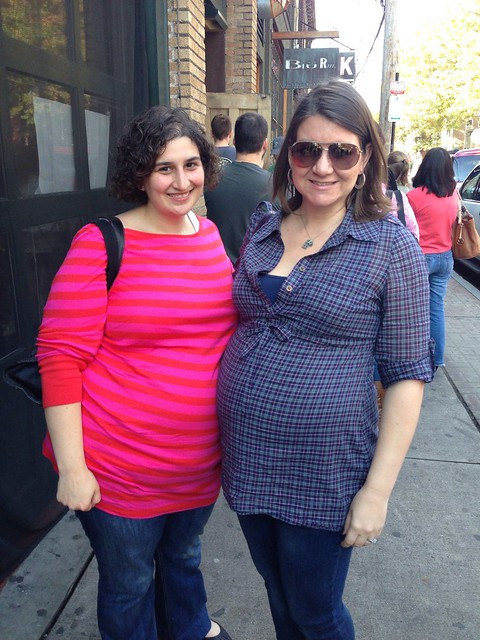 Hey!  There are five people in this picture!  Cute mommas. 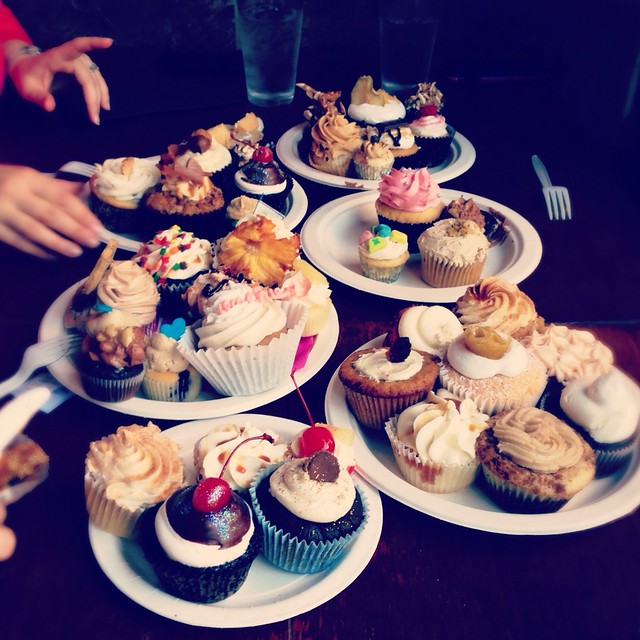 So yeah, Cupcake Camp – this was a pretty amazing event.  Basically tons of local bakeries, bakers, bloggers, etc. brought cupcakes galore and we were able to sample as many as we wanted – for free!  The place was positively packed with people and it was difficult to make much progress through the rooms to see all the offerings.  We all grabbed plates, split off and started picking up everything that interested us.  Then we all met back up with this massive haul so we could do some tasting. 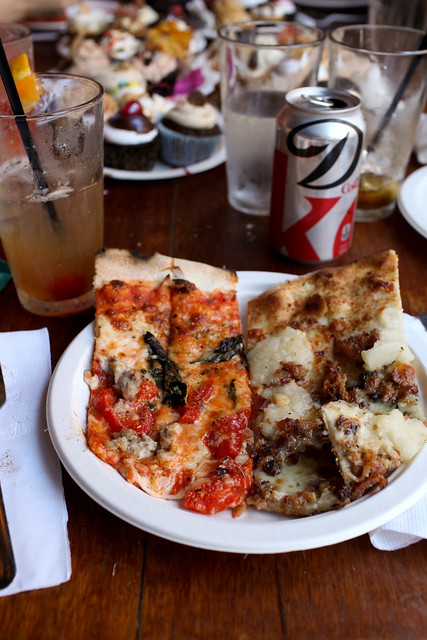 But first, we decided to have lunch at BAR, where the event was hosted.  Their pizzas were really amazing.  Tara recommended the garlic mashed potato pizza which – sounds kind of icky, right?  Wrong.  It was so, so good.  The super thin crust and the fluffy mashed potatoes were a perfect pair.  (However, the service was horrible.  The waitresses were incredibly snotty and inhospitable.)  Before our pizza arrived and afterward, we worked through a good number of the cupcakes.  Courtney careful cut each one up so we could all try a bite.  There was definitely a wide range of quality as far as the cupcakes were concerned.  Some were really great and some were not good at all.  We had a great time analyzing the different components and flavors, and picking our favorites.  We were obviously beyond stuffed, so we ended up saving at least half of them for cupcake tasting 2.0 later that evening. 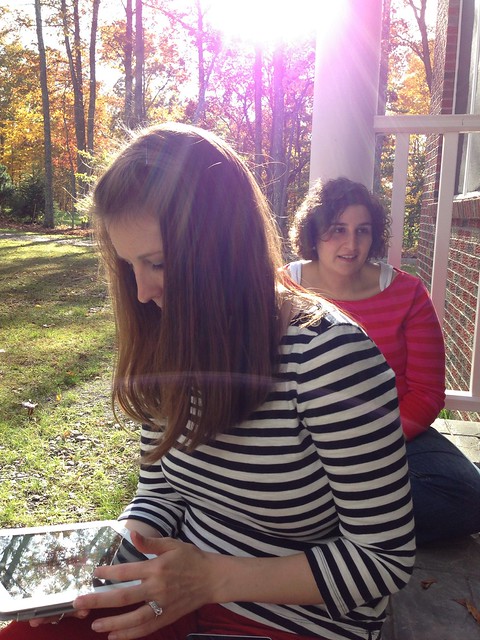 We came home again and enjoyed a gorgeous fall afternoon on the porch.  And later, as is only natural after eating such mass quantities of goodness, we started planning our dinner.  Without a doubt one of the best parts of our get togethers has been the time we spend in the kitchen cooking a meal together.  Since we enjoy the process so much and because there are so many hands available to help, we tend to go for slightly more involved recipes.  Choosing the perfect recipe takes us quite a while but I think this time we cut the deliberations down to under 90 minutes.  That’s progress, I suppose :) 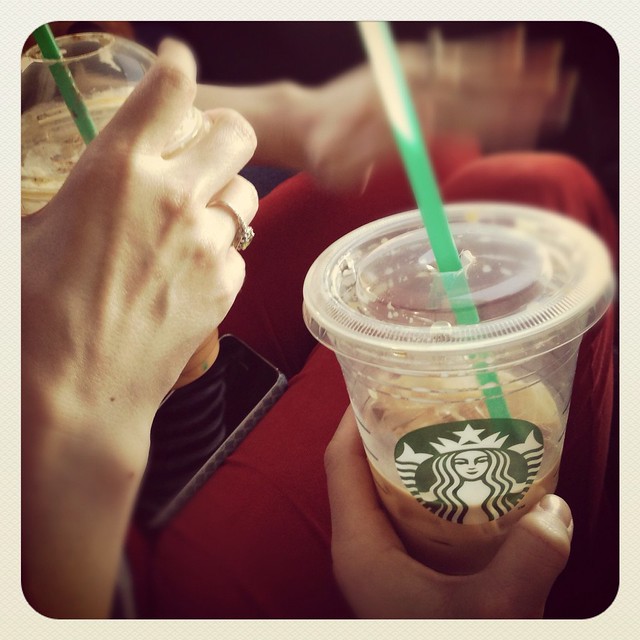 After our decisions were made, we headed out for a grocery trip to get our ingredients, and a quick coffee run. 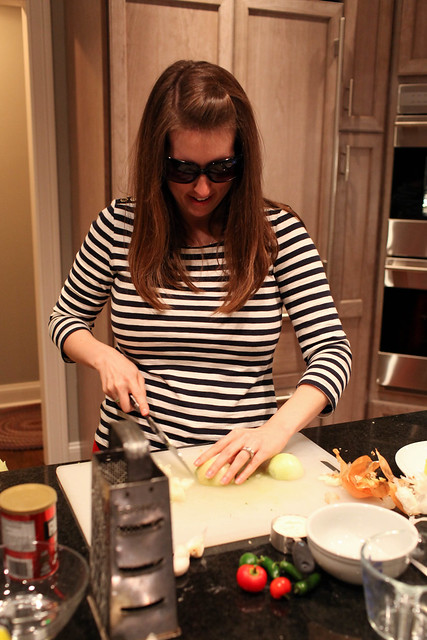 Then we came home and got to work!  This onion was being vicious so Courtney put on her game face and her makeshift onion goggles.  So funny.

Since we take our time and enjoy making dinner, we also needed snacks of course.

Since we were making enchiladas, we decided to go the extra mile and make homemade tortillas.  They really make such a difference in the final dish.  Plus, it’s fun! 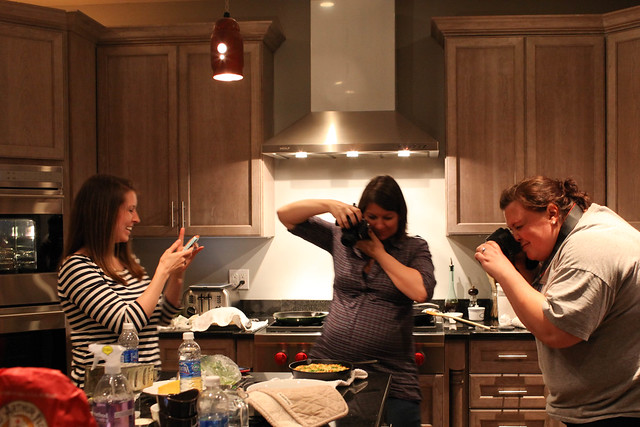 Food bloggers doing what we love :)   We finally sat down to eat our meal fairly late in the evening and it was stellar!  In fact, I just remade it this weekend so I can share it with you soon.  Recipe next week!  The rest of the night was spent staying up as late as we could, laughing hysterically.  Elly had us in tears!  We just didn’t want it to end but eventually sleep won us over.The next morning Elly, Josie and Courtney went back to the airport to head home, but I was able to stay an extra day with Tara.  We kept it very low key since we were pretty exhausted due to lack of sleep.  Of course, we couldn’t just do nothing, so we decided to bake something.  The rest of the night was lots of lazing around and petting Wilma, Tara and Kyle’s sweet cat. 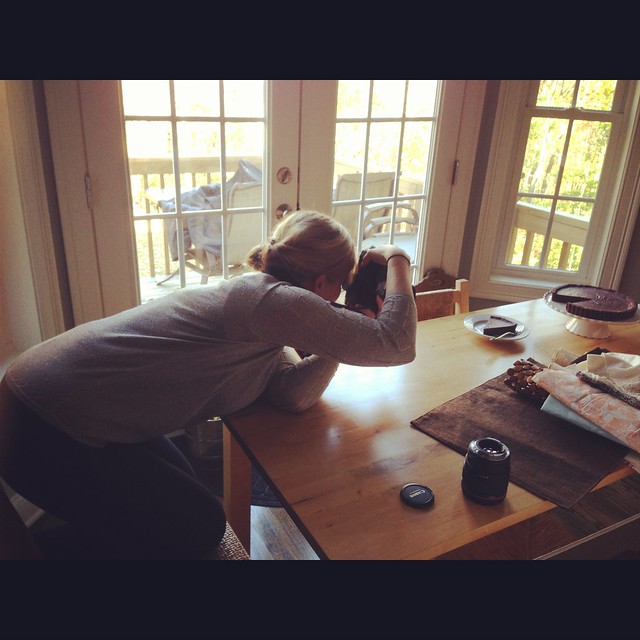 Right up until the last few minutes before we had to leave for the airport, we were doing what we love and taking pictures of food.  And then we got to eat it.   So very good.

It was certainly hard to say goodbye at the end of such an incredibly fun trip, but this time it seemed a bit easier knowing we’ll make this happen again, and soon.  These girls are so incredibly dear to me, I don’t even have the words to adequately express it.  They have been endlessly supportive during a very rough year for me, and provided much needed comic relief.  I feel so lucky to have them in my life and cannot wait until our next adventure.