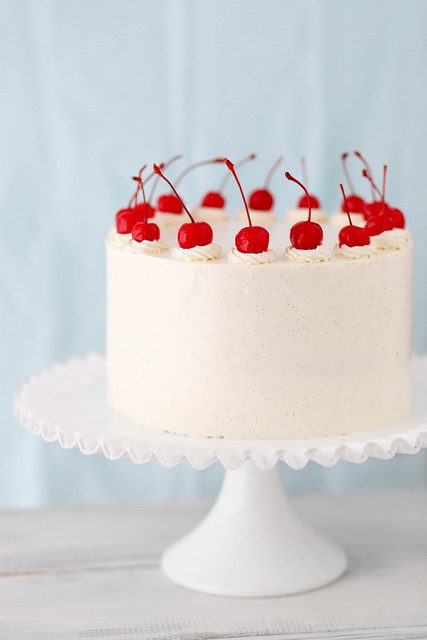 My totally awesome baby brother turned 24 last week.  Um, what?  How is that possible?  In my mind he still remains the sweet little “Stevie” who became hysterically upset when he saw a clown at my birthday party one year (I agree though, clowns are creepy), and who is the best sharer I have ever known (he’ll even give you the rest of his milkshake – for real!)  Sometimes it’s hard to reconcile my memories of that little guy with the young man now in his first year of teaching elementary school, and who also happens to be one of the two best uncles my kids could hope for.  Time is just flying.

Instead of dwelling on that fact, we celebrate!  We celebrate with family time together, which in part consisted of him pushing Andrew around the backyard on a riding mower that was not turned on.  Uh yeah…happy birthday, Uncle Steve!  We celebrate with macaroni and cheese, and his personal favorite, chicken taquitos.  And we celebrate with the cake of his choice.  This year, the choice was cherry vanilla.  Now having tasted it I can say, stellar choice, Steve!

Cherry cake sounds pretty great in theory but it made me a little anxious.  It isn’t a slam dunk like raspberry or strawberry.  It requires more finesse because the flavor can be way too strong or barely there.  Thankfully this version was an all around winner and I thought the flavor balance was just right.  The cherry vanilla combo is awesome…but the chocolate fiend in me is also thinking that a cherry chocolate chip version could be even more spectacular.  Either way you go, it’s bound to be a winner.  If you haven’t tried Swiss meringue buttercream yet, now is the time!  We had a big crowd for his party and many people commented on how much they enjoyed the frosting because it was so smooth and light without being too sweet.  This is an all-around wonderful celebration cake and there is a distinct possibility that the cherry-chocolate version will make its debut at my birthday in January :)

Note: Since people always ask for a photo of the inside: Per my usual birthday party policy, I do not photograph the sliced cake.  Parties are about the birthday honoree, not the perfect photo!  However, I did take some photos of the assembly process (below).

Maraschino cherries with stems, for garnish