Dining at Alinea: An Unforgettable Experience 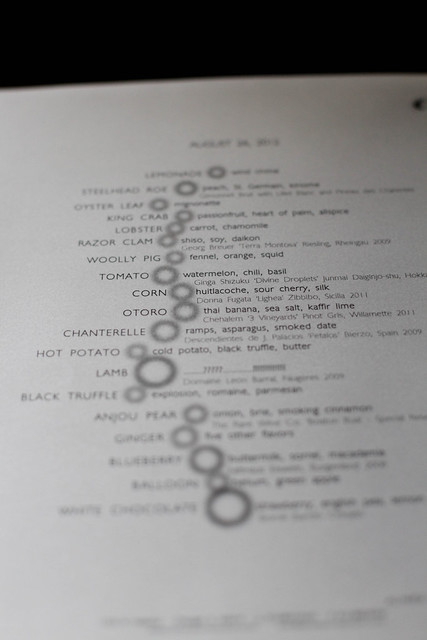 As my hipster friends and I apparently start 75% of our stories, it all started when, “I heard this story on NPR…”  One evening last year I was paged into work and as I often do, I tuned the car radio to our local public radio station for my drive.  It was an episode of Fresh Air with Chef Grant Achatz.  I caught it in the middle, so I wasn’t totally clued in, but the more I learned about Chef Achatz and his Chicago restaurant Alinea, I became enthralled.  It was tough to turn off the car because I just wanted to keep listening.  Months passed, life happened, and I sort of forgot about the whole thing until I was browsing my list of books to read and came across Life on the Line, an autobiography of Achatz including his road to creating Alinea.  The book is a great read, but it left me needing to experience Alinea in real life.  I mean, it’s in Chicago – just a few hours away!

I stalked their website for weeks and finally, after much frantic refreshing of my screen I was able to score tickets.  (Yes, tickets – read their site for more details.)  My wonderful friend and art director Ryan and his amazing wife joined us for what turned out to be a nearly indescribable experience.  This happened just over a week ago and still, I’m struggling to find any words that could to justice to this meal.  Because it was so much more than a meal.  It is food, science, art, and passion all at once.  Even having read the book and expecting something spectacular, I feel my mind would never be capable of dreaming up that fantastic night.

We were buzzing with anticipation as we approached the restaurant.  Thankfully I did enough internet stalking to know just what the building looked like because it is not labeled.  There is no sign outside, just a few attendants with iPads waiting to check in dinner guests.  (Ryan was very keen on the place having no sign at all.)  Though the evening was pitch dark and pouring down rain, we received a warm greeting before we even entered.  We were told that we would be experiencing summer, ushered inside, and the big black door closed behind us.  I won’t say exactly what we encountered at that moment for anyone who may be dining there soon, but we were, quite immediately, surrounded by sensations of summer.  After being escorted to our table, the waitstaff greeted us and our fifteen course meal began.

I won’t give the specifics of any courses, not because I’m worried about spoilers (because it’s impossible to describe in a way that would truly spoil it), but because it could never do the evening justice.  Alinea must be experienced in person to fully grasp its brilliance.
Though I have shared a photo of the menu, this spoils nothing because the preparations and presentations are so inventive and sometimes just wild.  Each dish delighted us as a clear portrayal of the talent and creativity of the chefs.  Yes, the food was fancy in its complexity but for me, the overall feeling of the meal, at least to me, was playful and fun.  I had a giant grin plastered on my face from the very beginning and it only grew as the evening progressed.  Despite the elite status of the establishment, the environment was not stuffy in the least.  The waitstaff were jovial and down to earth.  The meal concluded with a dessert finale that was literally jaw-dropping for everyone at our table.  The perfect finale though was that we requested and were welcomed to visit the kitchen.  Due to our late start time and the length of the meal, only clean up was occurring at that point but it was still incredible to see the artists that orchestrated our meal and be able to ask questions.  Unfortunately Chef Achatz was not there that evening but even so, his influence was clearly all around us.  The staff was very gracious and answered all of my questions until I couldn’t think of any more.

Suddenly it was all over and we were driving back in the wee hours of the morning.  Since, the whole thing seems a bit surreal…a very Alice in Wonderland experience, to be sure.  A few friends have asked me about it and it is so difficult to put into words, but I’ve done the best I can here.  That, and to add…we’ll be going back as soon as possible – hopefully before this year is out.