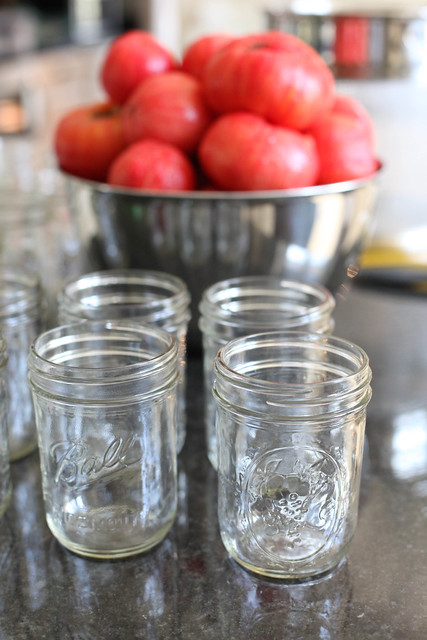 My move to making things from scratch as much has possible has been a slow progression over time.  At first it was just because I enjoyed the process.  Then I grew to appreciate that I knew exactly what went into my food and where it came from.  Eventually I became particularly interested in how I could produce less waste, particularly stemming from my use of processed foods.  Regularly making yogurt was a big leap for me, but now it’s part of the routine.  Cooking with dried beans helped cut down on wasted cans and that too has become routine.  But one processed item that is just so darned hard to get away from?  Canned tomatoes.  Last summer I tentatively made my first endeavor into canning with peach jam.  This summer my friend Ashley and I decided to take a stab at canning tomatoes.  We wanted to buy ripe summer tomatoes at their peak from local farmers and can them ourselves, thereby eliminating the need to buy canned tomatoes during the winter months.

In choosing exactly what types of tomatoes we wanted to can, we thought about what we use most in cooking.  Typically it is cans of diced, whole peeled, or crushed tomatoes.  With this in mind, we decided to make two varieties – quartered tomatoes and crushed tomatoes.  Canning is very much a science and since even minor changes can have effects on the preservation and safety of the food you can, it’s important to stick to the recipe.  The recipes warned against fully dicing the tomatoes before preserving because it would throw off the pH of the mixture.  We figured quartered tomatoes would be easily used in any recipes that called for either whole peeled tomatoes or diced (we’ll just quickly chop them ourselves before using).

The process ended up being pretty simple and lots of fun (do this with a friend!)  Since we are new at this, we decided to start on a small scale with just 20 pounds of tomatoes.  At the end of it all, we ended up with 10 pints of quartered tomatoes and eight pints of crushed tomatoes.  That’s a pretty nice yield if you ask me!  At the rate I actually use canned tomatoes (probably less than a can per week), maybe one more canning day and I’ll have plenty to keep me stocked through the winter.  Once the liquid has been drained, I found that a pint of my home canned tomatoes has a similar yield to a 15 ounce store bought can, or maybe just slightly less.  I suppose I shouldn’t be surprised, but the flavor was also noticeably fresher than from a regular can. 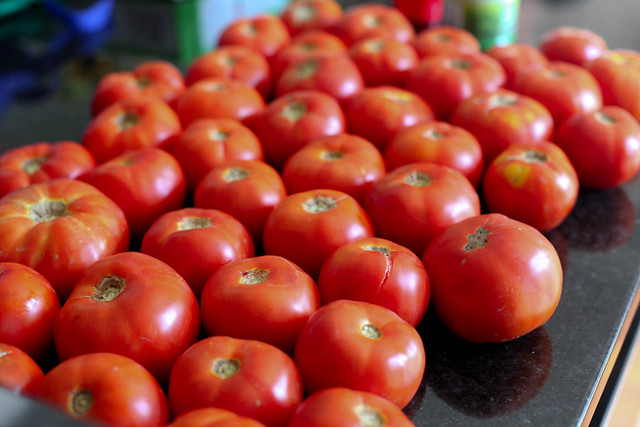 We got our tomatoes from a farmer’s market.  Some farmers may offer bulk options specifically for canning purposes, so find out about that if you can.  We’re planning on that next time. 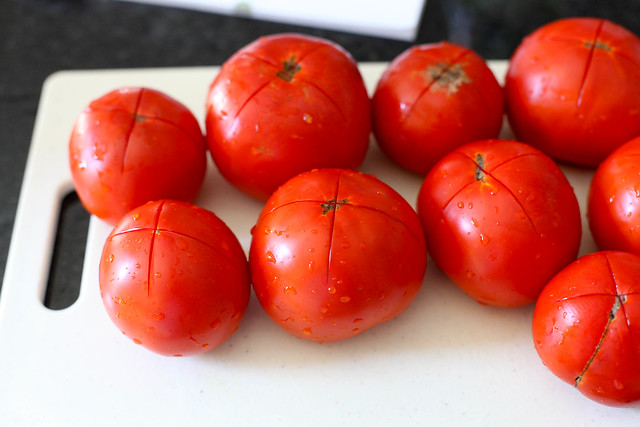 First, we made the quartered tomatoes.  To start, wash off the tomatoes and score the bottom of each with an “X”. 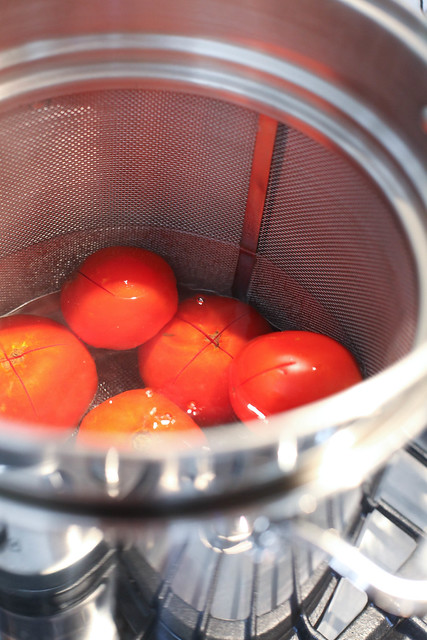 Quickly blanch them in boiling water for about 30 seconds, just to loosen the peels.  Remove immediately. 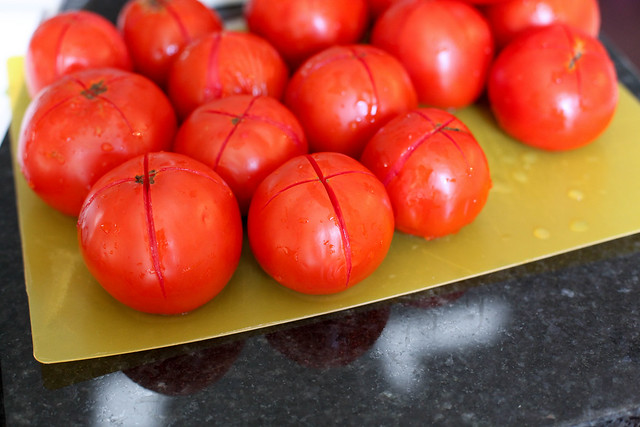 You should be able to see that the peels have loosened and pulled back slightly. 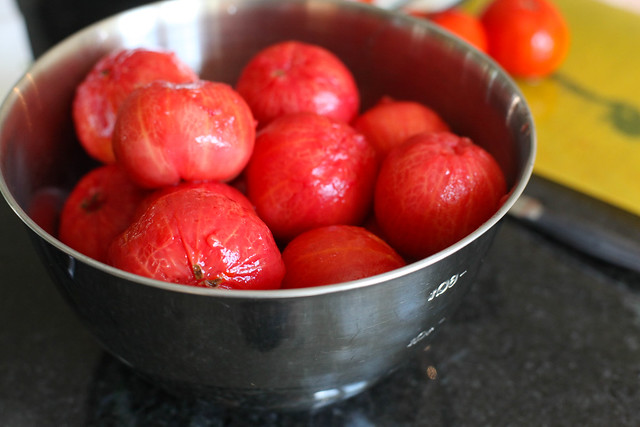 Once cool enough to handle, the skins can be easily peeled away and discarded. 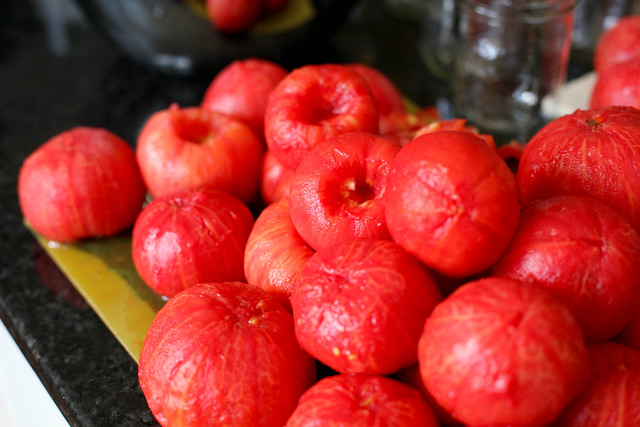 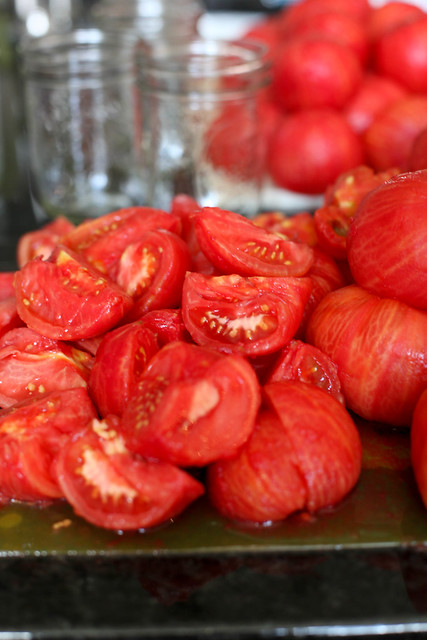 Cut them up into quarters.  (You may also opt to leave them whole or in halves.) 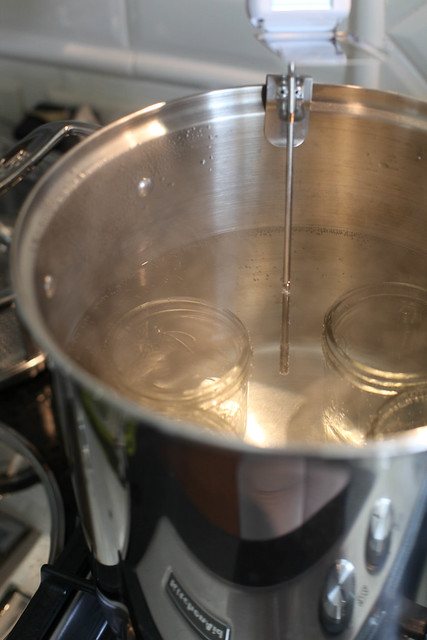 The tomatoes are now ready for canning.  Jars should be washed and dried in advance.  Heat the jars in a pot of hot water (about 180˚ F) until ready to fill.  This will prevent the jars from breaking when added to the canner.  At this point you should also have a boiling water canner nearly ready to go, with the water heating to 180˚ F.  (Side note – a boiling water canner is a great investment.  It’s about $40 for a large pot and accompanying rack.  Considering how much use I know I’ll get out of it, it seems like a steal.) 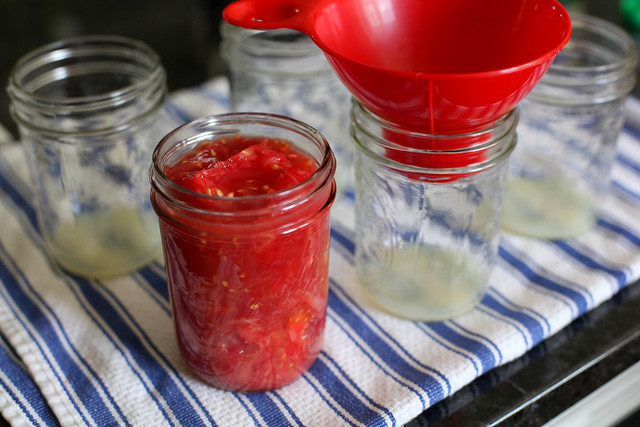 Add 1 tablespoon of bottled lemon juice to each pint.  Fill the warmed jars with the quartered tomatoes, pressing down gently so that the juice from the tomatoes fills the jar.  Leave ½-inch of head space at the top of each jar.  (You can also add up to 1 teaspoon of salt to each jar, but we left it out.) 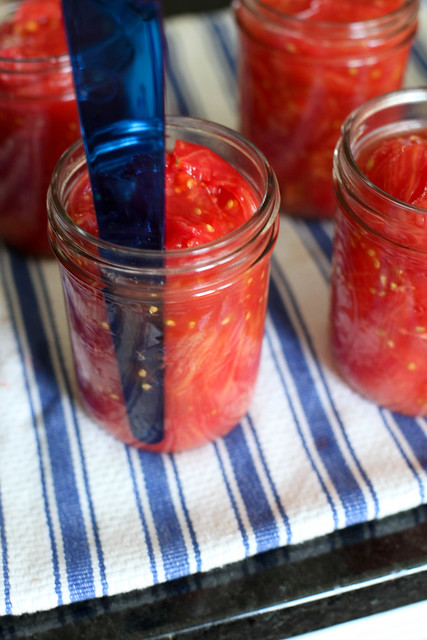 Run a flat spatula around the edges of the jar a few times to help remove air bubbles. 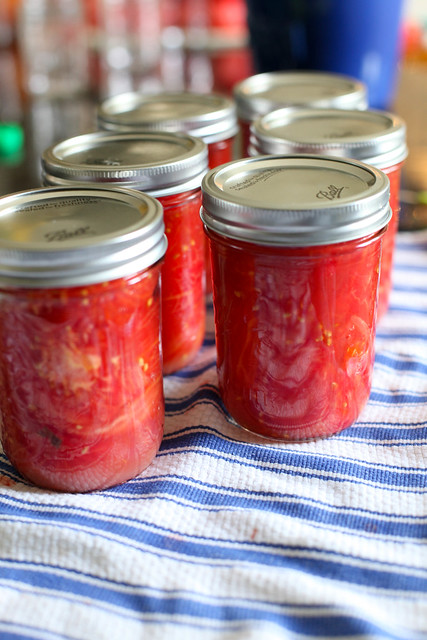 Wipe the edges of the jars with a clean dry cloth.  Place lids and rings on each jar, closing the rings just until you encounter resistance (not too tight). 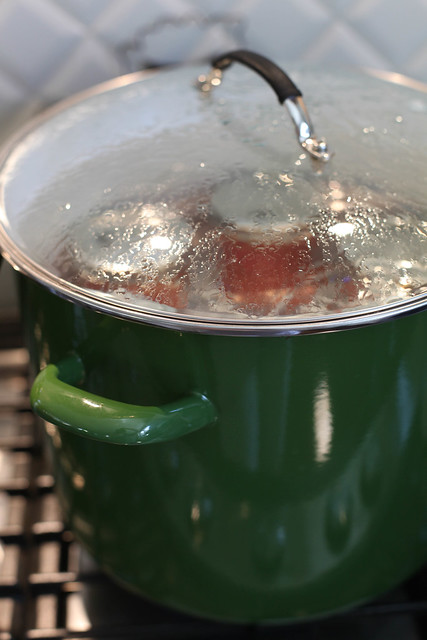 At this point, the jars can be loaded into the canner with the water at 180˚ F.  Lower the cans into the water so that it covers the lids by about 2 inches.  Bring the water to a rolling boil, cover and process for 45 minutes.  Processing times may vary slightly depending on your elevation, so be sure to check the specifics depending on where you live.  (I left that center space open – bad decision.  One jar fell over during processing and ended up with extra air inside.  The second round I simply added a jar of water to the center space to avoid that happening again.)  Note: Canning can also be done in a pressure cooker.  Again, check specifics for each recipe to find out the instructions for pressure canning. 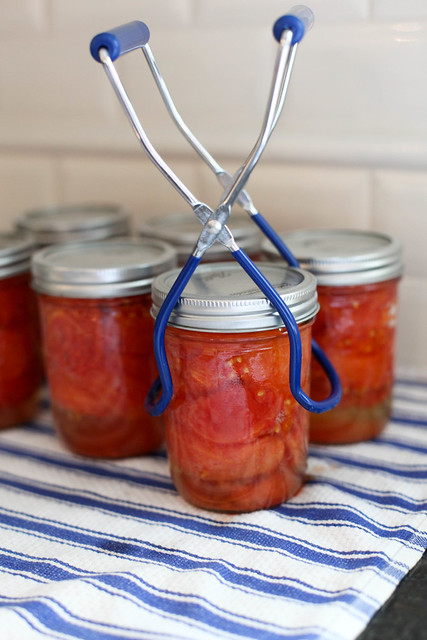 Once the jars have been processed as directed, remove with a jar gripper.  Let cool.  Set aside and let sit 24 hours.  Press the center of the lid to be sure it cannot be intended.  This indicates a proper seal.  Store in a cool, dark place.  That’s it – you canned tomatoes! 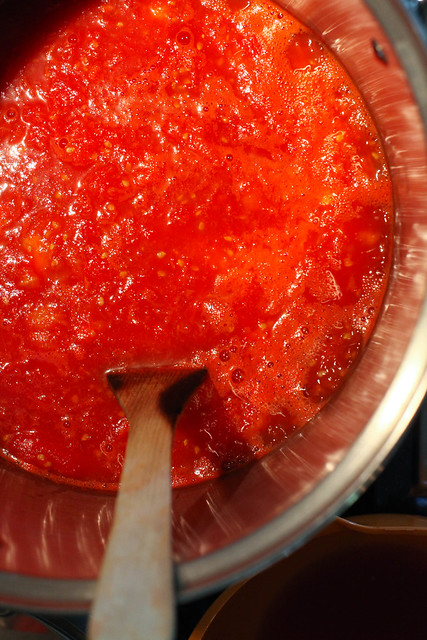 Then we made the crushed tomatoes.  These start out with basically the same process as the quartered tomatoes – wash, peel, core and quarter.  Add the quartered tomatoes to a large pot over medium heat in batches, stirring and crushing occasionally until they mostly softened with some chunks.  Let the mixture simmer briefly, about 5 minutes, to reduce the liquid slightly. 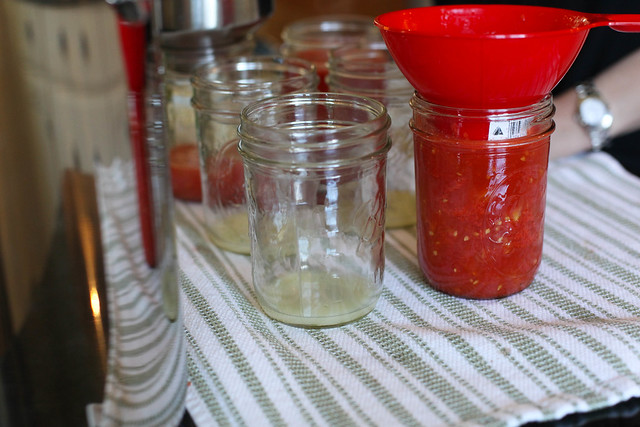 The crushed tomatoes are again added to clean, preheated jars with 1 tablespoon of lemon juice per jar.  Wipe the jars, and place the lids and rings.  Process in a boiling water canner for 35 minutes.  Remove with a jar gripper and set aside to cool 24 hours.  Press the center of the lids gently to check the seal.

I hope you find this edition of Making the Basics useful!  Canning may seem intimidating if you have not tried it before – believe me, I felt that way not so very long ago – but it really is just like following any other recipe.  You can do it!