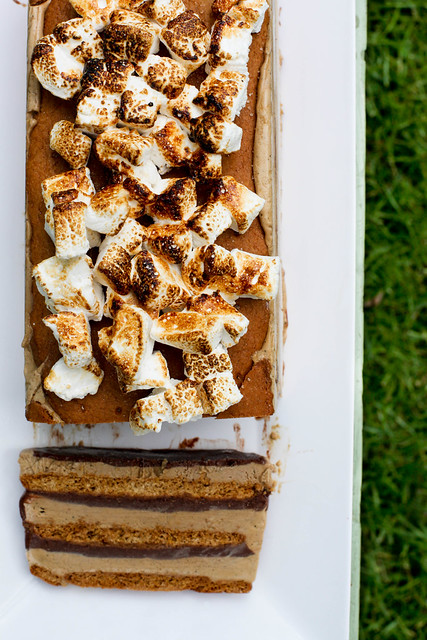 When I said I had been on a s’mores wavelength lately, I wasn’t kidding.  Combine that with my exuberant celebration of National Ice Cream Month and this is what you get: s’mores ice cream cake.  Last summer I made toasted marshmallow milkshake shooters for our ice cream social, and I was amazed at how well the flavor of the toasted marshmallow came through.  It’s been lurking in the back of my mind ever since, waiting for another opportunity to use the same technique in something awesome.  Here it is.

I layered homemade graham crackers with toasted marshmallow ice cream, and added hot fudge sauce for the chocolate component.  Once turned out of the pan, a simple topping of torched marshmallows finished it off.  Even though it looks fancy and complicated, all it really requires is a bit of patience during assembly to allow each layer to set.  I found a nice rhythm with mine:  Make the first layer and work out while it sets.  Make the second layer, shower and get ready while it chills.  Add the final layer and put your feet up for a second.  Then jump up immediately because the toddler is trying to eat the cat food again.  No, just me? 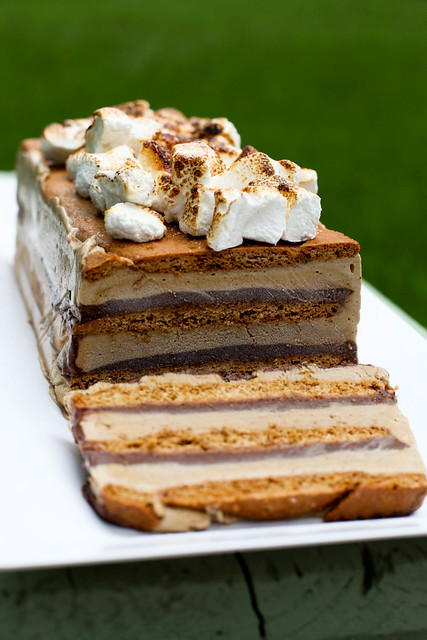 cake concept an Annie original, with various components as cited in their separate posts