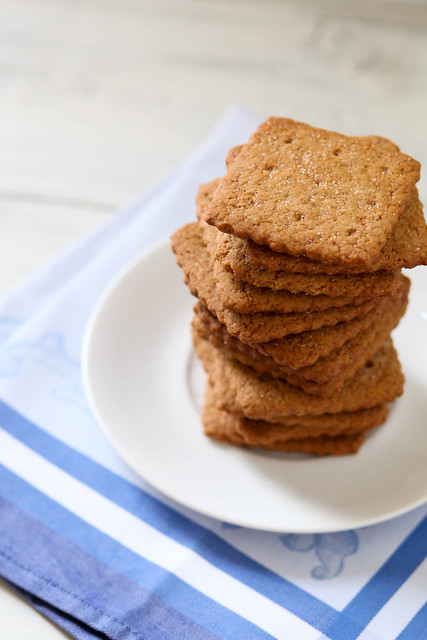 It’s news to no one that I’ve been on the DIY bandwagon for quite some time.  Though my homemade efforts have been primarily of the culinary sort, I have been trying my hand at all sorts of other domestic pursuits as well, and thoroughly enjoying it.  However, as much as I love to make things the homemade way, graham crackers are one item I honestly never expected to make from scratch.  Since we use them primarily for crumbling up and using in various desserts, it seemed sort of pointless to go to the trouble of making them if they were going to be destroyed instantly.

Andrew’s camp out-themed birthday party finally gave me the nudge I needed.  For a truly killer s’mores bar, even the graham crackers should be fancy, right?  Now it’s time for the usual refrain: I should have done this sooner.  The dough for these babies comes together in mere minutes and they were very easy to make.  They somehow simultaneously taste exactly like the store-bought kind we all know, but, you know, way better.  I’ve made them a few times now and I’m definitely converted.  A couple quick notes – I found that weighing the ingredients for this dough made for a perfect texture versus a dough that was a bit harder to work with when I measured by volume.  If you don’t have a kitchen scale yet, I promise it’s worth the investment.  Also, the original recipe indicates using a portion of whole wheat flour as a suggestion.  I found that the whole wheat flour gave these that perfect graham cracker-y flavor, so that’s what I call for below.  The cinnamon sugar topping is, of course, optional, but who can resist a good cinnamon sugar graham cracker?  Not I, my friends.  Not I.

Stay tuned next week for a truly fab dessert that uses this recipe.  In fact, just go ahead and get the dough ready now because I know you’re going to want to try it!

For the cinnamon-sugar topping: