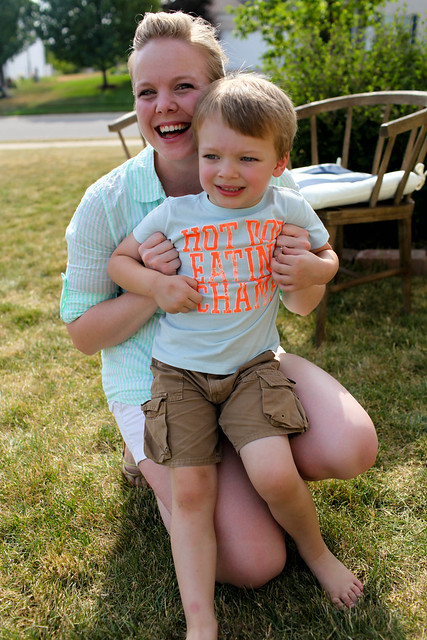 Each June for the past few years we have celebrated our sweet baby boy’s birthday.  But suddenly with the big FOUR, he’s not a baby at all – not even a little bit.  Not a toddler.  He’s suddenly such a big boy.  He talks to us all the time and he’s not only talking to us, but really interacting with us as his own little person.  It’s crazy awesome.  He has SO much personality, so many thoughts, emotions, questions, and is very opinionated (just like someone else I know…)  He never ceases to amaze us. 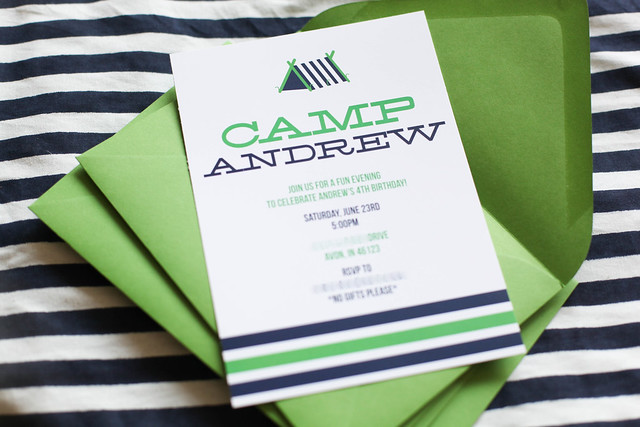 And so, when we asked our buddy what sort of birthday party he wanted this year he suggested an “outside party.” Thank goodness his birthday’s in the summer so this could become a reality!

Even though he had never actually been camping yet, within the past month or two he has been talking about camping in a tent and “roashing” marshmallows constantly. We decided to combine the ideas, and came up with Camp Andrew! 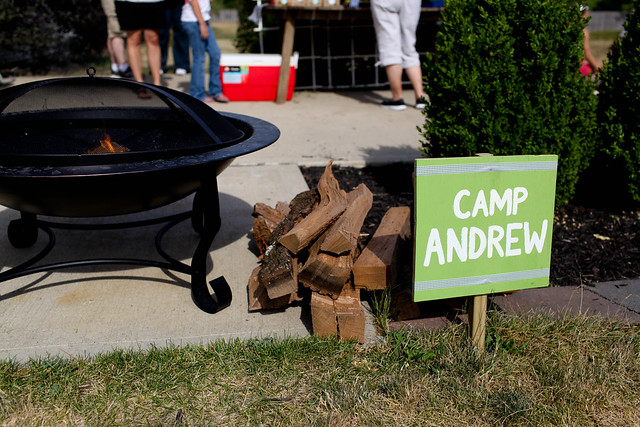 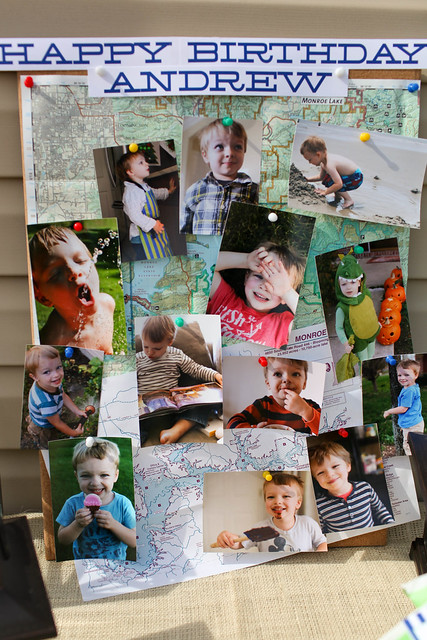 I set up this table at the entry area to display some photos of Andrew from the past year.  I used a bulletin board with maps of the forests and lakes in our hometown area as the background. The map of our little town is featured in the top corner and the lake where both of my brothers have worked every summer for the past several years is the main focus of both maps. Kind of fun :) I placed a few lanterns on this table, as well as plenty of sun block and bug spray for the guests. Sunblock is definitely a requirement for any outdoor summer party! 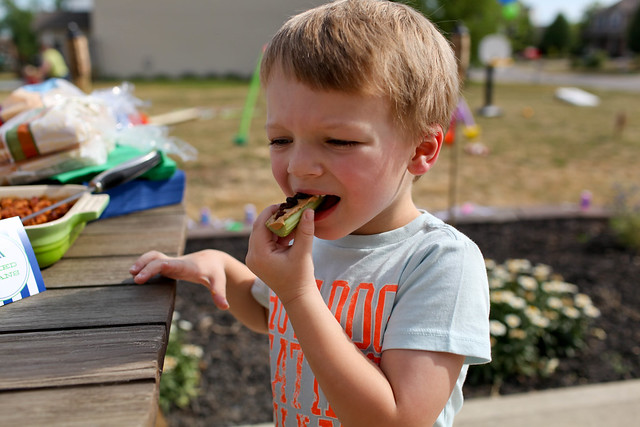 Not only is a camping-themed party totally summer appropriate, it’s one of the most low maintenance parties I’ve ever hosted.  (I mean, it’s still me so I overcomplicated everything, but you know what I mean.)  Since classic camping foods are mostly hot dogs and chips with the occasional side of baked beans, the menu was pretty simple.  Heck, the guests cooked their own entree over the fire pit – it doesn’t get much easier! 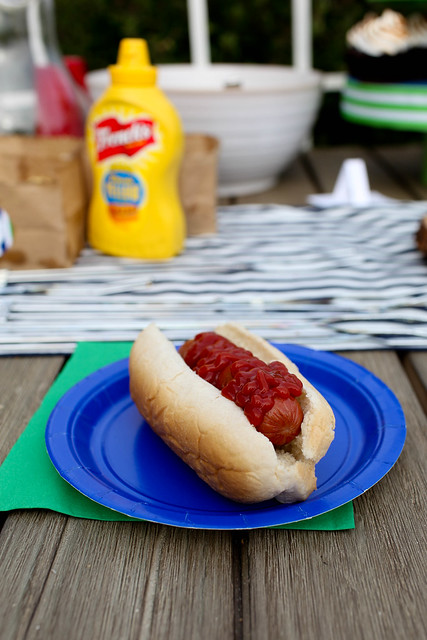 Unfortunately the guests descended on everything so quickly that I wasn’t able to get a photo of the overall table set up, but that’s okay.  I would much rather everyone feel relaxed and enjoy themselves than worry about getting a perfect photo.

*First time I’ve ever enjoyed baked beans in my life.  Maybe making them homemade is the answer!
**Yes, this is the caprese pasta salad I mentioned last year and have since had the recipe requested at least 100 times.  It’s coming, I promise!  At least I wrote it down this time. 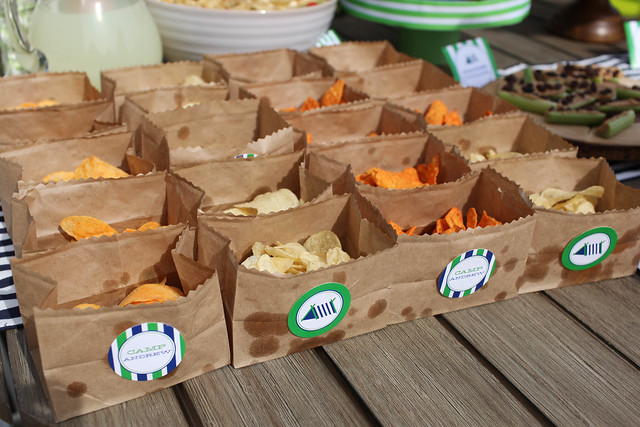 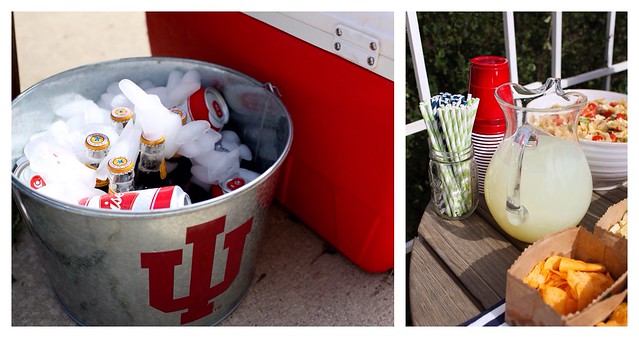 It’s always important to have plenty of beverages but for a summer party in the heat, make extra sure your guests will be hydrated! 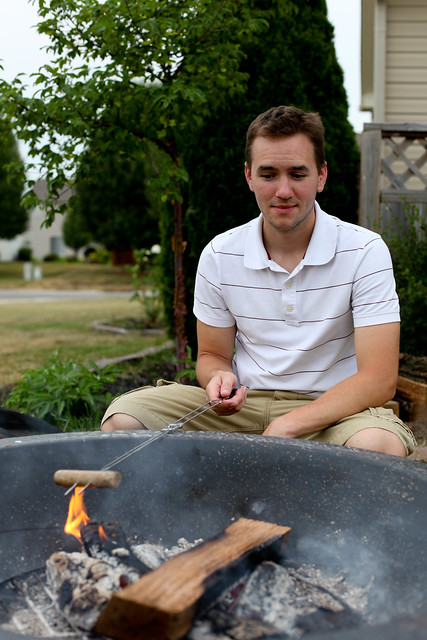 Ben’s face here just kills me.  One of my favorite pictures ever. 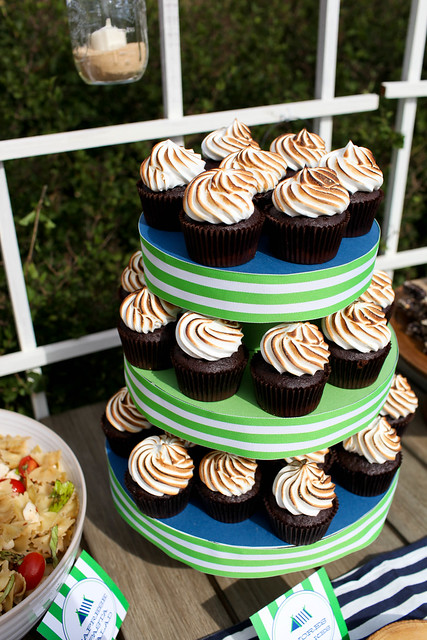 If there is one variety of cupcake I make that gets the most “oohs” and “aahs”, it has to be the s’mores cupcake.  Just the quick help of a star-tipped pastry bag and a kitchen torch make them look impressive, but it’s really not complicated at all.  I redecorated the cupcake tower I used from Caroline’s birthday with new card stock and ribbon to fit with the green and navy color scheme.  (I have updated this recipe and will be sharing the revised version next week.) 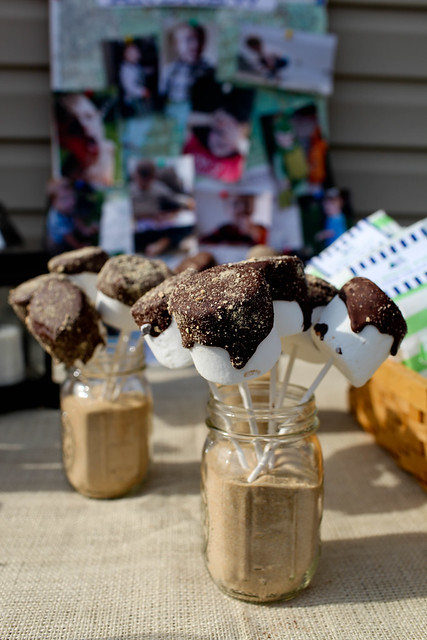 I thought it would be fun to have multiple s’mores-themed dessert items so we had a few of these s’mores pops ready.  Basically just a jumbo marshmallow on a stick with melted chocolate and graham cracker crumbs.  These were very popular with the kids.  I think they just love food on sticks! 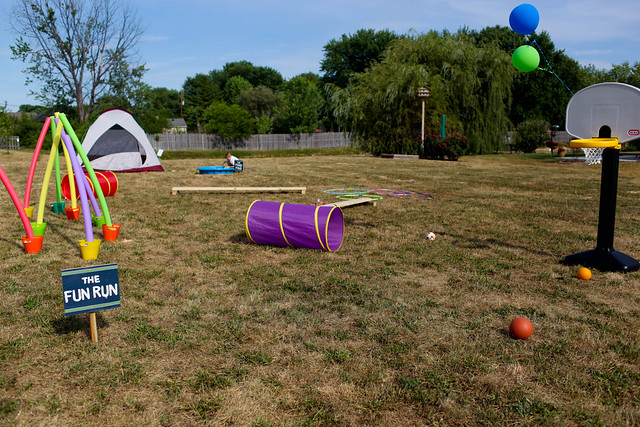 Of course there was much more to this party than just food!  Since there were so many kids attending and since we were outdoors, lots of fun activities were in order.  My always-brilliant friend Amanda suggested an obstacle course and I loved the idea!  I wanted to keep it cheap, versatile, and simple since most of the kids were fairly young.  We made a sort of tunnel from foam noodles in weighted buckets, used play tubes we already had in our playroom, made a couple of balance beams, put out some hula hoops, and used the little basketball goal from our playroom.  We were also going to have a bowl of water balloons at the end but Andrew bombed them all in approximately 30 seconds.  Not so much with the sharing sometimes.  (And just in case you were wondering, I agonized over what to name the course for days.  Nothing that sounded good made sense and vice versa, but as usual The Office came to the rescue a la the Michael Scott Rabies Fun Run.  Bam.) 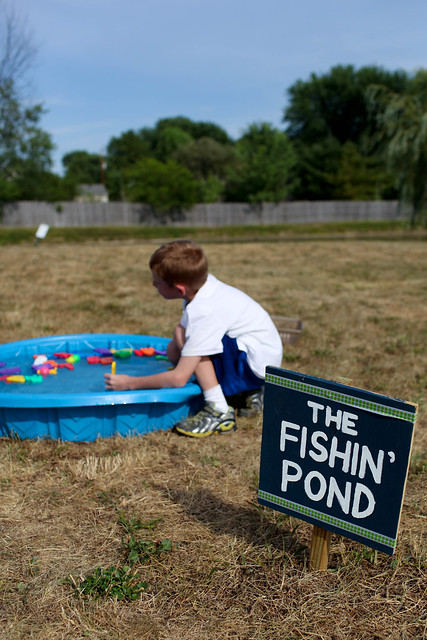 We also wanted to do a fishin’ pond (just a kiddie pool with bath toys) but as the day went on, it became a plain old swimming pool and Andrew kept calling it the “water hole”.  Haha!  (Side note:  Our yard might as well be the dessert.  We need rain!) 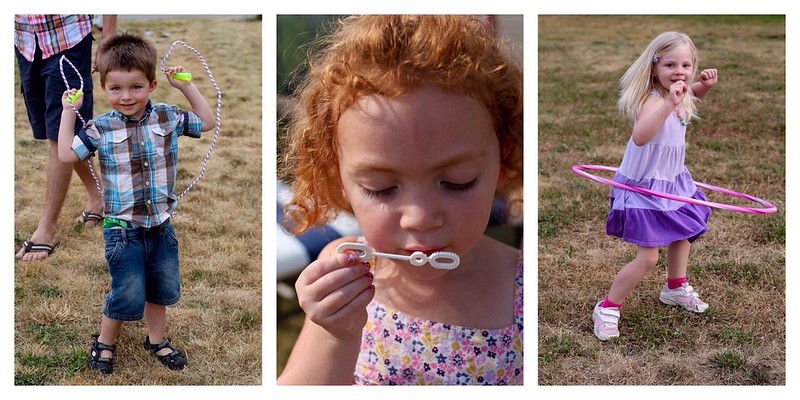 I’d say the kids enjoyed themselves. 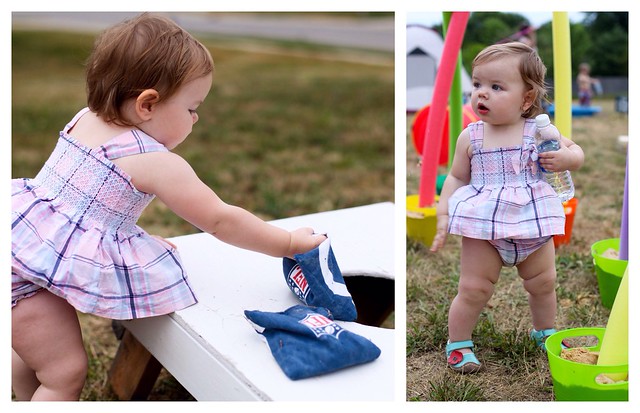 Caroline celebrated in true Hoosier style and played some corn hole.  Too cute! 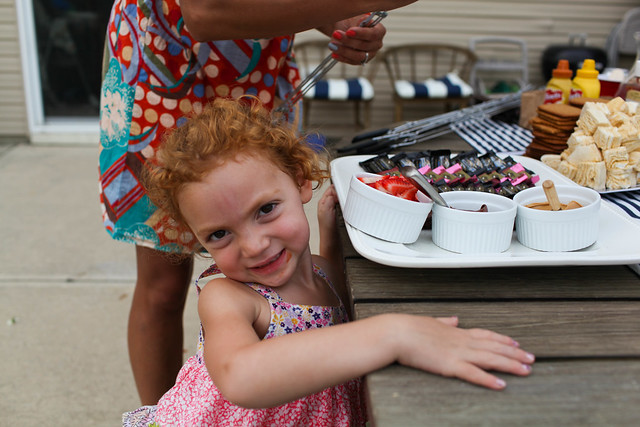 As the sun started to go down, a bunch of the kids reminded me of the s’mores platters that had been sitting inside taunting them all evening.  I quickly brought them outside and they got to work.  I wanted to make these s’mores extra-fabulous so I went for homemade marshmallows (vanilla bean and salted caramel varieties), homemade graham crackers, assorted chocolate, sliced strawberries, peanut butter and Nutella.  Aaand, we’ve definitely found what I’ll be having for dessert for basically the rest of the summer.  It was so fun trying different flavor combinations. 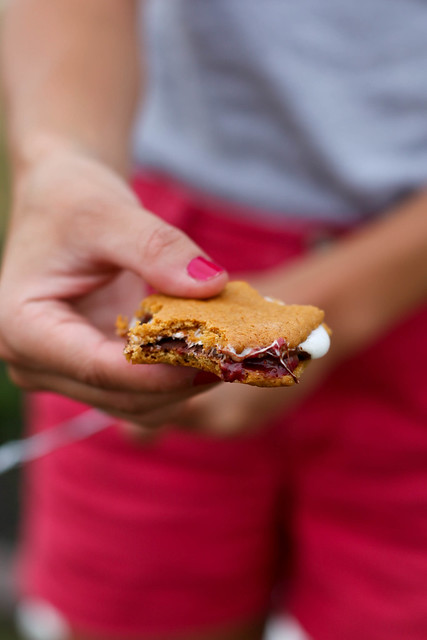 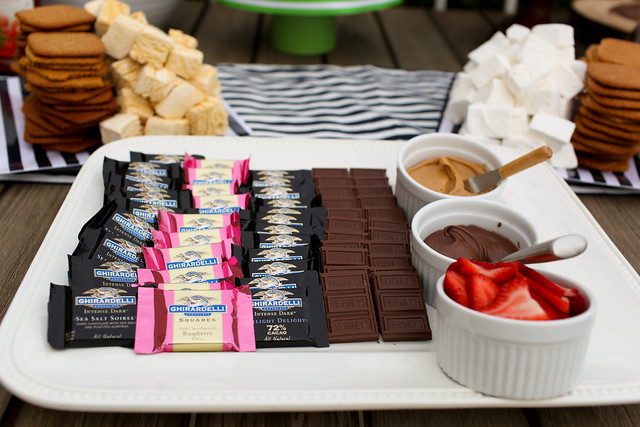 The raspberry Ghirardelli squares make s’mores that are out of this world.  Try it ASAP.  I’m not kidding. 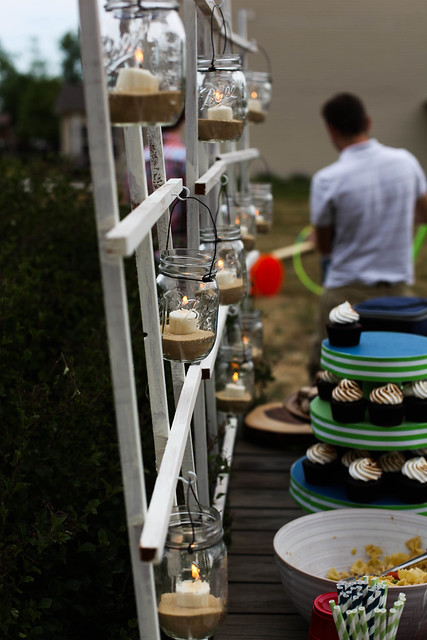 You know I couldn’t throw a party with out somehow involving mason jars! I made some mason jar lanterns to help light up the area when it began to get dark.  I loved the way they turned out.  They added a nice ambience and were so easy to make.   We bought a few trellises and I painted them with leftover paint in the garage to make a nice backdrop for the table. 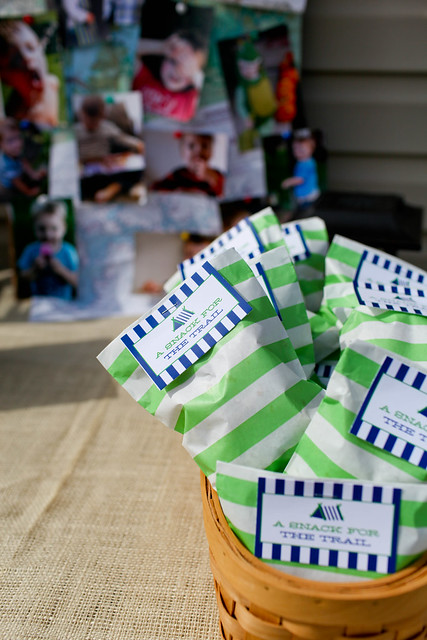 As guests left, we had a basket of “trail mix” to-go bags.  I use the term trail mix loosely here because what I really mean is caramel corn mixed with M&Ms, pretzel M&Ms, honey roasted peanuts and raisins.  Not exactly a healthy trail snack…more like a drug with addictive properties.  You’ve been warned. 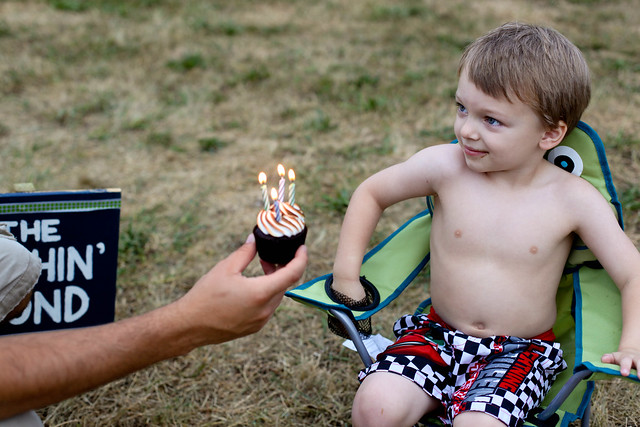 All in all, my buddy had a totally fabulous time at the party.  After everyone had left and just family was left sitting around the fire pit, he said, “Mom, thanks for the party.  I just love my birthday.”  Seriously, this kid melts my heart every day.  I feel unbelievably lucky to have him in my life.  And to make a perfect end to his perfect day, he, Ben, and Uncle Steve camped out in the tent that night…and I got the king-size bed all to myself :)

Do you have any great birthday party ideas for kids? Share them in the comments below.