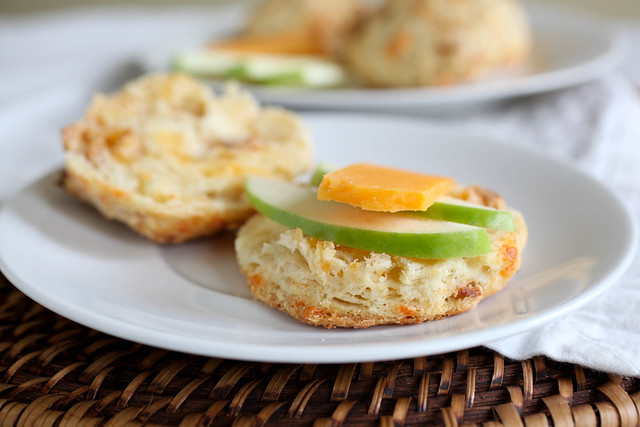 Though my mom enjoyed cooking and baking, I don’t really have a ton of memories of being in the kitchen with her.  This probably due to both my lack of interest in anything culinary as a child, as well as her being ill and not feeling well enough for such things a lot of the time.  Unfortunately there aren’t tons of dishes that I associate with her or things that I remember her making for our family.  I do, however, vividly remember some muffins that she made – apple cheddar muffins.  The first time she made them and told me what was in them, I thought she was crazy.  Apples and cheese?  Gross!  She persuaded me to at least try one and I was pleasantly surprised by how well the combination worked.  I loved them.

After she died and I was old enough to do things in the kitchen without burning down the house, I looked everywhere for the recipe.  I searched her recipe boxes and all of her cookbooks, but to no avail.  As an adult I’ve seen that apples and cheddar are a fairly well known pairing, or at least more than my childhood psyche could comprehend.  Some people eat their apple pie with a slice of cheddar cheese.  While I haven’t gone that far (yet), I have been yearning to recreate something similar in my own kitchen, with my favorite baking partner.

I had to laugh when I told Andrew what we would be making and he didn’t blink an eye at what had seemed such a strange combination to me.  This kid has been in the kitchen with me since he was old enough to stand on his step stool and he absolutely loves helping.  I decided to make biscuits rather than muffins because they are a bit more involved, and incorporate several more kitchen techniques that Andrew loves – using the food processor to shred cheese, rolling out dough, and using a cutter to make shapes.  (He chose a star cutter for his biscuits.)  Our whole family loved how these biscuits turned out.  The sweet apple and sharp cheddar provide the ideal savory-sweet balance to the fluffy, tender biscuit dough.  I enjoyed eating them as pictured above, with additional sliced apple and cheddar to enhance the flavors even further.  Biscuits make a great kitchen project with kids with plenty of measuring, mixing and tactile sensory experiences.  Make them with someone you love, and I hope you enjoy them as much as we do!

Note: This recipe was developed as part of my ongoing contribution to the Go Bold with Butter blog.  Head over to see my posts as well as those of the other awesome bloggers involved with the project!