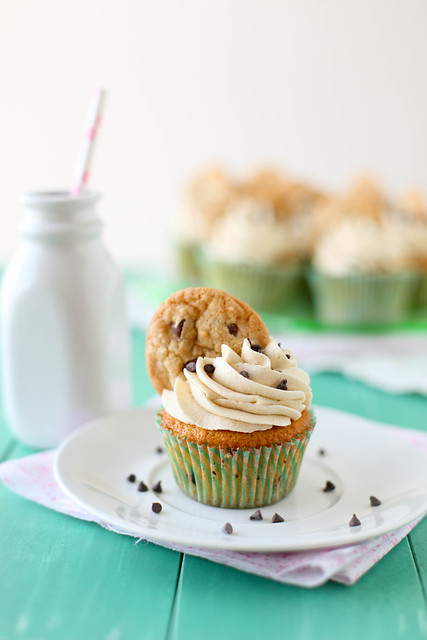 With the passing of my 5 year blogiversary and looking forward to the next five years, I’ve decided to start occasionally highlighting recipes from the archives that deserved some updating for one reason or another.  Maybe the former picture wasn’t so hot (and thanks to Pinterest, those horrible photos end up being perpetuated all over the place – blech).  Maybe I’ve made the recipe enough times and along the way, I’ve found small changes in the method that make the final product even better.  Maybe it’s a recipe that has been buried deep within the ever-growing archives that definitely deserves your attention.  Or it could be a combination of any of these.  It’s not going to be a weekly occurrence, but just whenever a recipe is in need of some updating.  The ever popular chocolate chip cookie dough cupcakes seemed like a perfect candidate to introduce this series, for the sake of both the photos and a few minor recipe changes (namely, scaling down the quantity of the frosting recipe because even for me, it was really too much.) 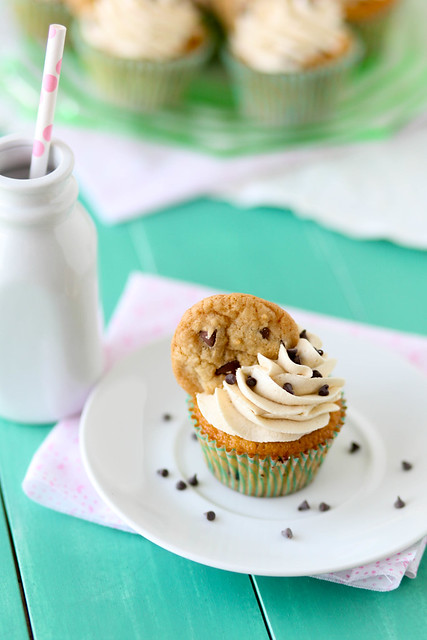 Here’s the run down on these bad boys, in case you are one of the 2% who haven’t tried them yet (say what?)  They start with a moist brown sugar cupcake with chocolate chips mixed into the batter.  After baking, you use the cone method to fill the cupcakes with eggless cookie dough so they are totally safe to eat.  They are finished off with a generous swirl of cookie dough frosting – yes, frosting that really tastes like cookie dough!  And personally I think they are not complete without a garnish of a mini chocolate chip cookie and some mini chocolate chips.  These are by far the most popular cupcake choice among coworkers and friends, and for good reason.  Try them yourself and see what all the fuss is about.

Note: As with most multi-component desserts, I prefer to make these over a day or two rather than all at once.  I usually bake the cupcakes and mini cookies on one day, then fill, frost and assemble the next.  Much easier and less stressful.

For today’s blogiversary week giveaway, you have a chance to win one of three cookbooks off of my current cookbook wish list.  Head on over to the giveaway page to enter!

inspired by Hello, Baker!, cake adapted from Cupcake Bakeshop, frosting adapted from The Cupcake Review, filling from How to Eat a Cupcake