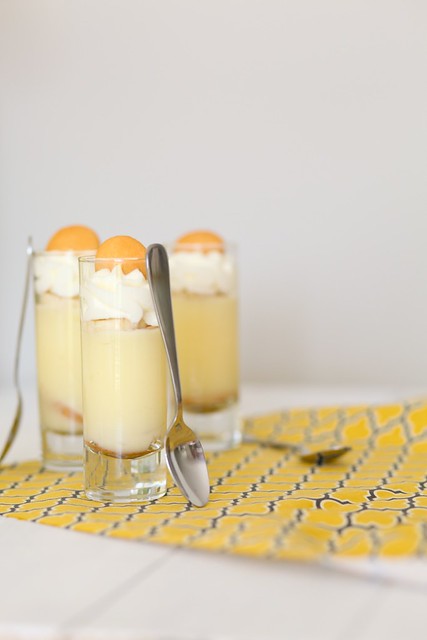 For those who are raised in the south, banana pudding is a staple dessert item.  However, for this midwestern girl, banana pudding is something I had never even heard of until just a couple of years ago thanks to the wonderful world of food blogs.  And when I did finally learn of it, I was surprised that it was not banana-flavored pudding, but rather vanilla pudding layered with sliced bananas and vanilla wafers.  That little detail sort of turned me off to the concept for a while but then, just as with banana cream pie, I realized I could add banana flavoring.  Apparently the classic version is also topped with meringue, but I’m not a huge fan so I swapped it out for freshly whipped cream.  So basically what I ended up with was a parfait version of banana cream pie with vanilla wafers instead of crust.  Fine by me, and more than fine by our guests.  Of all the dessert items at the party, these were the favorite by far.  It seems as though we midwesterners know a good thing when we taste it.  This stuff is truly addictive.  You have been warned!

Southern Living via My Recipes