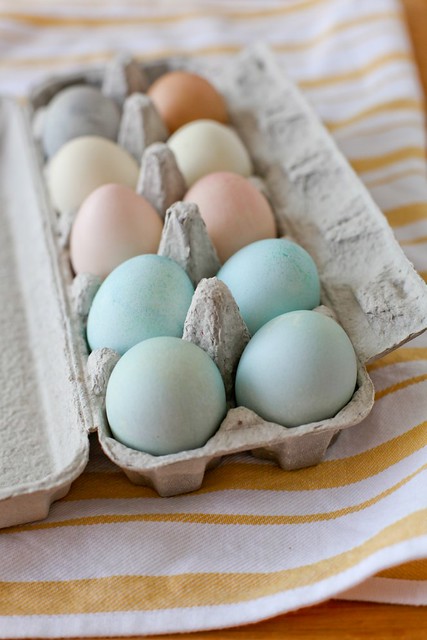 When I was growing up, my favorite thing about Easter (other than the Cadbury eggs) was dying Easter eggs with my family.  Every year, like so many other families, we used those fizzy tablets to make intensely bright eggs.  Last year I dyed some eggs for Andrew but he wasn’t super into it.  This year though, as soon as I mentioned it, he was all ears.  And then I started thinking about what exactly might be in those fizzy tablets and whether I might be able to just find a way to dye eggs with things we already had around the house.  It just so happened that I had unintentionally received some beets in our produce bin that week and since I haven’t yet come around to beets, I thought they might be good for dying eggs.  A bit of internet research showed me that yes, I could use the beets for dying eggs and in fact, I already had nearly everything to make a variety of colors.  I wasn’t very optimistic that it would work out but I thought it would at the very least be a fun experiment for us. 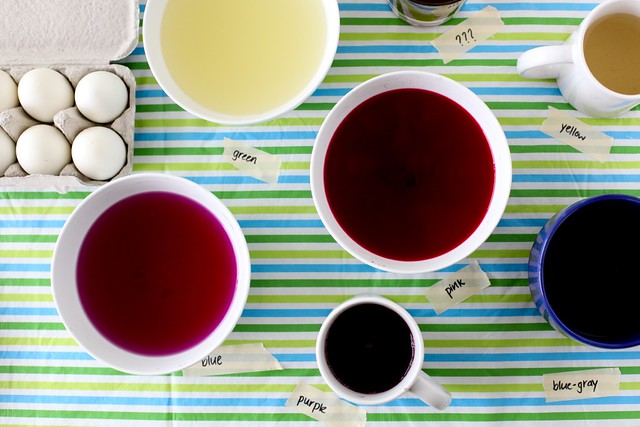 As it turned out, most of our experiments were successful.  The colors aren’t quite as vivid or intense as those from the fizzy tablets, but I am more than okay with that.  It was a lot of fun and a good learning opportunity for Andrew to discuss what we thought might happen with each of the different fruits and veggies we used. 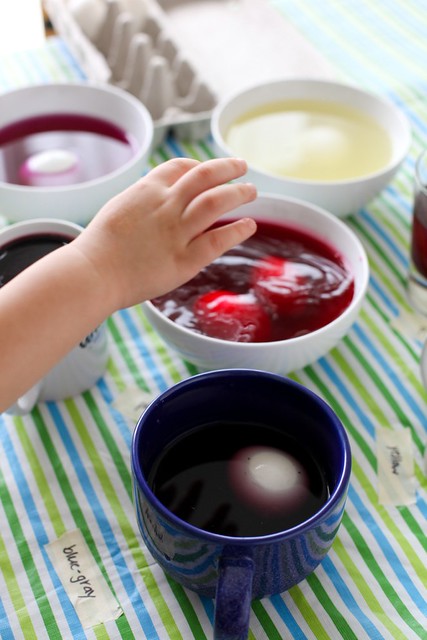 The spinach was a last minute whim for me because I had a sneaking suspicion that the red onion peels would not actually yield a green color, and that turned out to be correct.  As you can see above, the green from the spinach was very pale but I think if I had simmered it for a while it would have been better.  I think broccoli also probably would have worked after simmering.  I’ve listed the versions of dye recipes that we used below, along with notes of what I might change next time.  Don’t limit yourself to these options though.  Explore your fridge and pantry for other potential sources of natural food coloring.  Here’s another resource I ran across after we had already finished our eggs.  I’d love to hear what other coloring options have worked for you! 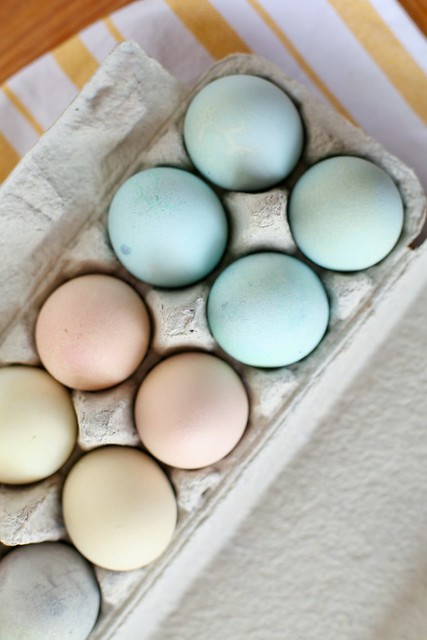 Light green-yellow:
Combine 3 cups baby spinach leaves with 2 cups water in a small saucepan.  Bring to a boil, reduce to a simmer and let cook for 5-10 minutes.  Strain out the spinach.  Stir in 1 tablespoon vinegar.

Yellow:
Combine 4 ounces of peeled, chopped carrot tops with 1½ cups water in a small saucepan.  Bring to a boil, reduce to a simmer and let cook for 15 minutes.  Remove the carrots. Add 2 teaspoons white vinegar.  Let cool to room temperature.