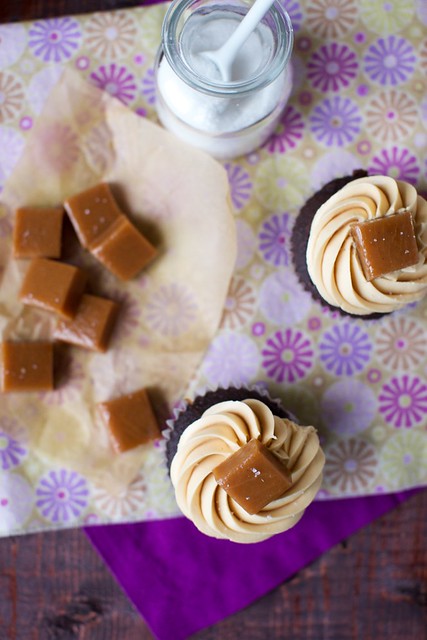 I have been waiting and waiting for someone to choose this cupcake flavor.  In fact, I was thisclose to choosing it myself, but as luck would have it, the birthday girl just a few days before me chose it for herself.  (Nice work, Sarah!)  It hardly seems possible that I have never made a chocolate-caramel cupcake before, but it’s true.  I ended up using my usual favorite chocolate cupcake as the base and added a salted caramel filling.  This was the part I was most nervous about because caramel can be so touchy.  Cook it too long and you may not even be able to chew it, but cook it too little and you might have a gooey mess, at least when it’s filling a cupcake.  I used a Martha Stewart recipe as a starting point but followed my instincts to be sure that the caramel wasn’t going to be rock hard or totally burned.  Thankfully all my caramel making experience has paid off because the filling was just right: deeply caramelized and chewy, neither too hard nor too soft.  I topped it off with a salted caramel buttercream and garnished with my beloved homemade caramels. 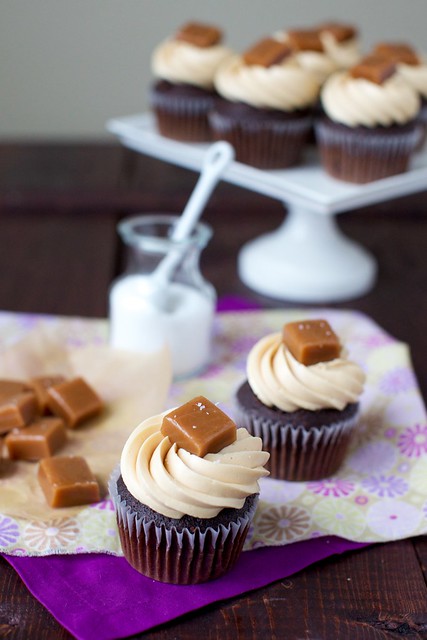 Oh man, this is one rich cupcake.  The caramel buttercream in particular is very rich and you don’t want to overdo it.  As written, this is primarily a caramel cupcake but if you want to tip the flavor balance more in favor of the chocolate, you could use a bit less buttercream, chill the frosted cupcakes, and then drizzle with a bit of ganache.  Only do this if you’re as crazy as I am, because I think that sounds awesome :)  Either way, if you are a chocolate-caramel lover, this is the cupcake for you.