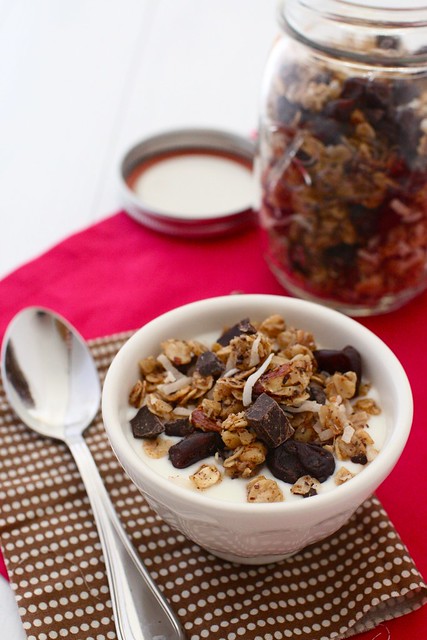 Happy Monday everyone!  Let’s talk about breakfast.  In the past few years, I’ve made many changes in our kitchen, making more and more things the homemade way rather than purchasing pre-packaged items.  One of the hardest habits for me to kick was my cereal habit.  I grew up eating a bowl of cereal for breakfast pretty much every single day, and so I continued that pattern well into adulthood.  But, I was starting to get really sick of it.  Plus, the nutritional value was somewhat lacking.  (I realize there are healthy cereals out there, but I just couldn’t get on board with any of those.  I was more into things like Count Chocula.)  The change started with finding several varieties of oatmeal that I not only liked, but loved, and I realized I could be getting more out of my breakfast.  Even oatmeal gets old after a while, so I like to mix it up with some crave-worthy granola over yogurt. 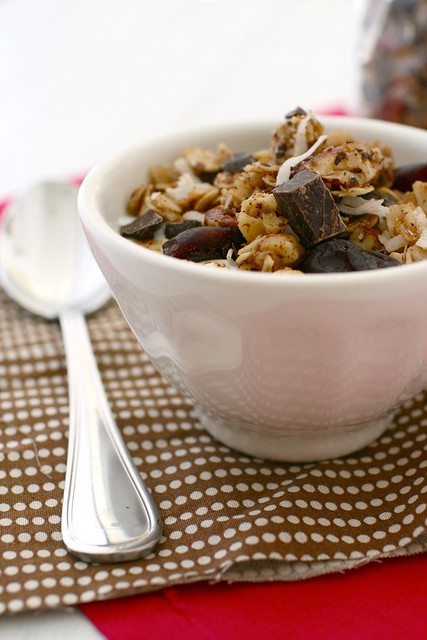 Ben is particularly fond of granola and would often buy it from the store…but that just seemed wasteful because it’s so incredibly easy to make good granola at home.  Not to mention, store bought granola often appears healthy but a quick peek at the ingredient list or nutrition facts can reveal otherwise.  What better way to control all of that than to make your own?  One of his favorite flavors was a cherry-chocolate-coconut variety so I set out to create a homemade version.  I ended up including this in our holiday goodie packages this year and it was definitely well received.  This has become a staple in our home and the moment we run out, I whip up another batch.  I can happily say that I don’t even remember the last time I bought a box of cereal.  (I wish I could say the same for my family but for now, I’m just trying to lead by example.)