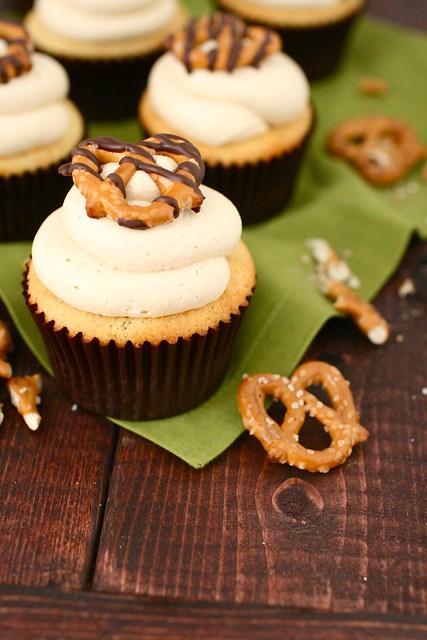 Our trip to Ben & Jerry’s was such fun and (after a brief recovery from the mini Vermonster) it left me so inspired.  Their passion for the craft of ice cream making and their unique and constant stream of creative concoctions was infectious.  I could not wait to get home and make a Ben & Jerry’s inspired treat.  And you all know what I love to do…I take other things and make them into cupcakes.  These cupcakes are based off the Chubby Hubby flavor of Ben & Jerry’s pints – a malted vanilla base with a peanut butter swirl and chocolate covered pretzels.  Using this as my inspiration, I set out to make a malted vanilla cupcake base with a chocolate pretzel filling and peanut butter frosting.  As it turns out, apparently every malt cake recipe in the history of the world is for chocolate malt cake, or at least that’s what close to an hour of research uncovered.  So I decided to make some adaptations to my go-to vanilla cupcake recipe and cross my fingers.  Good news – it worked.  Even better news?  The malt powder added a really amazing touch to the cupcakes.  It was a subtle flavor but ultimately I think this could potentially be my new favorite vanilla cupcake base.  I guess I probably wouldn’t use it all the time since they require a specialty ingredient, but man, the cake alone was wonderful.  (Note: I purchased my malted milk powder from King Arthur Flour.)

So then, we take that awesome vanilla malt cake and using the cone method, fill it with dark chocolate ganache and pretzel pieces, and top it with a whipped peanut butter frosting.  I originally had a peanut butter cream cheese frosting in mind but realized I was out of cream cheese and it was past 10 o’clock at night.  Instead I improvised with what I had on hand and ended up being glad for it because this frosting was absolutely wonderful.  These were a major hit with everyone who got to try them and struck a nice balance between sweet and salty.  The only slight issue was that the pieces of pretzel did lose some of their crunch after being in the ganache.  One potential remedy to this might be adding in a few pretzel M&M’s in lieu of chopped pretzels.  I cannot wait to play around with more cupcake renditions of Ben & Jerry’s flavors.  This could become a fun and tasty project! 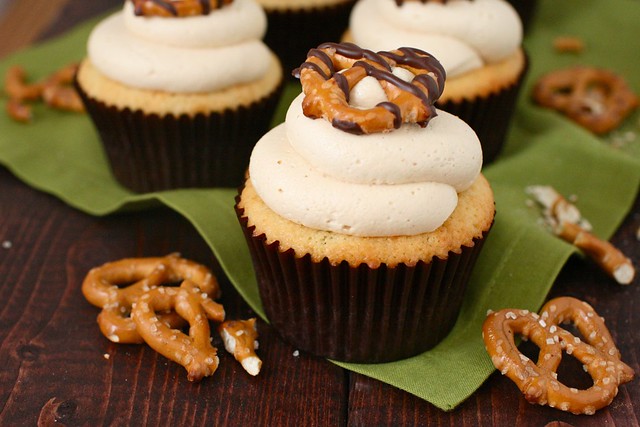 Quick housekeeping note: Thanks to everyone who entered the Vermont themed giveaways from last week.  I loved hearing about your favorite cheeses, and also your dream foodie vacation destinations.  I added quite a few to my own list from your suggestions!  Without further ado, the prizes go to…

The winner of the Vermont package including Dishing Up Vermont, a maple syrup sampler and a piece of maple candy is Kristy who said, “What: A strong, sharp cheddar…like Irish Dubliner cheese.  How: Sliced thin on whole grain bread with crisp apple slices, seed-y mustard, and roasted red peppers!  OR, along side a juicy pear.”

The winner of the King Arthur package is Kristan who said, “I would love to go to San Fransisco and Seattle.”

Congrats to both of you!