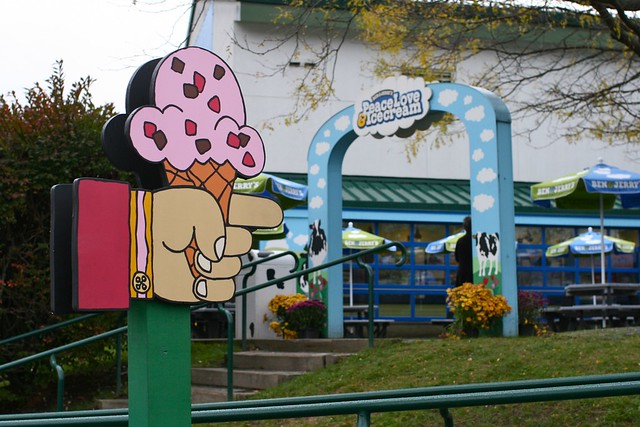 I have to admit that other than seeing Shanon and visiting Grafton, visiting the Ben & Jerry’s factory was one of my main reasons for wanting to visit Vermont.  I mean, I love ice cream, and Ben & Jerry’s is such a cool, fun-loving company, I was dying to see this place in person.  Also, I have always wanted to attempt and hopefully conquer the Vermonster ice cream sundae.  (More on this below…)  One day we made the trip up to Burlington, Vermont where the factory is located.  From the moment we walked up the hill, we knew it was going to be a ton of fun. 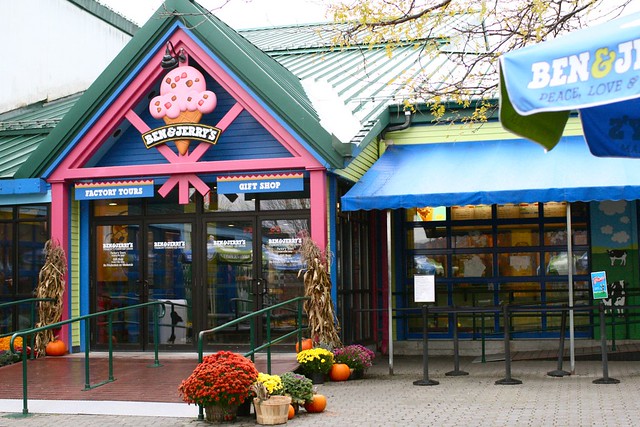 Every inch of this place was in line with the fun and kooky ice cream-loving philosophy of this company.  It puts an instant smile on your face. 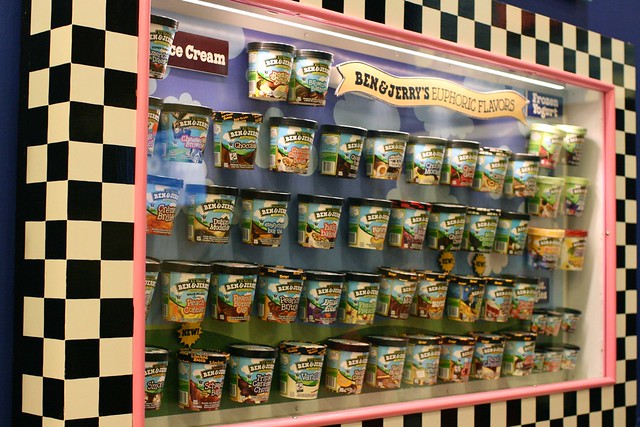 As luck would have it, a tour of the factory was starting just a few minutes after we arrived so we bought tickets (very cheap, something like $5) and got ready to go.  While we were waiting, we took a peek at this fun display case with all the different Ben & Jerry’s flavors. 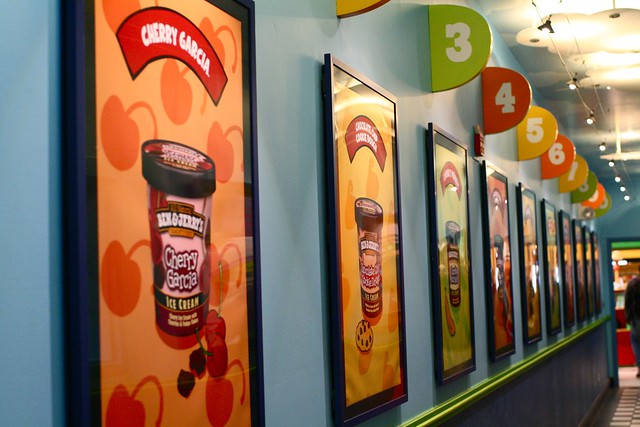 There were no photos allowed for most of the tour itself, but it was way cool.  It starts out with a brief and very funny video about how Ben & Jerry started the company, how it grew, and what they are working towards today.  Some things I already knew, like the fact that they first learned about ice cream making through a correspondence course on the topic.  Some information was new to me, like the fact that their traveling ice cream van caught on fire (!) in Ohio in what turned out to be a happy accident thanks to the publicity they received from it.  I also really enjoyed learning about their social mission and what they are doing to achieve those goals.  As if I didn’t already love them enough, this took it to another level.  After the video, we were escorted to a viewing area where we were able to watch the factory’s inner workings where the ice cream is made, packaged, and stored.  All of the equipment for the large scale production of ice cream was explained in a clear and interesting way.  It was fascinating to see it in action, and to see the amazing rate at which the pints are produced.  Finally we made our way into the flavor room where we were able to sample the day’s flavor, which was triple caramel.  I only took one taste because I was hoping to save room for what I was about to attempt… 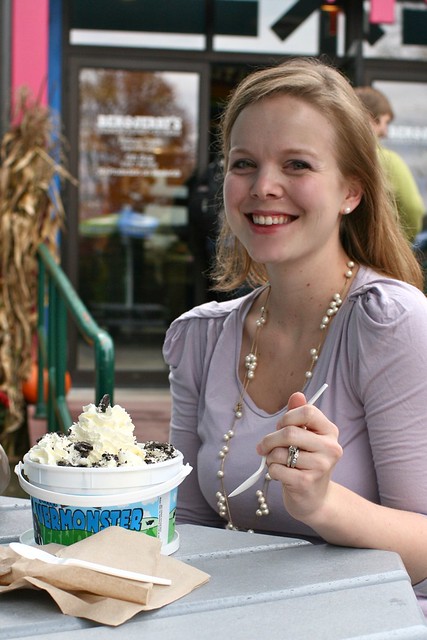 So, as I mentioned, it has been a goal of mine to eat the Vermonster sundae.  I know this seems crazy to, well, almost everyone I talk to, but hey, it’s always been a dream of mine.  I didn’t want to attempt the full sized Vermonster on this trip, mainly because I psyched myself out of it, but also because I’m waiting to do it with my best friend Amanda since we share this goal.  (We can DO IT!)  Instead I decided to try the mini Vermonster but as you can see, it isn’t really mini at all.  Four scoops of ice cream, a brownie, a cookie, and two kinds of toppings.  For my ice cream scoops I chose half coffee (fine) and half double fudge brownie (really bad decision).  Here I am at the beginning, happy and confident. 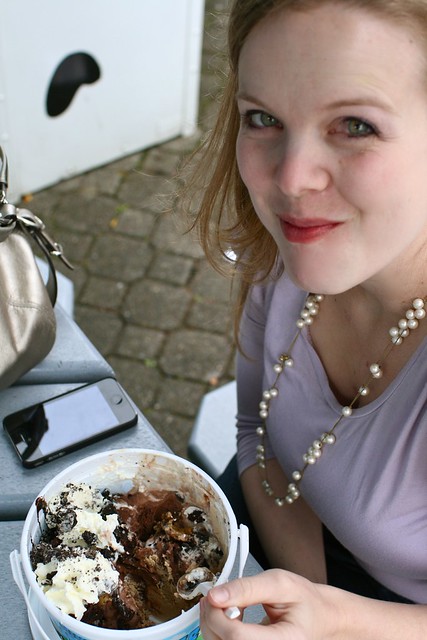 Here I’m pretending I’m happy, but I’m starting to crack.  I had a lot of factors going against me here.  First of all, we were sitting outside and it was really cold.  We could have gone inside but I didn’t want other people watching this go down and that giant bowl attracts a lot of attention.  (Amanda, I will feel better when you’re with me and we can be fools together!)  Second, I ate way too much for breakfast that morning.  Third, and what I think was my undoing, was choosing the double fudge brownie ice cream.  It was so heavy, so rich, and I just couldn’t stomach it.  Also, because of the cold and to avoid people watching me, I tried to go way too fast.  I really should have paced myself. 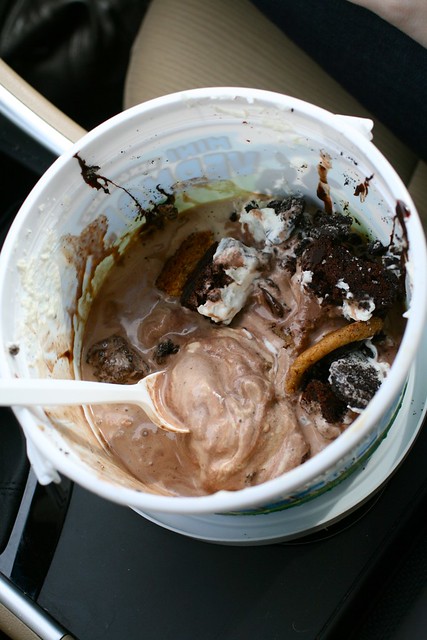 We made a last ditch attempt to salvage my quest and moved to the car where it was a little bit warmer.  But, this is where I stopped.  So close!  I probably could have eaten even more but at that point I knew I wasn’t going to make it so I figured it made more sense to stop before I felt horribly sick. 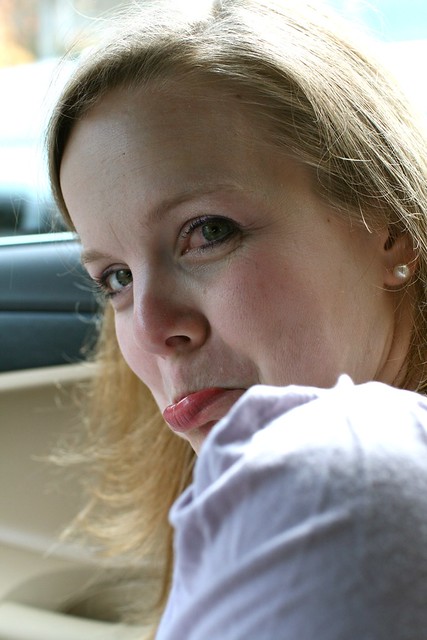 Sadness.  (By the way, I was not crying or anything, but had a lovely raging red eyeball after catching pink eye from the kids a few weeks before.  I actually still have it.  Dislike.) 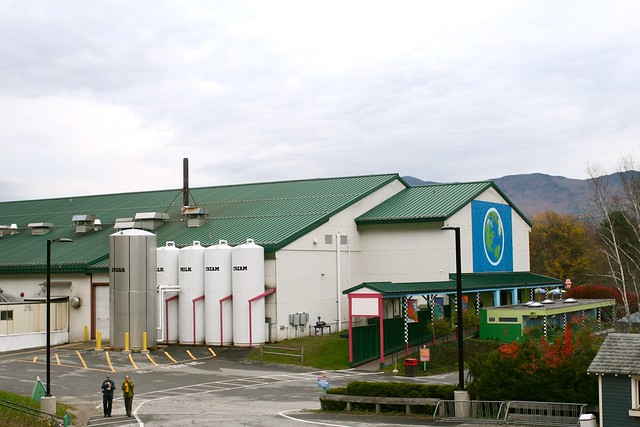 But, instead of leaving on that sad note, we decided to get out of the car and walk around some more because there was a bit more to see.  We walked up the hill and were able to see the factory from behind, with their cute tanks labeled “milk”, “cream” and “sugar”. 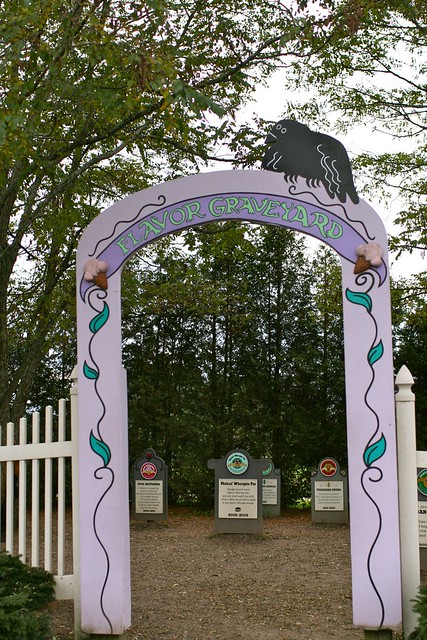 Up at the top of the hill was the Flavor Graveyard where, as they put it, they pay respects to some of their dearly departed flavors. 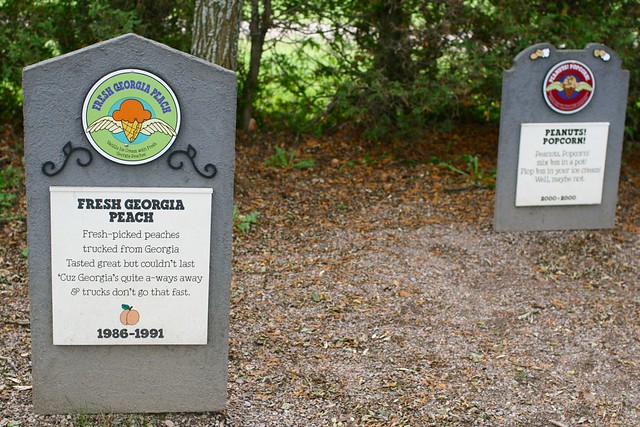 The headstones included the names of the flavors, sometimes a description, and usually the reason that the flavor failed (cost, ingredients, popularity).  It was so funny! 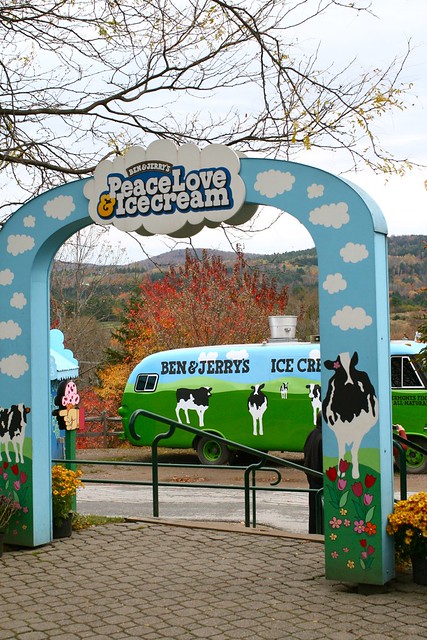 And that was it.  I am sad I wasn’t able to beat even the mini Vermonster, but I’m glad I had this practice run so I’ll be prepared for next time.  And there definitely will be a next time. 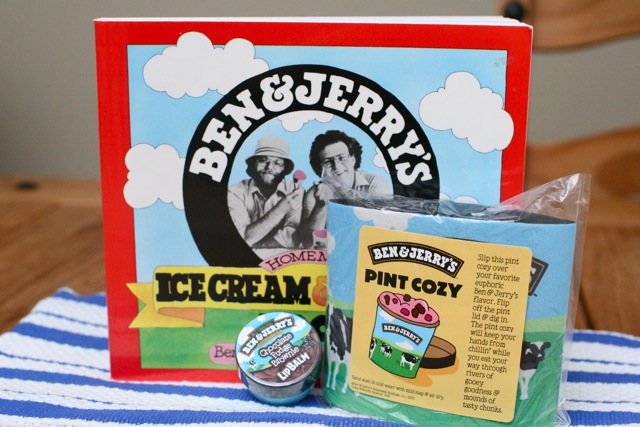 I didn’t mention it before, but their gift shop was killer.  So much fun stuff, I could have easily browsed for an hour.  I got some things for you!  You can win a copy of the Ben & Jerry’s Ice Cream Cookbook, this fun “pint cozy” (which could probably also serve as another type of cozy), and a container of chocolate fudge brownie lip balm!  (To be perfectly honest, I have no idea if this stuff is any good or not but I still haven’t gotten my stomach around to the idea of trying the one I bought for myself.)

To enter the giveaway, please leave a comment on this post telling me your favorite flavor of Ben & Jerry’s ice cream.  If you’ve never tried it (gasp!), take a peek at their offerings and tell me what you’d most like to try.

The Rules: One entry per person, U.S. residents only.  Commenting will close on Saturday, November 19 at 10:00 am.  One winner will be selected at random and announced next week.

Full disclosure:  This giveaway is sponsored by yours truly.