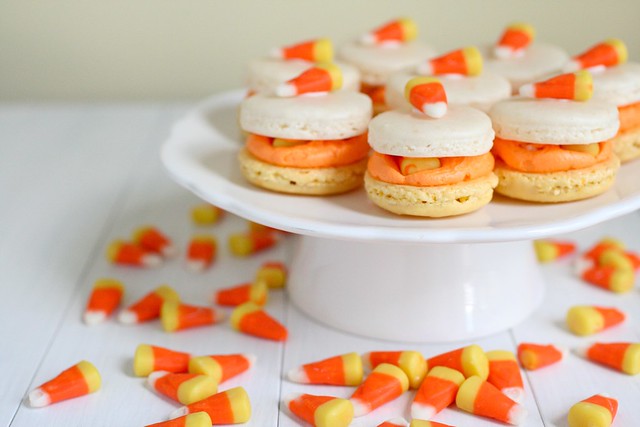 I’m kind of a stubborn person.  (Yeah, Ben’s totally rolling his eyes at the “kind of” right now.)  Once I get an idea in my head, it takes a lot to get me to give up on it.  Sometime over the past couple of months I had the idea for making candy corn macarons, and true to form, I just couldn’t let that idea go.  Even after three failed sets of macaron shells and three separate attempts at the filling, I kept working at these until I finally ended up with something that gave me the end result I was looking for.  A minor pet peeve of mine is seeing all manner of “candy corn” treats around Halloween that aren’t candy corn flavored at all and merely mimic the yellow-orange-white color pattern.  I thought the idea of candy corn macarons was a fun one but getting the flavor into them was more than a little challenging.  In fact what I ended up with are plain mac shells, vanilla buttercream, and candy corn sandwiched in the middle and on top for decoration.  It wasn’t the first idea I had but you know what?  It works. 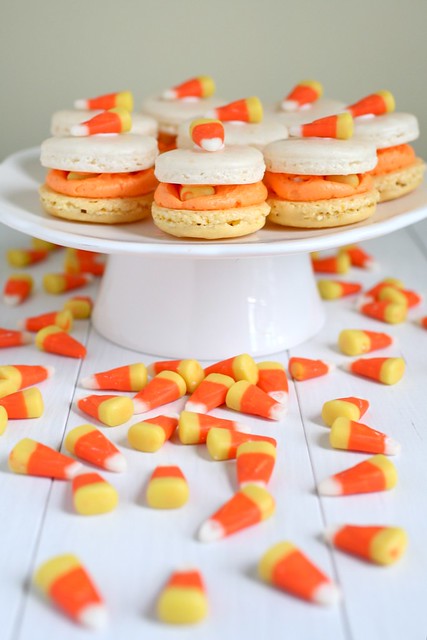 Oh, and those failed shells I mentioned?  Yeah, just when I thought I was really getting the hang of macarons and maybe they weren’t so bad, my last three or four pans had been downright flops.  I tried changing all sorts of variables – silpat vs. parchment, higher temperatures, different oven racks, etc.  Nothing really helped.  The way I got these to work was actually a complete mistake.  After my third attempt flopped on the first pan, I shut off the oven in frustration while the second pan was still inside.  They had only baked at full temp about 6 minutes, and then stayed inside for about two hours until I went to remove the pan and was shocked by perfectly formed shells.  So in case you are having issues with too much moisture sabotaging your macarons, this is another strategy to try.  I have written the version below assuming all goes as planned for normal macarons should go but just know this is a possibility.  As much as I don’t love kitchen failures, I certainly learned a lot from this series, and ended up with some pretty tasty cookies as a result.