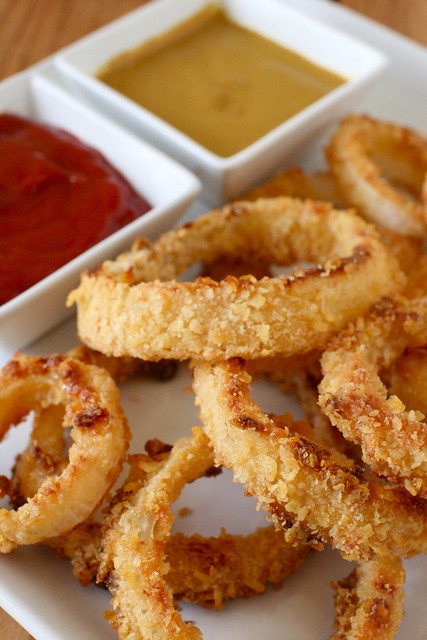 I have murky memories of the first time I ever tried onion rings.  I was a kid, probably seven or eight, and we were at a restaurant that had onion rings on the menu.  I glanced over the name with mainly disgust and a smidgen of curiosity, and moved right along (probably to nachos or pizza).  I can’t remember who I was with, but someone at the table actually ordered this unthinkable dish.  I must have expressed my surprise because they then tried to convince me that onion rings were, in fact, very good.  I think they even said better than French fries.  Come on now, let’s not exaggerate.  Anyway, when our food finally arrived this persuasive devil convinced me to try one (who was this person?!  I wish I could remember).  I grudgingly agreed that they were pretty good, but I would still never choose them over French fries. 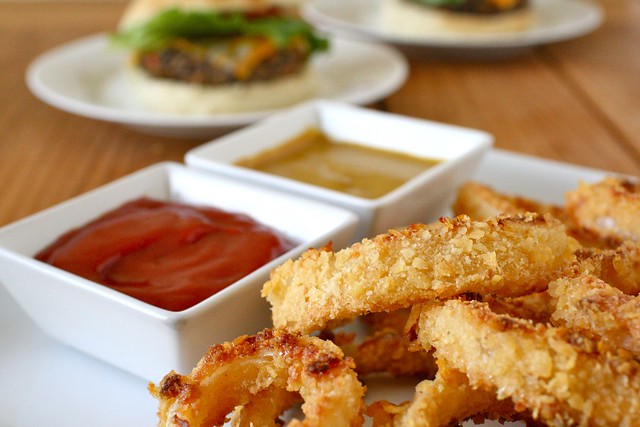 Though I still pick French fries over onion rings, I have a husband who loves onion rings and has asked me to make them on numerous occasions.  I pretty much always turn to Cook’s Illustrated when I’m in need of a reliable recipe, and I had bookmarked this one a year ago with Ben in mind.  Now don’t go thinking that just because these are made in the oven, they are a healthified version of onion rings.  They still have plenty of oil and are coated with a potato chip crust…yeah, I told you.  Of course you might feel a little better about the whole thing if you choose to serve them as we did with bean burgers instead of regular hamburgers.  I really liked this method though, and all of us thought the outcome was fantastic.  The onions were cooked through but the coating was crispy and browned, just as it should be.  Even Andrew devoured them without batting an eye (though he eats practically anything I put on his plate, so I guess I shouldn’t be surprised.)  I doubt I’ll be making them again anytime soon since this is a once-a-year kind of indulgence, but I think we’ll all be looking forward to when that day rolls around again.