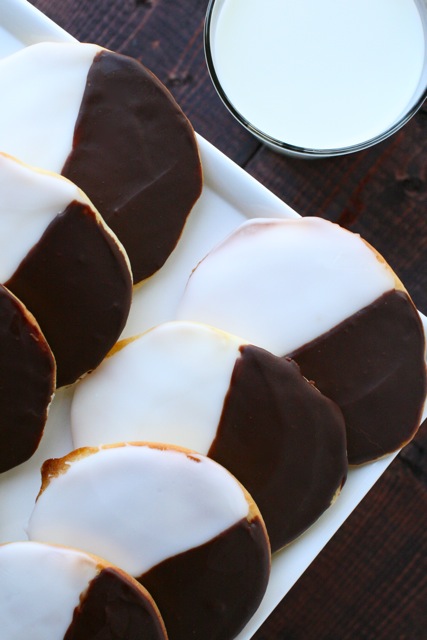 The first time I had a black and white cookie, I was in my first trimester of pregnancy with Andrew.  Ben and I went to have breakfast at a favorite bagel place in our hometown.  Apparently a large bagel and a chocolate milk weren’t quite enough to sate my already heightened appetite, and so I wandered back over to the pastry case.  My eyes immediately zeroed in on a black and white cookie as big as my head…really, I’m not exaggerating.  I bought it and snacked on it on the way back to the car and on the drive home.  The problem was that pesky Ben kept asking for bites when I really just wanted to devour it all on my own.  Eventually I wrapped it up, stuck it in my bag, hid it, and told Ben it was all gone.  (Mature, I know.)  Well, I hid it so well that I didn’t find it again until at least a couple of months later.  (Don’t worry, that wasn’t my regular purse.  Ha!)  When I found it again my knee jerk reaction, instead of the expected disgust at finding a two month old cookie, was major disappointment that I had not finished the whole thing.  It was one great cookie. 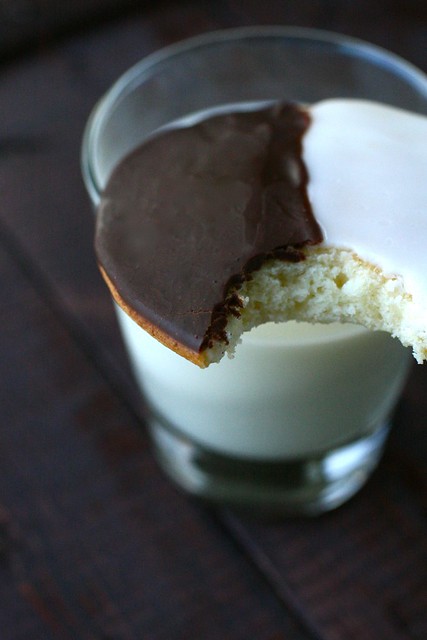 I have since been unable to find a black and white cookie that did justice to that fantastic bakery concoction.  And yeah, I know, it was from Indiana and not NYC but I’m telling you, it was great.  I’ve tried a few recipes at home but none have lived up to that infamous giant cookie.  This version, though, is finally one that I deem good enough to make again (and again).  The cookie is really more cake-like than cookie-like in texture, with just a hint of lemon flavor, and the whole thing is glazed with half vanilla/half chocolate topping.  I generally eat them symmetrically but end up saving a little more of the chocolate half for the end because, let’s face it, the chocolate is totally the best part.

One of my best friends, Shanon of The Curvy Carrot, moved away from me this year (::tear::) and though we’re in touch every day via text, email and phone calls, we decided baking together once a month would be a great way to stay connected.  This was our first joint baking adventure and I think we were both happy with the results.  Stay tuned to see what we baked together this month…it’s another good one!