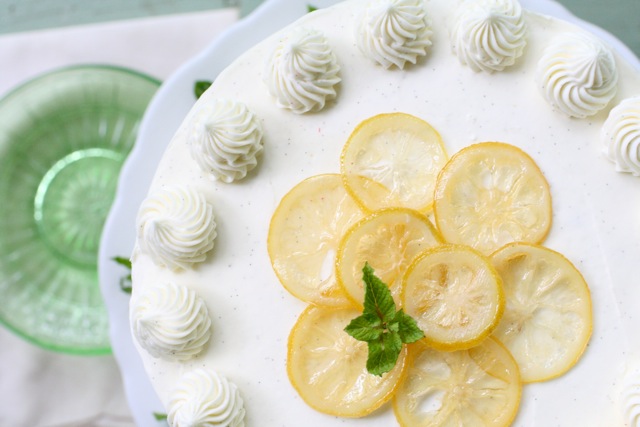 If you’ve been following me for a while, you’re probably aware of my feelings regarding lemon desserts.  In the past, they were totally negative.  Over time, I’ve really grown to appreciate lemony sweets and such but even so, they are almost never my first choice.  Give me a super chocolatey something or fruity dessert any day.  Lemon is essentially a bottom-tier choice for me personally, and it only ranks above things I just don’t like such as anything involving mint.  However, a few months back I made a couple of cakes with lemon tiers.  I didn’t have a go-to lemon cake at the time so I adpated my favorite vanilla bean cake recipe to be lemon flavored instead.  The funny thing was that when all the cakes were leveled and Ben and I snacked on the scraps, we found that the lemon was our favorite flavor of all.  It was something to keep in the back of my mind, for sure, but I still wasn’t about to whip up a lemon cake for no reason.  I still have lots of chocolate to eat after all. 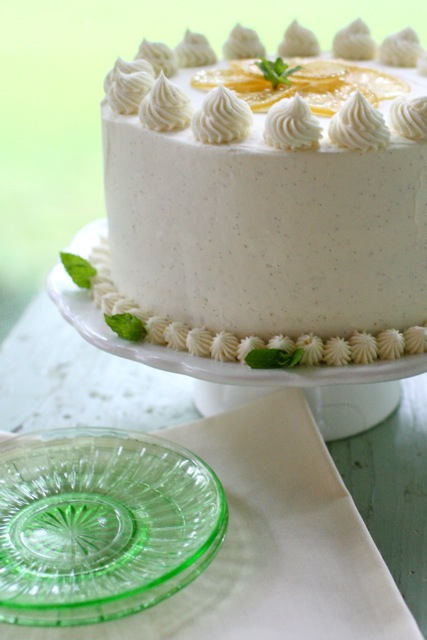 When I asked my dad what kind of cake he would like for his birthday this year, I was expecting his usual order – German chocolate.  Imagine my surprise when (1) he really thought hard about his decision, and (2) he asked for something lemony.  He’s always liked lemon desserts but they have never trumped German chocolate before.  I was excited at the prospect of doing something new, and getting to further develop the concept of a lemon layer cake. 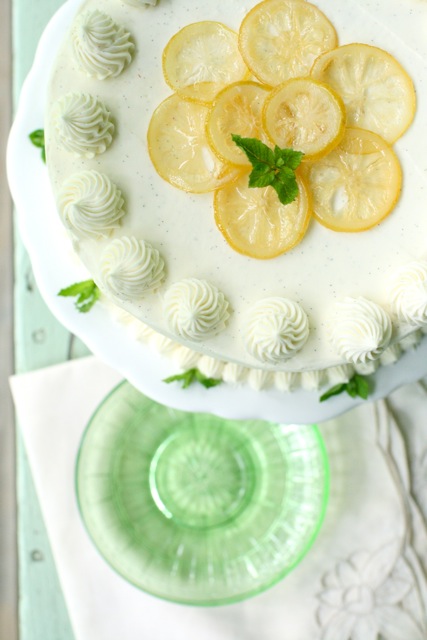 Die-hard lemon lovers would likely use lemon curd for the filling between the layers and though I considered this, I ultimately decided to go a different direction because lemon curd is typically unappetizing to me.  I liked the idea of a lemon mousse type of filling so I search high and low for something that would work.  After scouring my cookbooks and the internet, nothing I found caught my eye so I decided to wing it.  What I came up with was a light, lemony whipped mascarpone filling that ended up being Ben’s favorite part of the cake.  A lemon frosting would have been a logical choice, but instead I opted for a vanilla bean buttercream to provide a complimenting contrast (and, let’s be honest, because I can’t resist seeing those gorgeous flecks of vanilla bean in creamy white frosting).   The combination of the soft lemony cake layers, whipped lemon cream filling and the vanilla bean frosting made for a cake that thrilled both the lemon lovers and the lemon just-okay-ers.  Lemon was definitely the star without being in-your-face strong.  I garnished the cake with candied lemon slices as well as mint leaves, and they really made the presentation.  As for the birthday boy (normally not a sweet tooth), he reported that he finished the cake over the rest of the week, even enjoying a piece for breakfast one day.  I’ll call that a success.

Note: Don’t be intimidated by the candied citrus!  It takes just a couple minutes of work and adds such a nice touch.  I’ll admit I was afraid to try a piece but I actually really liked it.

*Note: This will make a bit more frosting than you need for the cake.  You can scale it down a bit or just have left over frosting…always a good thing in my book.

Directions:
To make the cake, preheat the oven to 350° F.  Butter and flour the edges of 3 8-inch round cake pans and shake out the excess.  Set aside.   Line the bottoms of the pans with parchment paper.

In a medium mixing bowl, combine the cake flour, baking powder and salt.  Whisk together and set aside.  Add the butter to the bowl of an electric mixer fitted with the paddle attachment.  Add the lemon zest to the bowl of the mixer with the butter.  Beat on medium-high speed for 3 minutes, until light and creamy in color.  Scrape down the sides of the bowl and beat for one more minute.

Divide the batter between the prepared baking pans.  Bake until golden and a toothpick inserted in the center comes out clean, about 20-22 minutes, rotating the pans halfway through baking.  Let cool in the pans about 10 minutes, then invert onto a wire rack and let cool completely.

To make the filling, combine the mascarpone and butter in the bowl of an electric mixer.  Beat on medium-high speed until smooth and well combined.  Mix in the confectioners’ sugar and beat on low speed until incorporated.  Blend in the lemon extract and lemon zest.  Increase the speed to medium-high and beat until light and fluffy, about 2 minutes.  Transfer the mixture to a medium bowl and set aside.  Wipe out the mixer bowl and fit with the whisk attachment.  Add the  heavy cream to the bowl and whip on high speed until stiff peaks form, being careful not to overbeat.  Mix about a third of the whipped cream into the lemon-mascarpone mixture to lighten.  Gently fold in the remaining whipped cream until no streaks remain and the mixture is evenly blended.

To make the frosting, add the butter to the bowl of an electric mixer fitted with the whisk attachment.  Whip on medium-high speed until smooth, about 1 minute.  Add the confectioners’ sugar to the bowl and mix on medium-low speed just until incorporated.  Scrape the seeds from the vanilla bean pod into the bowl and add in the salt.  Continue to beat on medium-high speed until smooth, about 1-2 minutes.  Mix in the vanilla extract and heavy cream on low speed just until incorporated.  Increase the mixer speed and whip on high speed until light and fluffy, scraping down the bowl as needed, about 4 minutes.

To make the candied lemon slices, wash and dry the lemons thoroughly.  Use a sharp serrated knife to make very thin slices of lemon.  Poke out any seeds in the slices with a toothpick.  Combine the sugar and water in a medium saucepan over medium-high heat.  Heat the mixture until the sugar dissolves.  Add the lemon slices to the mixture so that they are in a single layer (none overlapping), reduce the heat to medium-low and let simmer about 20 minutes, turning the slices at least once so both sides are candied.  Remove from the heat.  Store in a container with the syrup until ready to use.

(Level cake layers if necessary.)  To assemble the cake, place one of the layers on a serving platter.  Top with half of the lemon-mascarpone mixture and smooth in an even layer.  Place a second cake layer on top of the filling and top with the remaining filling.  Place the final cake layer on top.  Frost the top and sides of the assembled cake with the vanilla bean frosting.  Use a pastry bag with a decorative tip to pipe accents on the cake.  Garnish with the candied lemon slices.