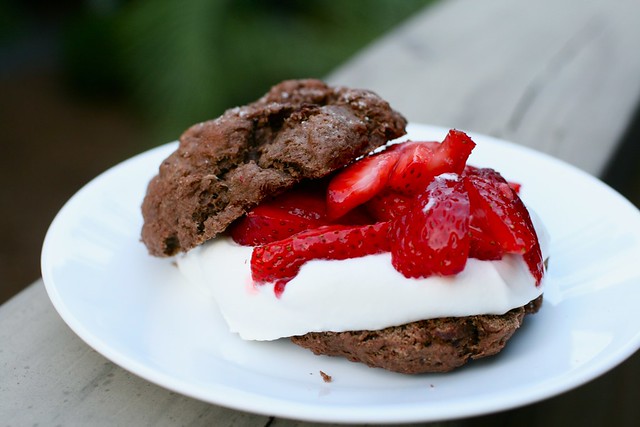 The first time I saw chocolate shortcakes, I immediately wondered, “Why didn’t I think of that?!”  It’s a brilliant idea of course.  Chocolate pairs so well with strawberries and I can’t think of many desserts that aren’t improved by a dollop of whipped cream.  It just makes sense.  And, as is so often the way, as soon as I saw my first chocolate shortcake, I started seeing them everywhere.  Except most of them weren’t really shortcakes at all.  Some were more like brownies or puffy cookies sliced in half and sandwiched with the usual fillings.  While that still sounds great, it was a true shortcake that interested me.  A barely sweetened biscuit with chocolate flavoring.  After excessive searching through the interwebs, cookbooks and magazines, I realized that I needed to look no further than one of my most trusted baking books, Dorie Greenspan’s Baking: From My Home to Yours.

Shortcakes are one of the first desserts that I turn to when I am working with minimal kitchen equipment, so I made these one evening for dessert while we were on vacation.  The members of Tuesdays with Dorie had made these cakes at some point, so I made sure to read through some of the members’ reviews.  I followed Bridget’s example and added some chopped chocolate into my biscuits to be sure the chocolate really came through.  Good call, Bridget.  The biscuits were still just what I was hoping for but I think the added chocolate provided a little extra oomph.  As much as I love a classic strawberry shortcake, I’m definitely digging the chocolate version too.

For the strawberries:
1½ lbs. strawberries, hulled and sliced or quartered
3-4 tbsp. sugar
Squeeze of lemon juice