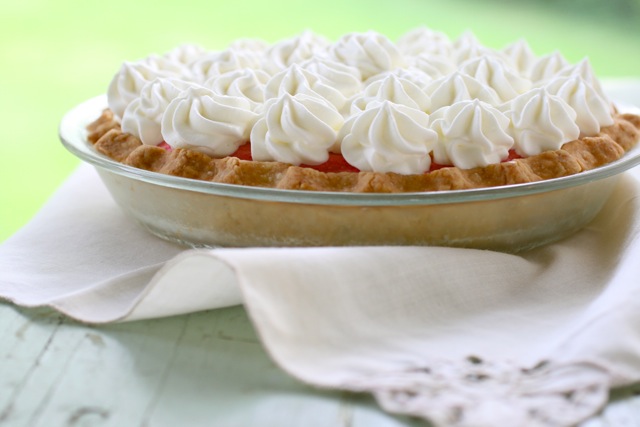 I don’t know about you, but for me one of the biggest challenges in trying new recipes is finding any new-to-you ingredients that are required.  This pie is a perfect example.  It calls for Sure-Jell, which I now know is a fruit pectin used in canning.  If only I had bothered to Google it sooner, I would have known where to look for it.  But instead, thanks to the “Jell” in the name, I assumed it was a relative of Jell-O, and so I searched in that aisle over and over, hoping maybe, just maybe, this time it would be there.  That went on for two years.  This spring when I saw this fresh strawberry pie which also called for Sure-Jell, I knew it was time to find the stuff even if it meant ordering it.  But brief investigation led me to find that Sure-Jell had been there all along, just a few aisles away from where I had been looking. 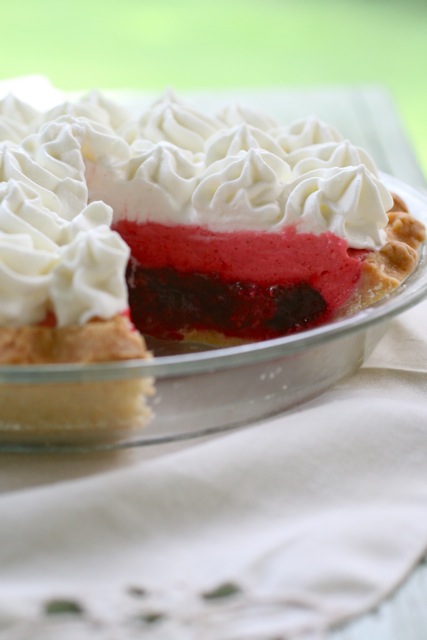 Well, that made me feel like a total moron but I couldn’t feel sad for too long because I was able to make some awesome pies.  This pie starts with a butter and cream cheese-based pie crust that I have often heard referred to as a cheater or no-fail pie crust.  I don’t really think it’s all that much easier than a regular pie crust, but it was absolutely delicious and is certainly something I would use again if I had extra cream cheese in the fridge to use up.  The crust is filled first with a fruit layer, then a raspberry chiffon layer, and finally topped with pillows of freshly whipped cream before serving.  After waiting two years to try this pie, I can say that it was worth the wait and definitely lived up to my expectations.  The raspberries and cream flavor combination is light, fresh and fruity, and makes this an ideal dessert for summertime.