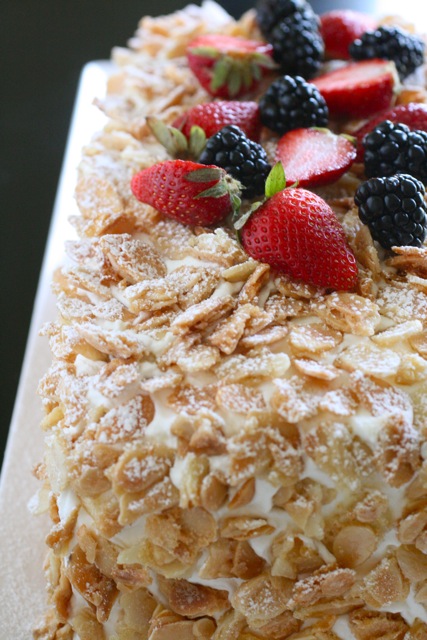 I’ll admit I’ve never tried a classic tres leches cake before.  It just didn’t seem like something I would like.  Mostly, I think it would be due to textural issues.  I have always been a bit wary of dishes with mushy textures (bread pudding, French toast, etc.)  Not to mention, traditional tres leches cake is often fairly…we’ll say homely looking, and if you’ve been here long, you know that I tend towards pretty desserts.  When I first saw this cake in my Pastry Queen cookbook, it didn’t even register that it was a souped up version of a tres leches cake.  All I saw was an awesome looking confection and I knew I had to try making it.  Only later on did I realize what it really was, but this seemed like a version I could get on board with. 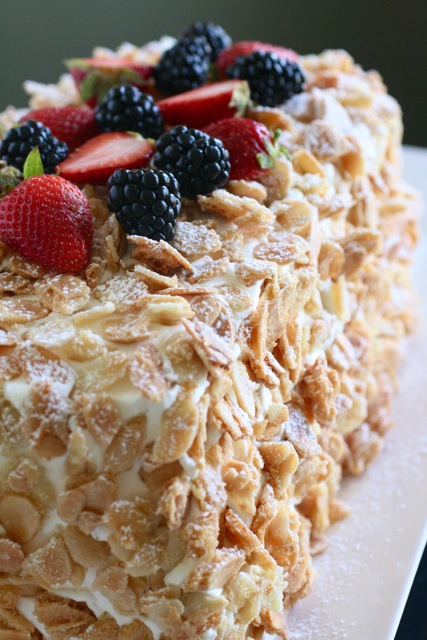 An almond sponge cake with a hint of cinnamon is brushed with the soaking liquid which, in addition to the usual tres leches suspects, contains dulce de leche and cream of coconut.  Double yum.  The whole thing is covered in a whipped cream frosting and then garnished with sugared almonds.  They are lightly sweetened and toasted, and add a really nice textural contrast to the cake as well as visual interest.  Plus, you can use one of my favorite decorating tactics here – flinging the almonds at the frosted cake to help them adhere.  Fun times!  I will note that the original recipe must make an insanely large cake.  The version I made was 2/3 the original recipe, and that was still huge.  The version I am posting below is actually a half recipe because I cannot imagine anyone ever needing a cake in the original quantities.  Not to mention, the ingredients for the full cake would be incredibly expensive.  It called for 8 cups of almonds (!) and 18 eggs, among other things.  Also, a quick note regarding the sugared almonds – these took much, much longer to bake than the original recipe indicated.  This part is really best done by checking frequently until the almonds are lightly browned and crispy, not gummy from the egg whites.  I found that breaking them up slightly and turning them over helped with the process. 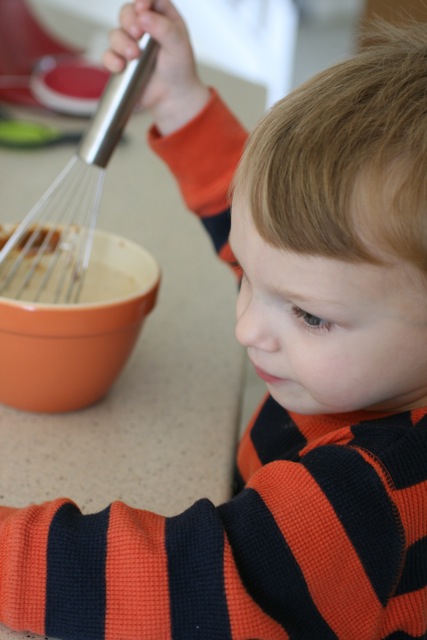 On a related note, Andrew is starting to really enjoy helping me in the kitchen.  He was very involved with the making of this cake, and we had a blast baking together.  Look at my sweet little helper whisking away!

adapted from The Pastry Queen by Rebecca Rather