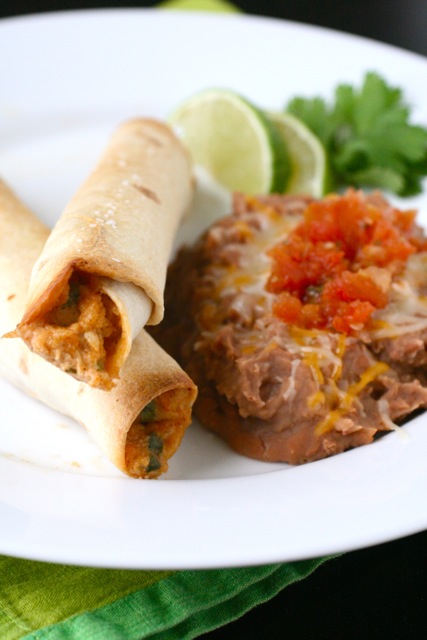 This recipe is one that has been circulating the blogosphere for quite a while now.  I first saw it on my friend Nikki’s blog, and I’ll admit that back then, I kind of laughed about it and continued on.  To me, taquitos were a packaged food from the freezer aisle of the grocery store.  Ben would always want to buy them, I would always refuse…it became kind of a joke between us.  One day I finally caved and he was pretty excited to have them all to himself since I wasn’t interested.  I don’t think they quite lived up to his expectations though because he didn’t ask for them as much after that.  So when I saw this recipe I thought eh, whatever, and moved right along.  But then I started seeing it pop up all over the place and thought maybe they were better than their store-bought counterparts – they must have been to deserve all the hype.

You know where this is going…I made them.  We loved them.  In particular, Andrew reeeally loved them.  He ate as much as I did that night for dinner, and the next night with the leftovers.  The filling is a very basic mixture that is definitely a great foundation for additional mix-ins you might enjoy.  I am thinking about adding black beans, corn and maybe some roasted red peppers to the mix.  Not only will it up the nutritional value, it will help stretch the amount of filling farther, meaning more taquitos for everyone – hooray!  A definite bonus about this recipe is that the taquitos can be assembled, frozen and then baked from the freezer, making them ideal for a quick dinner or as a party food that you can make well in advance to cut down on day-of prep.  In fact I’m making the food for my brother’s graduation party next week and these will be making an appearance.  I can also see these being very popular come football season.  Enjoy!

Pennies on a Platter, originally from Our Best Bites