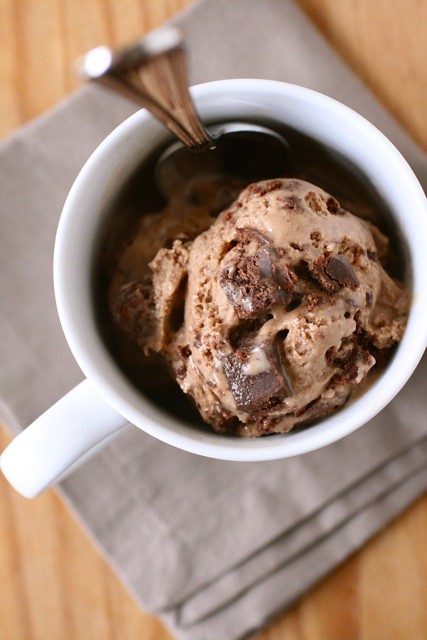 I have turned into a cliché pregnant woman, and I did not see this coming.  I have always tried not to be one of those who uses pregnancy as an excuse for everything, like saying you are “eating for two” so you eat with reckless abandon when you really only need 300 more calories per day than normal.  I try never to send Ben out to stores or restaurants to satisfy sudden cravings, since they usually pass quickly enough on their own.  But last week was different.  We had had desserts in the house and everything was fine, and suddenly one night I found myself without dessert and a chocolate craving so bad, I decided to break my own rule just this once.  I sent Ben to the store in search of some ice cream and he was happy to oblige.

You must understand how dire the circumstances were – I literally have not bought ice cream from the store since getting my ice cream maker three years ago.  I gave him some flavor suggestions but figured he knows me well enough to know what I like.  He came back with cookie dough.  Now, I love homemade double cookie dough ice cream but store bought cookie dough is totally not worth the calories in my book.  I was frustrated.  I might have cried (though I’ll admit that several other upsetting things happened that day and this was the last straw, so to speak).  Thankfully he did pick up some good quality milk chocolate as well because I had mentioned that I wanted to make this ice cream again soon.  So as it turns out, I did get my super chocolatey ice cream and satisfy my craving – just a day late, but this ice cream more than made up for it.

The Perfect Scoop by David Lebovitz