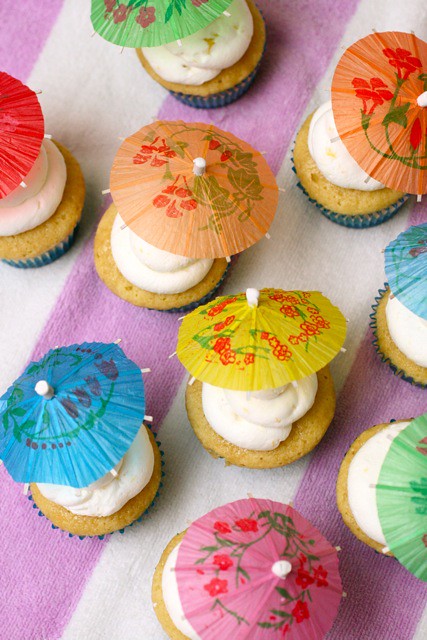 One of my good friends, Adam, just happens to be one of the biggest fans of my birthday cupcake effort at work.  It seems that he’s always contemplating what his next birthday choice will be.  I’m pretty sure he had something else in mind this time but when he saw rum punch on the menu, he was intrigued.  The truth is, I was too.  This was nothing more than a flavor idea I had but no concrete recipe plan.  The one thing Adam did request, similar to last year, was that I “challenge the laws of physics and fit as much booze as possible into one cupcake.”  With that in mind, I went to work.  Ever since buying Ready for Dessert by David Lebovitz, I’ve had my eye on his Bahamian Rum Cake.  It is originally meant to be a bundt cake but I made it into cupcakes (with a bit of rum added to the batter, of course), brushed with a rum glaze and then just straight rum to really up the booze content.  The cupcakes are topped with a simple pineapple-rum whipped cream frosting, and fun little cocktail umbrellas are the finishing tropical touch.  (A piece of pineapple and a cherry would look great too.) 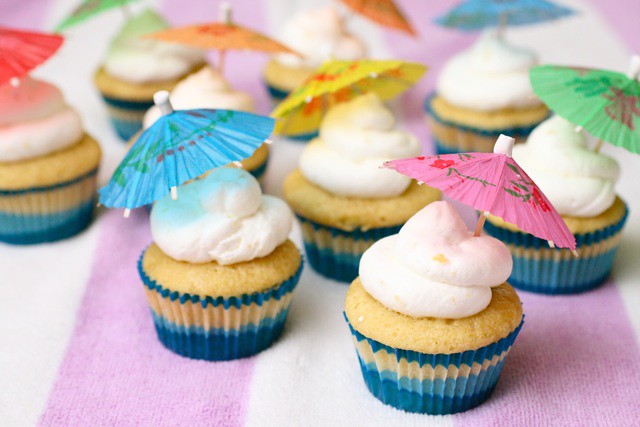 As with all spirited cupcakes, I find that everyone has completely different levels of taste tolerance.  Some think they were too strong, and though Adam didn’t tell me I am sure they weren’t quite strong enough for him.  I only tasted a few bites but Ben and I both thought the amount of rum, at least for us, was just right.  Definitely enough to be a prominent flavor but not so much we needed a chaser afterwards.  All in all, I think these cupcakes have earned their name – and also made me crave a real rum punch.  Won’t be long now until I can enjoy one!