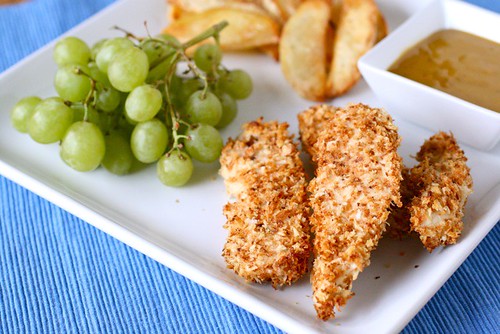 Is that a child’s plate you see above?  No, it was mine.  But this meal was made with my little boy in mind.  You see, we have reached the difficult stage of toddler eating behavior.  (Well, truth be told, we reached it quite some time ago.)  I have spent way too many hours stressing about and over-analyzing his behaviors, all to come to the conclusion that he is a normal toddler and this is just part of it.  We have learned that he is not actually picky but the food battles we encounter with him are about control.  It’s even more obvious when we see him eat anything under the sun if my dad is the one feeding it to him.  We have all sorts of strategies to get through our meal times with him.  While we always make him try a few bites of what we are eating, we don’t want meals to become a negative experience due to force feeding attempts.

Even though my little man has shown quite varied tastes in general, one typical toddler thing about him is his love of chicken nuggets and fries.  Since I’m not about to pull a bag of fries or nuggets out of my freezer, this meal is my alternative.  It is one of a handful of meals that I can make and know with certainty that all three of us will be eating it without complaint or drama.  That kind of peace is so valuable, it makes me want to put this on the menu every week.  The baked oven fries seen above are an ideal compliment to the chicken strips, not because of taste but also because they bake at the exact same temperature on the opposite oven rack.  It’s like these two things were meant to be made together!