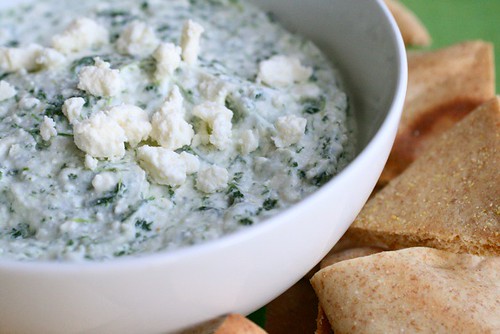 So here’s the deal – professional football has completely fallen off my radar.  Ever since the Colts embarrassed themselves right out of the first round of the playoffs, I have had no real interest.  I’ve half watched some of the games but I just don’t care anymore.  I’m already ready for next football season.  But I know there are some of you out there who definitely do care, or at the very least plan on hosting (or attending) a Super Bowl party to watch the game.  I made this dip for you.  Dips seem to be the quintessential football watching food and this spinach feta dip is a slightly different spin on a classic spinach dip.

The best thing about this dip, other than the taste of course, is that it takes literally minutes to whip up.  If you have a food processor or immersion blender, this is a 10 minute or less kind of snack.  I served it this weekend as an appetizer when we had some friends over for dinner.  It is extremely convenient to make something so low maintenance, particularly when you just got back from yoga and you still haven’t changed clothes and you are making a very involved main dish and your guests are arriving in 10 minutes and your child is begging for some strawberries and well…you get the idea.  Incidentally, homemade pita chips are also unbelievably easy to make and require little effort.  Basically, you slice the pita in half horizontally, cut into wedges, spread on a baking sheet, spray light with oil, season as desired and bake at 350˚ F until crisp and golden, flipping halfway through baking.  I made the pita chips earlier in the week so I was able to just throw them onto a plate and serve.  Easy peasy and it all received rave reviews.  Even if your team gives you nothing to celebrate, at least the dip will be a win.