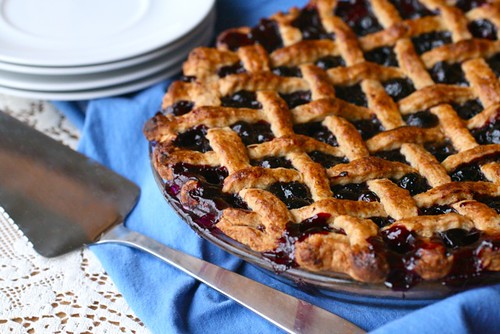 Still undecided on what pies to serve for Thanksgiving?  Or maybe you are looking for something slightly different that the traditional choices.  Look no further, this pie has got you covered.  The moment I saw this in November’s Bon Appétit, I began searching for an opportunity to make it.  Blueberry pie is already my very favorite type of pie so adding cranberries to the mix sounded like a deliciously genius idea.  My Thanksgiving menu was already planned and there was no room (or time) for another pie to be added to the list.  Thankfully we had friends over for dinner this weekend so I jumped at the chance to give it a try. 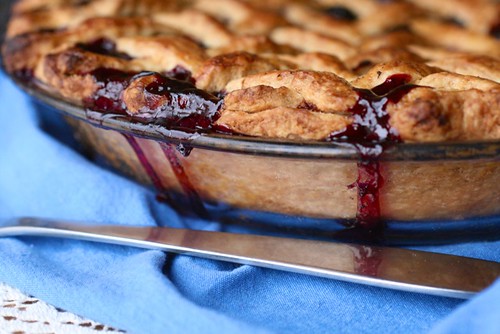 The steeping of the filling with cinnamon sticks and sprinkling of grated nutmeg over the assembled pie, in addition to the cranberries, put a perfect seasonal spin on this classic summer pie.  And in case you’re worried about the fact that blueberries aren’t exactly in season right now, don’t worry because this recipe calls for frozen berries.  The filling was just as awesome as I had hoped – very juicy, but it still stayed intact when the pie was sliced.  Not too sweet or too tart but just right as Goldilocks would say.  And bonus – all the cranberries and blueberries means this pie is full of antioxidants.  Certainly still not health food but hey, extra antioxidants are never a bad thing.  Keep in mind that both the filling and the crust can be made in advance and then assembled when you are ready to bake, so that provides some flexibility in this recipe.

Stay tuned tomorrow for a step-by-step lattice crust tutorial.  If you have been afraid to attempt it before, fear no more!  It’s easy as *pie* (sorry, couldn’t resist!)