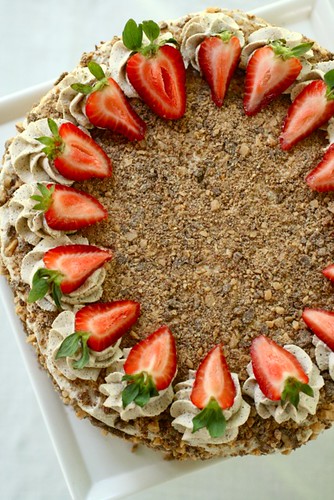 Say hello to the richest cake I’ve ever made.  Really, I know I’ve made some doozies in the past, but I think this one takes the cake (pun intended).  Ben’s birthday was a couple of weeks ago, and when I asked him what sort of cake he would like, he said anything would be fine and I could choose.  I immediately began scouring my ridiculously long list of recipes to try but I didn’t get very far when I saw this cake.  Ben just loves toffee so I knew this would be the perfect thing.  Plus, I made him a different brownie torte last year for his birthday and that went over very well. 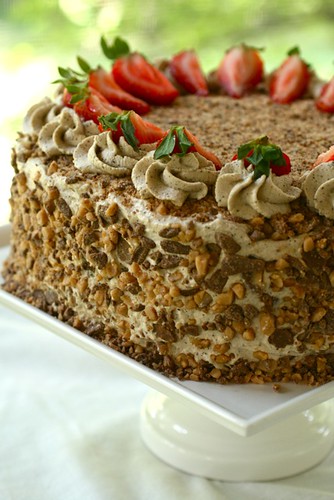 So, what’s the big deal about this cake?  It consists of three layers of fudge brownie sandwiched with espresso mascarpone filling which is then frosted with an espresso whipped cream and coated in toffee bits.  And for starters, just the brownie layers alone call for a pound of butter, a pound of chocolate, and eight eggs.  I think Paula Deen just gasped.  After I got over the initial shock of the ingredient list, I decided to just go for it.  I knew it would be served at a large family gathering so there would be plenty of people to help eat it.  It really is every bit as delicious and rich as you might imagine.  It seemed like the house was filled with moans, groans, “mmm’s” and “yums” all throughout dessert.  Even after our fairly large crowd was all served, there was close to half the cake left.  Trust me, only a very thin sliver is plenty. 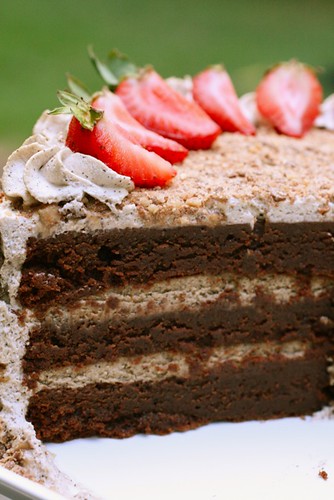 Despite its looks and multiple components, this comes together pretty easily.  There is no need for frosting it very carefully since the whole thing ends up covered in toffee bits.  You can use whatever technique works for you to get the toffee bits on the sides.  Personally I prefer a Jackson Pollock-style approach because it’s just so fun, and then I fill in the holes with a little more care.  It makes quite a giant mess but it’s worth it :)

The Pastry Queen by Rebecca Rather